In a hastily arranged promotion on a cold afternoon at Dunkalk FC in Ireland in 2011, a middle-aged man won in a raffle the chance to play snooker against six-time world championship finalist Jimmy "Whirlwind" White. 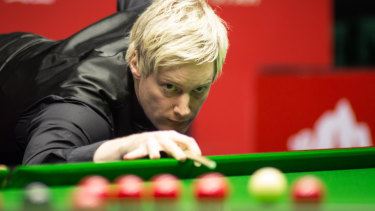 Introducing himself only as "Tornado" Terry, he sent "the missus" to the car to get his cue. But he never got to use it. Before he could play a shot, White cleaned up the table: all 15 reds, followed by the black each time, then the colours for the maximum break, 147.

"In truth, he butchered the blue," wrote promoter Jason Francis. "It went in, but he was straight on the pink and didn't have an angle at all."

Duffer! White recovered to complete his perfect break, delighting the crowd, but winning nothing for himself, no car, no cash, "not even a cheese sandwich".

As for "Tornado", Francis wrote: "We'll never know how good a player Terry was, and maybe that's how it should be. He's part of snooker history, too."

Breaks of 147 are commonly uncommon, occurring roughly four times a year. There were two this week at the Welsh Open in Cardiff. But 147 from the break-off is so rare that its incidence escapes statisticians. In Cardiff, Australian Neil Robertson managed one, his first.

Robertson is perhaps this country's most obscure sporting superstar; and before you scoff, cue sports have put up a case for incorporation into the Paris 2024 Olympics, based on impeccable inclusivity: they have no age or gender divisions.

Robertson was a child prodigy, a Collingwood-mad kid from Melbourne's east who left school at 15 and first tried his luck in the UK at 16, arriving with $500 in his pocket and a borrowed waistcoat. One day he forgot his shoes and had to borrow a pair from an umpire.

Fighting homesickness, he persevered to become No.1 and in 2010 to win the world championship, with mum Alison feeding him Tim Tams between frames. He is now regarded as the most successful player outside England or Ireland. One season, he made 100 century breaks.

He is 37, lives in Cambridge, is chronically tardy, a vegan and a video game addict who misses Australia still. Preceding Cardiff, he had been ill and had practised sparingly. Left-handed with a thatch of luminous blond hair, he is a distinctive figure at the table even before he puts chin to cue.

On 64 this day, Robertson scattered a clump of reds, but all remained within range, and an idea began to form. At 94, he split two reds like an atom, potting one without budging the other. Tableside, opponent Jordan Brown could only watch, cue at first slung over his shoulder, then resting between his knees.

As he stalked the table, Robertson's eyes now burned darkly. "It was just about trusting your technique, keeping yourself composed, and not taking too long on any shot," he said. "I was really happy with the pace I maintained through the break."

At the colours, there was space on the table, clutter in his mind. "It's just about holding yourself together," he said. "I've cleared the colours a million times at practice. You've just got to convince yourself to do it again."

After one tight squeeze on the green, he was home free. He brandished one fist, then both, shook hands with his helpless but unbloodied victim – then dashed.

"I went to the toilet to compose myself," he said, "and people rushed in from the crowd to take selfies!"

Early in the next frame, the balls fell again in an inviting pattern. "Go on, Neil, make another," urged an Australian in the crowd. Robertson resolved to take pink instead of black so as not to kid himself.

"You can get a bit carried away in that situation," he said. "It was definitely on, but I took a blue pretty early in the break to settle myself down and remind myself that I had a job to finish off the match."

He made a break of 140 anyway. The annals are vague, but Robertson is statistically conscious enough to believe that consecutive 140-plusses in a televised event might be unique. The distinction will endure, but the $30,000 bonus will be shared with Thai Noppon Saengkham, who made a 147 break the next day.

In snooker’s glam-grit world, there are no guarantees. At last year’s Welsh Open, Robertson made three century breaks, but lost anyway. Overnight, he was still in this year’s running, but with feet flat on the ground.

"It’s pretty much impossible to replicate what I did," he said, "so I just have to take it however the balls present themselves."