Brisbane bounced back from their  upset loss to Manly last week to beat the Roosters 28-22 in a spiteful encounter that saw both teams end the game with a man in the sin bin. 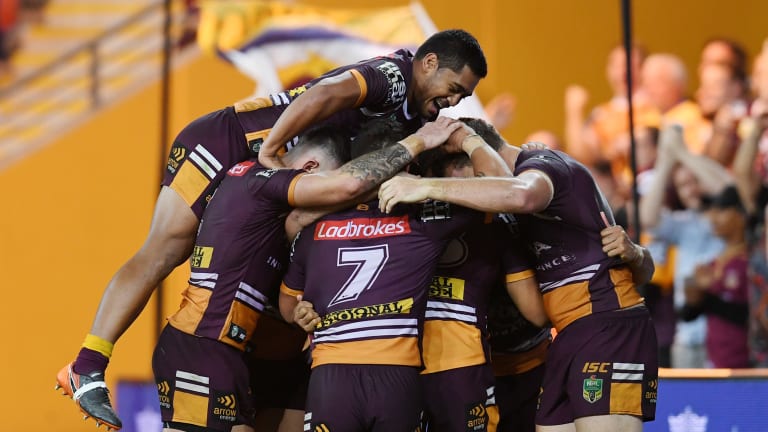 Flying high: The Broncos celebrate a try in their win over the Roosters last night.

The Broncos trailed late before brilliant solo tries from James Roberts and Jamayne Isaako turned the game on its head.

"James did what only James can do, that’s why he’s here," said coach Wayne Bennett after the game.

After last week's disasterous loss, Bennett said he was "elated" with the result  and praised his side's "refusal to be beaten".

"It’s been a tough couple of weeks," he admitted.

"It was an outstanding effort. I couldn’t be more proud of them."

Roberts, who had battled opposite man Latrell Mitchell all night, levelled things up with a trademark burst of speed, then  an aborted field goal attempt led to Isaako grabbing the winner two minutes from time after Dylan Napa had been sin-binned for leading with the head in a tackle on Korbin Sims.

Bennett was reluctant to discuss the issue beyond stating that "it wasn't a great look".

“It’s unfortunate but it’s not a penalty and it’s not a sin-bin. It was a horrible call.

"They’ve just got it wrong.”

Named on the bench, teenage debutant Kotoni Staggs didn't have to wait long to take the field, thrust into the line-up after just two and a half minutes when centre Tom Opacic copped an accidental knee to the head while tackling Blake Ferguson.

Moments later, the 19-year-old had his first assist, putting Corey Oates over for the opening try with a nice catch and pass after a trademark Broncos sweep play involvingAnthony Milford and Darius Boyd.

In a  fiery first 20 minutes,  NSW hopefuls Mitchell and Roberts come together in a brief melee before the Roosters young gun torched his rival one-on-one and fed Joseph Manu, who broke down the wing before finding Luke Keary in support.

The dream debut continued for Staggs  as he swung the scoreboard back in  the Broncos' favour with ten minutes to go in the first half after a super run and offload from Tevita Pangai Jr.

The lead only lasted three minutes, and once again it was Mitchell getting the better of Roberts,  who sold Isaako a dummy before breaking out of the tackle of Roberts and feeding Keary for a double.

Roberts then copped an accidental knee to the groin from Jared Waerea-Hargreaves just before half-time.

Two minutes after the interval Waerea-Hargreaves was on report for a late hit on Anthony Milford. Isaako had a penalty goal attempt from 42m out that hit the post.

He didn't have to wait long to atone for his miss, crossing untouched after a James Tedesco error gave the hosts a scrum. From there, Roberts got one back on Mitchell, jinking past him before giving it on a plate to his winger.

Some soft defence in the middle then swung the game.  Isaac Liu bulldozed Andrew McCullough one-on-one before planting the ball down.

Jaydn Su'A's dropped ball gifted the Roosters possession before Keary dabbed a grubber perfectly into the path of Boyd Cordner to extend the lead, which remained at six points  after Mitchell's relatively easy conversion struck the post.

That miss  proved crucial, and in a night of back and forth, it was Roberts who landed the knockout blow, zooming around Mitchell before turning upfield, brushing past Tedesco and touching down for a stunning solo try.

If that was a metaphorical knockout blow, Dylan Napa then landed a literal one, charging out of the line and appearing to lead with his head, splitting Sims' head open in the process.

Napa was put in the sin-bin and placed on report for the incident.

Cronk nearly stole the win with three to go but his pass to Ryan Matterson in support went to ground.

That error gave Brisbane great field position, and with two minutes to go it was Isaako who  decided the contest. He thought better of a field goal attempt and instead dummied, beat four tackle attempts and scored.

The Roosters regathered   a short kick-off  and Pangai Jr. was sent to the bin on the last play of the game for a professional foul, kicking the ball away as the Roosters attempted one final play-the-ball.