MELBOURNE, Australia — A veteran right-hander with an all-court game and a one-handed backhand, the hands-down greatest player of his era, was trying to dodge an upset in a fourth-round match of a Grand Slam tournament against a former junior world No. 1 with long hair, a flowing one-handed backhand and no fear.

In their first official head-to-head meeting, Pete Sampras, then 29, could not hold off a 19-year-old Roger Federer, who won in five sets at Wimbledon in 2001.

On Sunday night at the Australian Open, Federer, the two-time defending champion, was the one looking across the net at a younger, fresher, more fearless version of himself. And like Sampras 18 years earlier, Federer had no answer for his fourth-round opponent, Stefanos Tsitsipas, a former junior world No. 1 from Greece who sent him packing with a 6-7 (11), 7-6 (3), 7-5, 7-6
(5) defeat in their first official head-to-head meeting.

Federer was the 15th seed in 2001 when he beat Sampras, the top seed and a seven-time Wimbledon champion. Tsitsipas, 20, is the 14th seed and the youngest player remaining in the men’s draw. With the victory, Tsitsipas foiled the 37-year-old Federer’s bid to become the oldest man to reach the quarterfinals here since the 43-year-old Ken Rosewall in 1977.

“I lost to a better player who was playing very well tonight,” said the third-seeded Federer, a 20-time Grand Slam champion, including six titles in Australia. “He hung in there, gave himself chances at some point, stayed calm. It’s not always easy, especially for younger guys. Credit to him for taking care of that.”

The match lasted 3 hours 45 minutes, but Federer essentially cinched his fate two hours in, after he squandered eight break points, including three on unforced errors, to give Tsitsipas enough of an opening to squeeze past him in the second set.

“It definitely didn’t go the way I was hoping on the break points,” said Federer, who kept searching for a weakness to exploit only to see his strengths reflected back at him.

Tsitsipas looked eminently comfortable at the net and he matched Federer winner for winner on the forehand side, with 15.

“He did a nice job of taking care of his half volleys,” Federer said. “That’s maybe what won him the match tonight, I’m not sure.”

Perhaps pride kept Federer from equivocating. The difference in the match was Tsitsipas’s youthful energy, which he oozed with his every Tigger-like step. Federer simply couldn’t match it from the first point to the last, a backhand that he netted.

Federer wasted no time after the match completing his media responsibilities, leaving the clear impression that he couldn’t put this loss in his rearview mirror fast enough. His eyes grew glassy as his news conference wore on, as if his feelings about the loss had traveled from his mouth to his marrow.

“I have massive regrets, you know, tonight,” said Federer, who also announced he intended to play some events on clay this spring after skipping clay-court season the past two years. “I might not look the part, but I am. I felt like I have to win the second set. I don’t care how I do it, but I have to do it.” 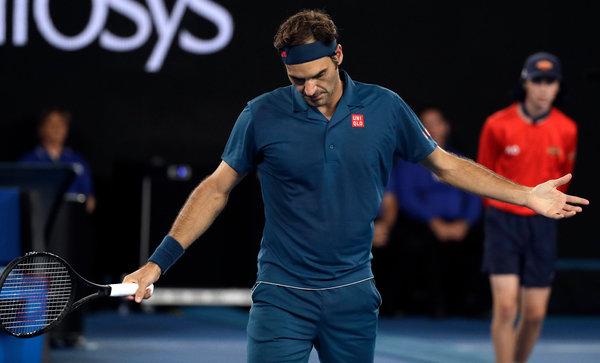 Tsitsipas, who trains at the academy of Patrick Mouratoglou, whose best-known pupil is the 23-time major winner Serena Williams, was proud of the mental toughness he showed in fending off a dozen break points in all.

“I could have cracked at any moment,” he said, “but I didn’t because I really wanted it bad.”

Tsitsipas said he believed from the first point that he could pull off the upset and described the victory as “a beginning of something really big.”

Tsitsipas broke onto the scene last year by reaching the final of the Rogers Cup in Toronto in August, defeating four top-10 players, including Novak Djokovic, on the way.

Tsitsipas is in the quarterfinals of a major for the first time. He will face 22d-seeded Roberto Bautista Agut, 30, who will also be playing his first Grand Slam quarterfinal.

John McEnroe, a seven-time Grand Slam winner, conducted the post-match, on-court interview with Tsitsipas and described his victory as a changing of the guard.

“I’ve heard that story the last 10 years,” Federer said. “From that standpoint, nothing new.”

He had a point. Consider Grigor Dimitrov, now 27, who made it to the quarterfinals here in 2014. He lost Sunday to Frances Tiafoe and is 0 for 34 in majors.

Before Dimitrov, there was Jo-Wilfried Tsonga, now 33, who lost to Novak Djokovic in the 2008 final here and hasn’t advanced to another Grand Slam final.

Even a player like Andy Murray, whose sterling career included major titles and wins over Federer, fell short of Federer’s gold standard.

So, yes, the torch has been passed, only to get extinguished. But there was a hint of resignation in Federer’s voice and a slump in his shoulders during his news conference that belied the breeziness of his rebuttal to McEnroe’s observation.

“About Stefanos, I think he’s definitely done a really nice job now the last year and a half,” Federer said, adding, “I see him definitely being high up in the game for a long time. This was a good night for him tonight.”

After Sampras lost to Federer at Wimbledon, he won one more major, the 2002 United States Open, then retired. How many more chances will Federer get to grow his legacy?

Federer looked irked when he was asked if he could see a bit of himself in Tsitsipas, the son of two tennis coaches, who has described Federer as his childhood idol.

“He has a one-handed backhand and I used to have long hair, too,” Federer said. “Yeah, so maybe a little bit, sure.”

Want more Australia coverage and discussion? Sign up for the weekly Australia Letter, start your day with your local Morning Briefing and join us in our Facebook group.