MIAMI GARDENS, Fla. — No matter how smooth and imperious Roger Federer looked in the Miami Open final, whipping winners seemingly on demand and breaking big John Isner’s serve on four occasions, Federer knows all too well how fragile this all is as the shadows lengthen.

There can be no doubt that Federer is back near top gear at 37. He is moving like a man 10 years younger and has a sparkling 18-2 record this season. After his 6-1, 6-4 victory on Sunday, he is the first man or woman to win more than one singles title in 2019.

“Kind of fitting,” Isner said of Federer ending that unprecedented streak of 33 different singles champions. “One of our game’s greats.”

Perhaps the greatest, though it remains so tough to compare apples to apples and Federers to Lavers. Comparing eras is seemingly as foolish an errand as writing definitive lists until Rafael Nadal and Novak Djokovic are all done winning, too.

But Federer’s enduring excellence is an evermore elegant and persuasive argument, even if the reminders of how challenging it is for tennis champions to endure and prosper were right there in front of him again on Sunday.

There was his opponent, the defending champion Isner, 33, suddenly hobbling between points in the second set with a left foot injury that Isner fears could be a stress fracture.

“I have never had anything like this before,” said Isner, who began feeling the pain late in the first set.

And when it very soon came time for Federer to accept his fourth Miami Open singles trophy, one of the officials whose hands he shook was the tournament director James Blake, one of his former tour rivals who is now 39 and long retired.

“Roger, I don’t know what else to say,” Blake said after Federer’s 101st tour singles title. “It just makes me feel like such an underachiever.”

Nearly all the stars of Federer’s tennis generation have moved on to other roles: Tommy Haas, one of Federer’s closer friends, is now the tournament director at Indian Wells.

Federer made his debut in Miami in 1999 and is the only man who participated that year who is still playing singles.

“It’s been a superlong journey for me here,” Federer said. “I got a wild card here in ’99 and made my first final here in 2002 against Andre Agassi.”

That could have been his last hurrah, but the hurrahs keep coming with titles at Dubai and Miami in 2019 and a very close call at Indian Wells, where he was beaten in three tight sets by Dominic Thiem in the final. 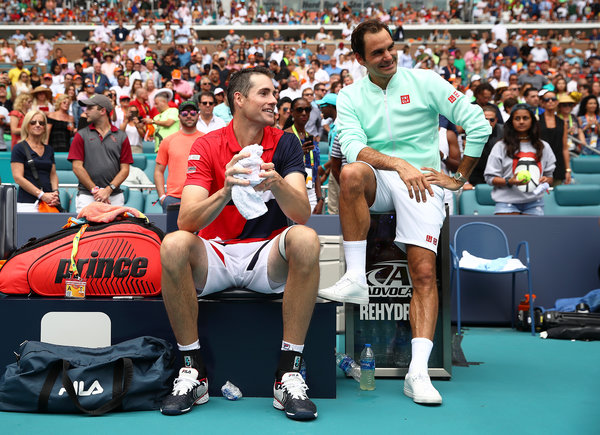 But Federer bounced back convincingly in a familiar tournament in an unfamiliar place: Hard Rock Stadium, the Open’s new, much more capacious home after 31 years in the more intimate, boutique setting of Key Biscayne.

In 2018, when the event was still on an island instead of in an N.F.L. stadium, Federer lost in his opening round to Thanasi Kokkinakis. Though Federer had another scare in the same round this year against the qualifier Radu Albot, he rallied to win in three sets and then gathered nothing but momentum, winning five straight matches in straight sets.

“It’s easy just to say, ‘Well last year didn’t work out, so I won’t come back this year, and as I’m playing the clay, maybe add rather another clay-court event,’ ” Federer said. “But I felt like let’s extend the hardcourt season. Let’s see the new venue. To be honest, I think that was something also I was excited to see. I did feel like the game was there last year, and I thought also the game was definitely here this year even after the Australian Open. So I’m happy with the team, we took the right decision.”

The team has also agreed that Federer will play on clay for the first time since brief, unfulfilling visits to Monte Carlo and Rome in 2016. His next tournament: Madrid in early May, which will give him time to reboot and reacquaint himself with the game’s grittiest surface.

How confident is he?

“Not very confident,” he said. “I don’t even remember how to slide anymore. You know, I’m taking baby steps at this point.”

It is smart, as ever, to try to underpromise and overdeliver, particularly when you are entering the kingdom of Nadal, the 11-time French Open champion and most successful men’s clay-court player in history.

But Federer, despite his fourth-round loss to Stefanos Tsitsipas at the Australian Open, has certainly had another hardcourt run to savor in 2019.

He looked thoroughly in his element on Sunday, just as Isner feared and expected he would.

“I knew he was going to play well today; I knew he was seeing the ball very big,” Isner said. “Certainly that was the case. I wasn’t up to the task in the first set, that’s for sure.”

Before the final, Federer compared the experience of facing Isner’s serve to that of a soccer goalkeeper facing a penalty kick.

If you embrace that metaphor, he made a very quick save, breaking Isner in the opening game, blunting the power with sliced returns on the stretch and then hooking passing shots that even the 6-foot-10 Isner struggled to reach.

Federer rolled through his own service games in a hurry. He won all 20 of his first-serve points in the match and dropped only three points on his second serve.

Isner, who had not faced Federer in an official match since 2015, would have needed to be very near the top of his game to stop this train or even get into one of his beloved tiebreakers.

But he was far from his peak and eventually in great discomfort, limping down the stretch after an injury timeout late in the second set and later wincing and limping off the dais in the interview room.

“You hope it’s nothing serious, and I hope he’s fine,” said Federer, who said experience helped him remain focused as Isner struggled. “But it’s tricky, no doubt.”

Tricky indeed to remain hale and hearty year after year in a Darwinian individual sport; even trickier to keep holding up trophies year after year with younger men swinging full force across the net.