Scottish champions Celtic's hopes of progressing in the Champions League were in the balance after they were held to a 1-1 draw at home by 10-man AEK Athens in their third qualifying round first leg.

Socceroos playmaker Tom Rogic started and played 64 minutes but ultimately Brendan Rodgers will be disappointed his side were unable to take a lead into next week's second leg. 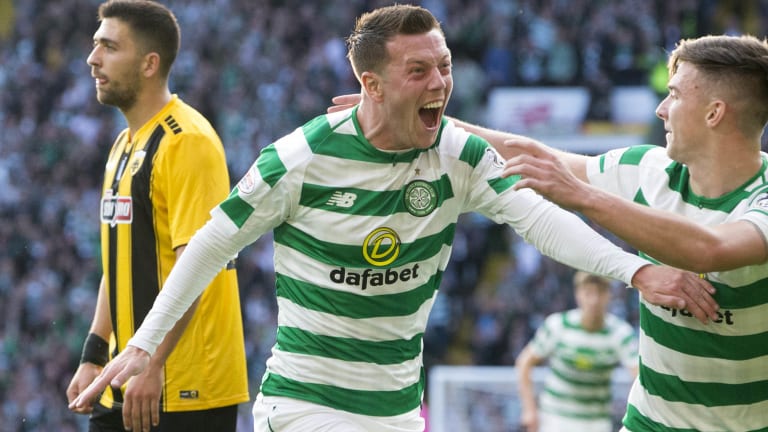 Stalemate: Callum McGregor celebrates scoring before Celtic were pegged back.

The Greek side had midfielder Kostas Galanopoulos sent off in the 57th minute for a second yellow but The Hoops were unable to capitalise on the numerical advantage.

Callum McGregor had fired Celtic in front in the 17th minute with a well-struck effort on the turn from a tight angle but AEK drew level a minute before the break through Viktor Klonaridis.

After losing Galanopoulos, who seven minutes after being booked picked up a second yellow, AEK sat deep and defended and were able to frustrate Celtic.

The winners of the tie will face either Sweden's Malmo or Hungarian team Vidi in the play-off round with a place in the group stage up for grabs.

PAOK, Greece's other Champions League hopefuls, fought back from two goals down to beat Spartak Moscow 3-2 in a thrilling game.

Goals from Ivelin Popov and Dutch winger Quincy Promes put visitors Spartak 2-0 up inside 17 minutes but the hosts responded quickly.

A penalty converted by Aleksander Prijovic got PAOK back in the game in the 29th minute and goals for Dimitris Limnios and Dimitris Pelkas put the home side 3-2 up by the break.

Spartak had a great chance to level after the break but Promes's 71st-minute penalty was saved by PAOK keeper Alexandros Paschalakis.

The winners will play Portugal's Benfica or Turkey's Fenerbahce in the play-off round for a place in the group stage.

Should they complete the job in the second leg, Salzburg will face Red Star Belgrade or Spartak Trnava in the play-off round.