Rory McIlroy Is Poised to Grab a Career Grand Slam

Rory McIlroy went for the bold play, even if it turned out a little off line.

Asked how he had dealt with four unfulfilled attempts to complete golf’s career Grand Slam, McIlroy offered a historical reference as perspective.

“I guess I’ve become a lot more comfortable with the fact that I’m going to fail more times than I succeed at that certain conquest,” he said, pointing out that Abraham Lincoln even lost some elections. “He wound up being the president of the United States,” McIlroy said. “So I’ve still got a bit of time.”

McIlroy knows the select fraternity he would join if he added a Masters to the titles he already won at the United States Open, British Open and P.G.A. Championship. The full set of majors has been captured by only five men, including Jack Nicklaus and Tiger Woods.

Also this year, Jordan Spieth can achieve a career Grand Slam at next month’s P.G.A. Championship and Phil Mickelson can at the United States Open in June. But it’s McIlroy who is up first at Augusta National Golf Club in Georgia.

“I know exactly the people I would be putting myself alongside,” he said. “It would be huge. But again, I can’t think about it that way.”

He has lately been on a roll. Even for someone who seems to have plenty of time (McIlroy is 29), the momentum he brings into this year’s first major doesn’t come around often.

Last month’s one-stroke victory at the Players Championship capped a run of six starts to open 2019 in which he finished no lower than sixth. He also reached the round of 16 at the WGC Match Play in March, eliminated on the 17th hole of a tense battle with Woods.

“Right now it’s all Rory McIlroy,” said Paul Azinger, NBC’s lead golf analyst. “He’s in contention every week. We’ve criticized him whenever he didn’t win, then he goes ahead and wins the biggest event on the PGA Tour.” 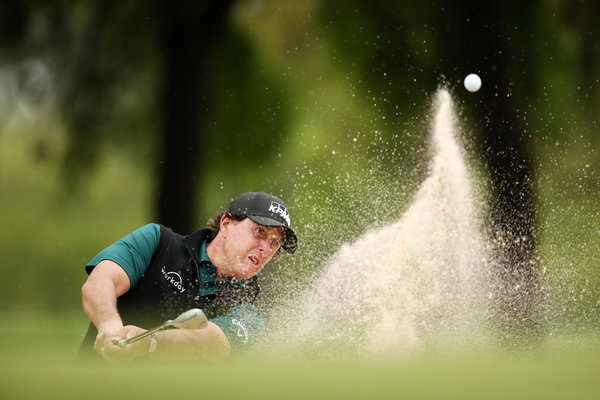 “You just get the feeling that it’s going to be a big Rory year.”

Though McIlroy is No. 3 in the world rankings, behind Dustin Johnson and Justin Rose, no one has accumulated more ranking points since the calendar turned.

“When his mind’s right and he’s putting good,” said Jason Day, who will also play at the Masters, , “I think he’s explosive.”

McIlroy has shown an ability to pile up wins in bunches. He collected 14 of them worldwide from 2012 through 2015, including three of his four major championships. He was second on 12 other occasions during that span.

That said, McIlroy’s current success has been marked by a different demeanor and he is calm as he considers the big picture. Tournament results can vary, but performance is the yardstick.

“You’re not going to get frustrated playing good golf,” he said.

Even with a green jacket — and a permanent entry in golf history — at stake?

“There’s a difference between a personal desire and a need,” McIlroy said. “I would have said a couple of years ago, ‘I need to win a Masters. I need a green jacket’. Now it’s, ‘I want to win it. I’d love to win it. But if I don’t, I’m O.K.’ And I think that is the difference.”

Success by McIlroy, Spieth or Mickelson would elevate them to a stratosphere occupied only by Gene Sarazen, Ben Hogan, Gary Player, Nicklaus and Woods.

“When I first came out, I just wanted to win any major,” Mickelson said at last year’s U.S. Open. “Any major would have been great. Now that I’ve won the other three majors, it’s U.S. Open specific. I would love to win this one to win all four. That’s certainly a goal and nothing I’m shying away from.”

McIlroy said it would be great if all three golfers achieved the Grand Slam.

“How good would it be this year if Jordan won the P.G.A. and Phil won the U.S. Open and I won Augusta?” McIlroy said. “Golf would be right in the center of all sports stories if that were to happen.”

Not only is McIlroy leading off the quest, he’s also widely considered by analysts to have the best chance of breaking through.

“If I was a betting man, I would bet that he gets it,” said Jim Mackay, now an NBC analyst after two decades as Mickelson’s caddie.

A couple of years ago, such expectations might have affected McIlroy. This is his fifth trip to Augusta in which the Masters has beckoned as the lone missing piece from his major collection.

Each of his previous four Masters had left McIlroy exactly six strokes behind the winner. His final position has ranged from fourth to a share of 10th, but the six-shot gap has been unyielding.

His closest call came last year, only to wind up the most disappointing. Trailing Patrick Reed by three and playing alongside him in the final pairing, McIlroy cut into the deficit on the first hole and faced a short eagle putt at No. 2 that could have drawn him even.

McIlroy missed, tumbled to a closing 74 and wound up with a share of fifth.

“That’s when you really have to preach patience,” McIlroy said. “You know the golf is in there; it’s just letting that golf come out when it matters most. I need to almost take my foot off the gas and just let it happen. And that’s obviously easier said than done.”

Then again, he needs only to look at the past few months to see how the process can pay dividends.

Though he was unable to clinch first against Xander Schauffele’s charge at Kapalua in January, against Johnson in Mexico in February or in his own lack of birdie chances in March on the final day at Bay Hill in Florida, McIlroy latched onto positives.

Then when victory finally arrived at the Players, his reaction, a weak fist pump, was subdued.

“It’s been having a focus over the last six of seven months on my attitude, especially my attitude to golf,” said McIlroy, who married shortly after the 2017 Masters. “Not letting golf define who I am as a person, trying to keep the two things very separate.”

It’s a mind-set some players don’t attain until long after they’re 29. For now, it seems to have freed McIlroy to play the most consistent golf of his career. It may yield a green jacket, but if it doesn’t, he’s prepared to deal with it.

“At the end of the day, all you’re trying to do is get that ball in the hole,” he said. “If you feel like you’re doing that pretty well, then what’s there to be frustrated about?”