The text message from his assistant coach Rex Kalamian popped up on Doc Rivers’s phone on an off night last week, but it contained no pressing strategic suggestions for the Los Angeles Clippers’ next game. No injury updates or juicy trade rumors, either.

Kalamian simply felt an urgency to let Rivers know that it had happened again — another burst of the scoreboard overload that has dominated this 2018-19 N.B.A. season even more than the star-laden Golden State Warriors.

A laughing Rivers recounted how Kalamian’s summary pointed out that nearly every winner that night (Jan. 14) scored between 131 and 149 points. “It was like five teams up there,” Rivers said.

In truth it was only four — Indiana (131), Atlanta (142), Golden State (142) and Philadelphia (149) — but Rivers’s point was made. A leaguewide push by teams to shoot more 3-pointers and take more shots earlier in the shot clock than ever before, combined with a freedom-of-movement crusade by N.B.A. officials, has resulted in an offensive boom rendering scores in the 140s routine — with few signs of it abating.

The trend has not been met with universal approval. Some of the game’s biggest names, including Gregg Popovich, Charles Barkley and Stan Van Gundy, continue to register concerns that teams are abandoning too many traditional offensive principles in favor of rampantly hoisting 3s.

Top defenders like Golden State’s Draymond Green and Denver’s Paul Millsap have also charged that tighter refereeing has made it harder than ever to counter the offensive wizardry of gifted scorers like Houston’s James Harden, who rumbled for 61 points Wednesday night at Madison Square Garden to cap a five-game streak in which Harden averaged a colossal 52.2 points.

The reviews, though, have generally been more positive than negative. The N.B.A.’s 30 teams are averaging 110.5 points per game collectively (up from 106.3 last season), the highest rate since 1984-85, when it was a 23-team league that wasn’t nearly as sophisticated in its defensive concepts and scouting techniques.

Said Millsap, who made four All-Star appearances in Atlanta before joining the Nuggets in July 2017: “You can’t really touch guys now. So the fouls are up, 3-point shooting is definitely up. And the scoring’s up.”

Millsap, though, is not convinced those things are necessarily worrisome. 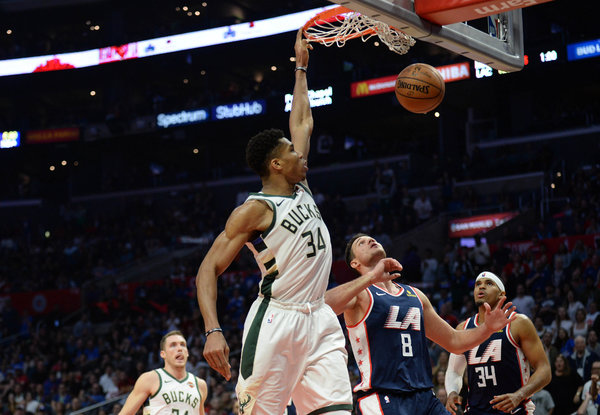 As recently as three seasons ago, in 2015-16, teams managed to crack the 140-point barrier only five times. That number rose to 13 last season. This season it has already happened 28 times entering Friday’s play, which coincides with the league average for 3-point attempts per game crossing the 30 threshold for the first time in league history at 31.3.

The league office, however, insists that inflating scores further was not the aim when it announced that existing rules would be enforced with greater frequency this season. The rules in question forbid players to “hold, push, charge into, impede the progress of an opponent,” or take any other measures that could be interpreted as causing the player guarded to be “rerouted.”

Kiki VanDeWeghe, the N.B.A.’s executive vice president of basketball operations, said the push to enforce such violations with more vigilance stemmed from longstanding team complaints about physicality away from the ball and in the post in an era when more and more coaches have favored switching defenses that call for defenders to pass players off to a nearby teammate instead of trying to fight through screens.

“Those rules were always there,” VanDeWeghe said.

The freedom-of-movement movement gained particular steam last summer when coaches like Boston’s Brad Stevens and Utah’s Quin Snyder led the lobbying against the proliferation of switching defenses creating too many opportunities, in VanDeWeghe’s words, for “holding and grabbing and physical play off the ball.”

Yet that’s just one element of a cocktail that has changed the offensive equation as wildly as the N.B.A. witnessed in the 2004-5 season, when the pairing of Steve Nash and Coach Mike D’Antoni’s famed “Seven Seconds Or Less” offense — abetted by the league’s crackdown on hand-checking — began to revolutionize offensive philosophy. That shift was among the factors that helped transform Nash from a mere All-Star point guard to a two-time winner of the Most Valuable Player Award.

The Warriors, led by their “Splash Brothers” backcourt of Stephen Curry and Klay Thompson, then took D’Antoni’s freewheeling approach to a new level in their first championship season in 2014-15 by averaging 27.0 3-pointers and a league-high 98.3 possessions per 48 minutes.

The Rockets, now coached by D’Antoni, have since made Golden State look comparatively restrained, averaging 42.3 3-point shots per game last season and 44.4 per game this season. Houston’s devotion to 3-pointers and layups — and preferably nothing in between at the behest of their analytics-obsessed general manager Daryl Morey — is such that Harden and Co. are attempting more 3-pointers than 2-pointers as a team for the second consecutive season.

“My first year here, we were No. 1 in the league in pace and it felt like we were running past everybody every night,” Golden State Coach Steve Kerr said. “This year I think we’re playing even faster than we did in 2014-15, but we’re middle of the pack. The whole league has shifted in terms of priority and style.”

VanDeWeghe remains convinced that, when the Competition Committee reconvenes next month during All-Star Weekend in Charlotte to assess how the game is being played and officiated, there will be more praise than grumbles.

“I still remain the complaint department,” VanDeWeghe said. “But most of the feedback I get is, ‘The game looks better.’ ”

Kerr is among the frequent objectors despite the fact his team seemingly benefits as much as any from a free-flowing game. He contends offensive players are not punished enough on traveling calls and when pushing off on drives to the basket, which fuels Kerr’s contention that it has “never been more difficult to guard in the N.B.A. than it is right now.”

“I’d like to see a balance where the rules are still geared toward these high scores, because I think a lot of people enjoy that, but you’ve got to give the defense a chance,” Kerr said. “We’re giving so much of an advantage to the offensive player.”

Proponents of the 3-pointer laud its comeback potency, in terms of wiping out big deficits quickly, but there’s no dodging the fact that there have been 35 games already this season decided by 30 points or more — compared to just 40 total last season and a record 49 in 2016-17.

“I think a lot of people, maybe in the N.B.A. office and some of the media, just equate scoring with excitement,” said Stan Van Gundy, the ESPN analyst and former Miami, Orlando and Detroit coach, on a recent NBC Sports “Habershow” podcast. “Close, competitive games, regardless of style of play, are always exciting.

“I think we’re headed in the wrong direction. We’re O.K. right now. Where are we going to be in five years? Is everybody going to shoot 50 or 60 3s a game?”

There has been no louder critic of direction offenses are trending than Popovich, who routinely uses the word “boring” to describe the proliferation of shots behind the 3-point line. San Antonio’s 24.3 3-point attempts per game, which ranked last in the league, would have ranked No. 2 as recently as the 2011-12 season.

“Everybody penetrates to shoot 3s, so the artfulness of the game is sort of getting lost,” Popovich said last week. “And everybody does the same thing because the analytics drives it, where shooting these 3s seems to be the smart thing to do.

“So you end a game and the first stat you look at is if one team shot 3s well and the other one didn’t. Game over — you don’t have to look at rebounds, turnovers, anything else. That tells the whole tale. And that’s pretty boring.”

Popovich was then asked if the Spurs’ league-low total of 3-point attempts is by strategic design, in response to the lost “artfulness,” or more a byproduct of San Antonio’s roster, which features two elite midrange scorers in LaMarcus Aldridge and DeMar DeRozan but no point guard adept at getting into the paint and collapsing defenses.

“If we were able to get more 3s,” Popovich admitted grimly, “we would.”