Russia have qualified for the 2019 Rugby World Cup after Romania – who had initially secured the slot – Spain and Belgium were docked points for repeatedly using ineligible players during the qualifying competition, World Rugby said on Tuesday.

After a "remodelling" of the qualification process, Russia emerged top to advance to next year's tournament in Japan. It will be their second appearance following 2011 in New Zealand when they lost all four pool games. 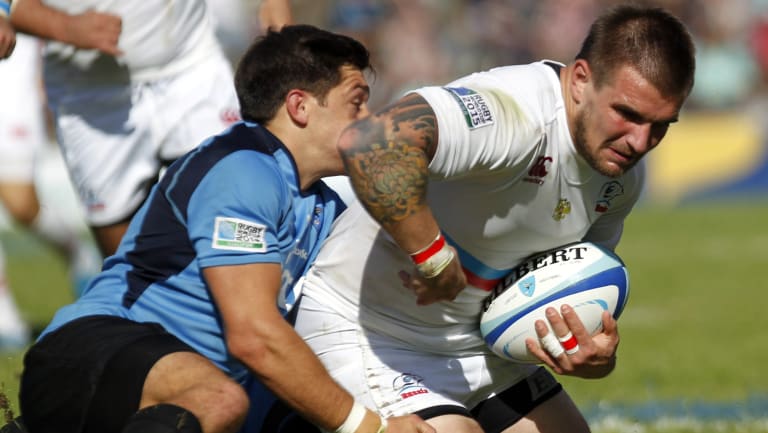 Into the tournament: Victor Gresev of Russia is tackled by Agustín Ormaechea of Uruguay .

Germany, who have never been in a World Cup, now have another chance as they are promoted to face Portugal in a playoff, though the winners face a daunting final step with a two-legged playoff against Samoa.

The winner on aggregate will qualify for Japan 2019 in Pool A, alongside the hosts, Ireland, Scotland and Russia. The loser will still have a chance of progress via the Repechage competition in November.

Tuesday's announcement is the latest twist to a complicated and controversial series of matches as, following an investigation by the independent Judicial and Disputes committee, the three nations were docked five match points for each ineligible player used.

Spain used Mathieu Belie and Bastien Fuster, who have both previously played for France Under-20s, in eight qualification matches, leading to a 40-point deduction and a £50,000 ($90,352) suspended fine.

Romania had only one ineligible player, Sione Faka'osilea, who previously played for Tonga Sevens. They were given a £100,000 ($180,703) suspended fine and their 30 docked points overturned their World Cup qualification.

All the decisions are subject to appeal within 14 days and Tuesday's announcement is unlikely to be the final word.

Spain's initial appeal to replay their match against Belgium, when a Romanian referee was in charge and Spain's shock defeat sent Romania through at their expense, was rejected, despite the sport's governing body supporting it.

"Having considered all the evidence, including submissions from World Rugby, Rugby Europe, Spain and Belgium, the independent committee refused the request made by World Rugby and Spain to set aside the result of the match and determined that the match should not be replayed," the committee said in a statement.

In reference to the entire investigation, the committee added: "Although mistakes were made by Rugby Europe and participating unions, they had not acted in bad faith. The committee also recommended that World Rugby re-emphasise the importance and sanctity of Regulation 8 (eligibility) and any other steps that will prevent a repeat of these circumstances."

The Spanish Rugby Federation said they were very disappointed by the decisions, having sought clearance for Belie and Fuster from their French counterparts, and were considering an appeal.

"It should be recognised that the (eligibility) rule is confusing and World Rugby should have created a procedure and created a system to avoid these type of undesirable situations from happening," the federation said in a statement.

Eligibility for international rugby is a notoriously complicated affair, with countries often nominating their own choice of "capture" level team that ensures a player cannot then switch nationalities.

Recognising this, the independent committee added in its report: "World Rugby might want to consider whether to maintain a database showing players who have been captured by Unions."