Russia's new World Cup hero, Denis Cheryshev, was forced to deny taking banned substances on Saturday after his own father was reported as saying he was injected with "growth hormone" before the tournament.

The Russian Sport Magazine said Dmitri Cheryshev, a manager who was a former international, made the potentially-damaging remarks in an interview while his son was sidelined during the build-up to Russia 2018. 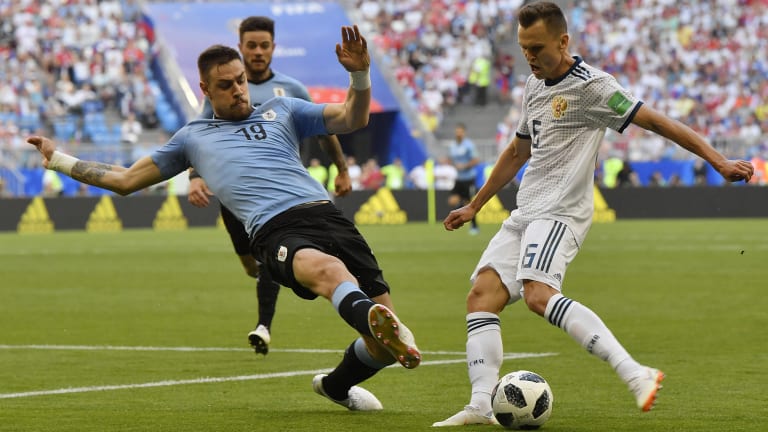 Surprise star: Denis Cheryshev was not expected to shine as he has this World Cup.

Use of growth hormone without a medical exemption is a doping offence punishable with a ban of up to four years and Cheryshev was asked about quotes that appeared in Sport Weekend almost a year earlier.

The 27-year-old, who will carry the hopes of 144 million Russians today against Spain, said: "I don't know where the journalist got this from. Maybe they didn't understand my father. I have never used any prohibited substances."

That was after the deputy director general of of the Russian Anti-Doping Agency, Margarita Pakhnotskaya, told The Sunday Telegraph the organisation would "study carefully" the quotes attributed to his father.

Cheryshev has been the star of his country's shock start, his three goals key to recording the best opening two results of any host nation.

Cheryshev had been a surprise call-up and only got his chance when Alan Dzagoev was forced off in the first half against Saudi Arabia.

Injuries meant he had not played for his country for almost two years when his father was quoted as saying: "He received an injury and, because of the miscommunication of doctors, they began to inject him with growth hormone." He added: "It was done so that Denis recovered more quickly."

Cheryshev snr hung up when telephoned by The Sunday Telegraph on Friday and asked to comment, failing to respond to further attempts to make contact.

The Russian Football Union issued a statement confirming Cheryshev had been given an injection, but not for growth hormone. It said the treatment had been a legal platelet-rich plasma injection, accusing the journalist who interviewed his father of having "incorrectly interpreted his words" and adding: "This is confirmed by the recording of the interview."

Sport Weekend also issued a statement acknowledging that although Cheryshev snr had used the words "growth hormone", it was never intended or understood to mean actual growth hormone.