Ryan Hoffman knows it's unlikely he will have a fairytale NRL farewell, but after 16 years and a decorated career he isn’t complaining.

The 34-year-old Melbourne Storm forward played 20 games this season and despite seriously injuring his hamstring in the final month he fought his way back to fitness in time for the last week of the regular season.

But by that time young forward Joe Stimson had made the starting second-row spot his own while forwards Nelson Asofa-Solomona, Christian Welch and Kenny Bromwich had the bench roles in their hands.

Hoffman will retire after Sunday's game and is so respected he will take on a role under Storm football director Frank Ponissi next year. 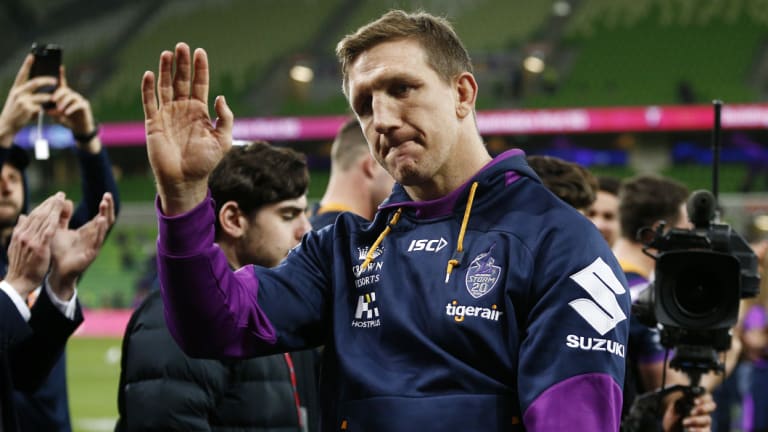 All signs point to Ryan Hoffman missing out on the NRL grand final on Sunday.

He knows he will likely be watching from the sidelines when the Storm run out against Sydney Roosters in the NRL grand final at ANZ Stadium on Sunday night.

“It’s extremely hard but that’s rugby league. That’s footy. You can only have 17 on the footy field,” Hoffman said.

“I’m very disappointed but I can’t do much more than that.”

Storm coach Craig Bellamy has clearly been hurting as he kept Hoffman out of the side for the preliminary final with the veteran forward one of his most-loved players.

Hoffman won’t be smiling much this week but he won’t be bringing down the mood either.

He could have hid in the background but instead he took questions from the media during Storm’s open media day on Monday and signed autographs and posed for pictures with supporters at the open training session.

“It’s great the club has put itself in the position it has, and I’m very happy to be part of the club.

“I’ve worked really hard to get myself back and quite proud that I gave myself the opportunity to come back and be available for selection again.”

Bellamy played at the Canberra Raiders with Hoffman’s dad, Jay, and you won’t see Hoffman burning such a long relationship over missing out on the side, but he does still believe he could hold his own in the grand final side.

“That’s his role to put in what he thinks the best 17 is and we as players accept his decision,” Hoffman said.

“We don’t have to be happy about it but we accept it because we know he is doing the best thing for the club.

“He’s done that every year I’ve been here and that’s why he is such a good coach as he can put emotion aside, put all that aside and pick the team he thinks will do the best thing to get results and that’s what he has done the last 16 years and he has been pretty bloody good at it.”

This week has also confirmed to Hoffman that he has no stomach to ever go into coaching.

“I’m not a coach. I’ve never been more sure of something in my life," Hoffman said.

“I see myself able to add a bit more to the club in the administration side of it.”

While all signs point to Hoffman missing out on the grand final, the Storm tell all their squad members to stay ready, just in case.

“Whilst they are on the fringe, they are probably a lot closer than they think they are, the one incident, one injury or whatever it is that happens gives them an opportunity,” Storm assistant coach Jason Ryles said.

“That’s why you stay hungry and work hard.”

Hoffman has one more week left in his playing career and he will go out as a professional, whether he is on field or not.

The Storm play Sydney Roosters in the NRL grand final at ANZ Stadium on Sunday at 7.20pm.