Lewis has been on holiday and removed from all the drama surrounding his old club, which has seen Flanagan banned from coaching the Sharks indefinitely after salary-cap investigations uncovered he'd been in constant contact with the club during his suspension in 2014. 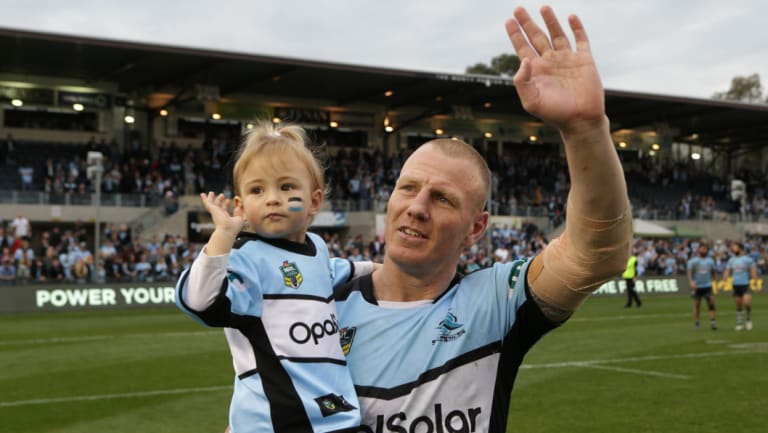 Flanagan was meant to stay at arms distance that season as he served a one-year ban due to the peptide saga.

But when Sharks chief executive Barry Russell self reported for potential salary cap breaches, it inadvertently led to the NRL uncovering more than 50 emails between Flanagan and the club during his ban.

Lewis has been enjoying the first few months since retiring at the end of the 2018 season and was on holiday with his family when he spoke to The Canberra Times about his book Cool Hand Luke Lewis The Autobiography.

It meant he didn't know the ins and outs of the Flanagan saga, but didn't think it would take the shine off Cronulla's historic first premiership.

Flanagan has until the end of January to respond after being deregistered indefinitely.

"I don't think so … I don't think it's going to tarnish the 2016 grand final or anything like that," Lewis said.

Stuart coached Lewis and NSW for the 2011-12 State of Origin series, with Lewis crediting Stuart as in infleunce on his career.

A career that spanned 324 NRL games, 17 Origins and 16 Tests for Australia.

"He got me into Origin again … he's just one of those blokes you like to surround yourself with," Lewis said.

"He knows football inside and out and he's got a really good sense of the game. He ticks all the boxes on my end – he's achieved everything as a coach and a player.

"He put so much trust back into me and gave me the opportunity to wear the Blues jersey and made sure I performed.

"He always got you up for a game. He definitely had a big influence on me."

Lewis had thyroid cancer removed from his neck during the 2012 season, after his neck pulled up sore following a game against the Wests Tigers.

He had two bouts of surgery, but was never really worried about it.

"It was a funny period, but the way I treated it was in and out," Lewis said.

"To me it happened very quickly and that's how I treated it – just go in and do what I've got to do.

"For me it went fairly quickly, but for the family  it seemed to drag along for a long time."

Despite all the reminiscing, Lewis hasn't regretted his decision to call it a day, admitting he'd lost the love of training.

He's loving retirement and was looking forward to getting stuck into the next phase of his career in the New Year.

Throughout his career, Lewis loved everything about rugby league – not just the playing, but the training as well.

The 35-year-old said that was no longer the case.

"I've done the right thing to be honest. I feel good about, I go to bed at night with my body not aching any more," he said.

"I always prided myself on training, I loved training, but I was turning up to training during the year and I just wasn't enjoying it.

"I think I'd fallen out of love with rugby league training."