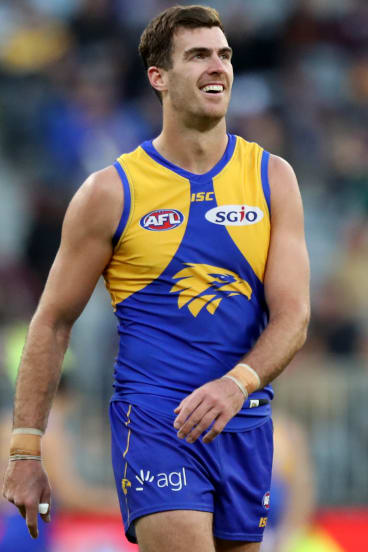 The Saints, who also are making a strong bid to acquire Sydney star Dan Hannebery on a four-year deal with a trigger, are understood to have made Lycett a substantial, long-term offer.

Lycett, who turns 26 in September, also has a strong contract offer on the table from the Eagles, his currency having risen following the second knee reconstruction to West Coast’s superstar ruckman Nic Naitanui, who will miss most of 2019.

Lycett is also being courted by Port Adelaide, whose primary ruckman Patrick Ryder has been troubled by an achilles injury. Lycett, who hails from South Australia and played for Port Adelaide in the SANFL, is a restricted free agent.

Lycett’s ability to play as a forward, in concert with his ruckwork, is part of the appeal for the Saints and Power. While he is a South Australian, St Kilda can offer him the certainty of being their first-choice ruckman.

As a restricted free agent, the Eagles have the right to match the deal and can force a trade if they are not happy with the potential compensation. West Coast are also fighting hard to retain gun midfielder Andrew Gaff, who has been offered massive $1 million-plus deals from Victorian clubs and will make a decision on his future during his season-ending suspension.

St Kilda has used a mixture of Tom Hickey and Billy Longer as their main rucks since 2017, with neither of that pair locking down the position. Longer is out of contract at season’s end, while Hickey is contracted for next year.

West Coast managed to retain their third high-value free agent, all-Australian tall defender Andrew McGovern, on a multimillion-dollar five-year deal. That Lycett is a restricted, rather than unrestricted, free agent means he is among the top 25 per cent for payments at West Coast in 2018.

The strong St Kilda bid for Lycett underscores the Saints’ aggression, comparable to North Melbourne’s, in the player market this year. The Saints, like North, are bidders for Gaff and for Port’s Jared Polec. North is viewed as the frontrunner should Polec leave the Power, who will find it difficult to match the long-term offer – believed to be five years – from North.

The Saints have significant room in their salary cap. Unlike Hannebery, who is contracted, they can sign Lycett without giving up anything in a trade — unless West Coast is willing to match the offer, or can force a trade by threatening to do so, as the Crows did with Patrick Dangerfield when he crossed to Geelong in 2015.

Port’s interest in Lycett stems from concern about Ryder’s body and the club’s reluctance to use either Charlie Dixon or Justin Westhoff in the ruck. The Power’s teenage ruck Sam Hayes is recovering a knee reconstruction.

The Saints have been more assertive in the player market following the arrival of Simon Lethlean, the former AFL senior executive, as the head of football. Lethlean has since hired former Crow James Gallagher as the club’s new list manager prior to what shapes as an eventful trading and free agency/draft period.