Saints midfielder to miss a month

St Kilda have been dealt another injury blow with midfielder Blake Acres set to miss a month of football with groin soreness.

Acres, 22, was rested from the Saints' loss to Melbourne a fortnight ago, and returned to take on Fremantle in Perth last Saturday night, picking up 23 disposals.

However the West Australian has continued to experience discomfort with St Kilda deciding the best course of action was to give him an extended spell, beginning with Saturday night's date with Collingwood at Etihad Stadium. 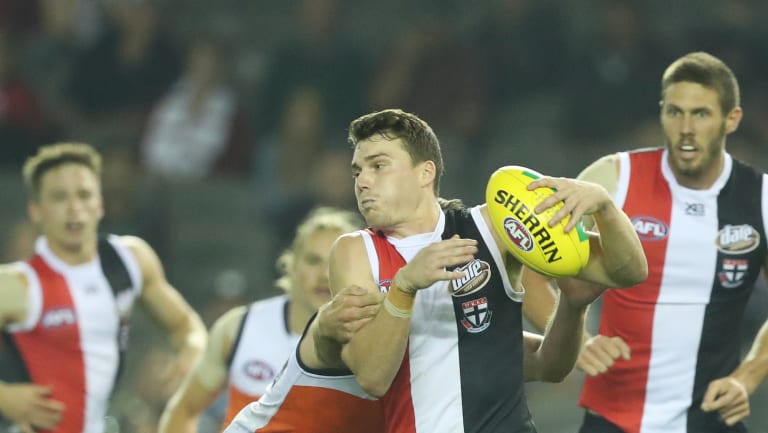 Blake Acres of the Saints looks to handball.

It is a further setback for the Saints, who have just one win and a draw from their first eight games this season.

Defender Dylan Roberton's season is over following his much-publicised collapse against Geelong in round four from a heart condition. Youngster Ben Long is at least two months away from returning after fracturing the metatarsal in his right foot. Paddy McCartin will miss a second straight game with concussion, while midfielder Koby Stevens is out indefinitely with his own concussion problem.

The Saints announced earlier on Thursday that father-son selection Bailey Rice, the son of former Saint and Blue Dean Rice, would make his debut against the Pies.

Taken at pick 19 in the 2013 draft, the tall and versatile Acres has played 51 games for the Saints, averaging more than 23 disposals per game this season.