St Kilda have accepted the umpire’s controversial decision not to award Jake Carlisle a free kick in the last contest of the game with the 26-year-old Saint rueing the fact he didn’t hold on to the mark.

A disappointed St Kilda coach Alan Richardson said he initially thought it should have been a free kick but was satisfied when football manager Simon Lethlean told him it was probably a fair decision.

Giants skipper Phil Davis appeared to catch Carlisle high when attempting to spoil the mark although the field umpire was unsighted. 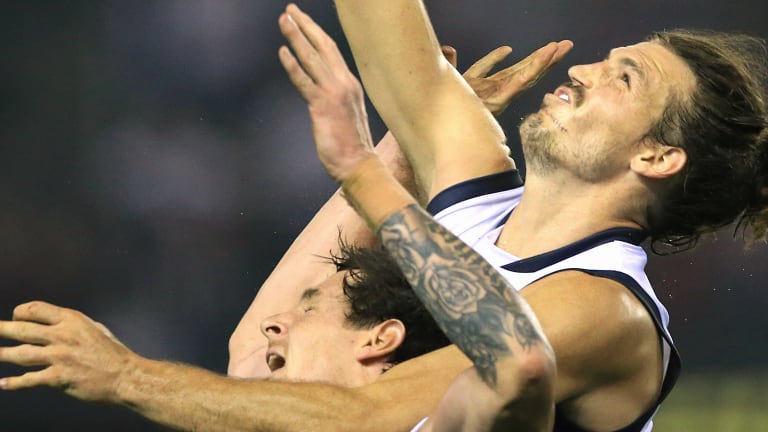 ‘‘I actually thought it was a free kick. I probably carried on a little too much. I don’t tend to worry about umpiring decisions but when there is two seconds left on the clock there is nothing else to worry about,’’ Richardson said.

He agreed with Carlisle’s call that he should have taken the mark. ‘‘That’s a great response and that is true,’’ Richardson said.

The coach conceded the team’s turnaround in form was due to his preparedness to give his players a greater say in the planning for match against GWS.

Richardson revealed that the players told the coaches they should be given the chance to match the Giants’ big name midfielders and he backed them when he determined match-ups. ‘‘There was probably a stronger sense from the players that we’re ready to be trusted,’’ Richardson said.

‘‘From a coaching point of view I had possibly been a little bit too conservative with some of our match-ups.’’

The shift in thinking led to St Kilda recording 67 inside 50s to the Giants’ 46.

The Saints also thought about their structure ahead of the ball, which had led to just 19 goals in the previous three rounds with the senior players asking for the forwards to stay at home more so they had targets to kick to when they emerged from stoppages.

‘‘Paddy showed a bit today,’’ Richardson said. ‘‘Hopefully that is a bit of a look at what we’re going to get going forward.

‘‘He will learn from the game but he also should be pretty proud of the fact that he kept going and kicked a big goal late when there was a bit of pressure on.’’

He praised the effort of ruckman Tom Hickey, who defeated Dawson Simpson, with the 27-year-old Saint finally showing the form that made him the Saints’ No.1 ruckman in 2016. Hickey had 18 disposals compared to Simpson’s eight and was a presence at stoppages. ‘‘Hickey really gave us some drive,’’ Richardson said.

St Kilda midfielder Luke Dunstan said the players refused to panic even if they had a couple of goals in succession kicked against them and preferred to stick to their method rather than reacting.

‘‘We’d spoken during the week [about the fact] we had gone away from what makes us a good footy side … so that was the focus all week and it is going to be much more the focus going forward.’’

Giants’ coach Leon Cameron conceded the midfield battle went the Saints’ way and it was only the work of his team’s defenders that enabled them to escape with two points.