St Kilda coach Alan Richardson won't be made a scapegoat for the club's disappointing AFL season, which hit another low with a 35-point loss to the Western Bulldogs on Saturday night.

Club football boss Simon Lethlean threw his support behind the embattled coach the day after St Kilda slumped against the injury-depleted Dogs at Etihad Stadium. 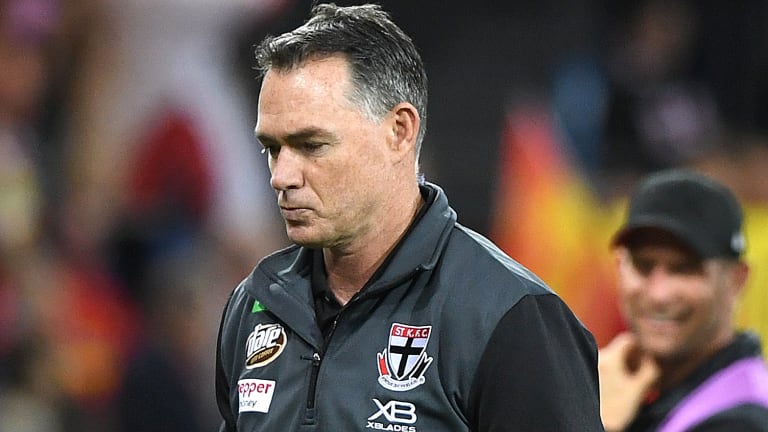 Simon Lethlean has thrown his support behind Alan Richardson.

The Saints led by 28 points early in the second quarter but Richardson was left to rue his players' meek response when the Bulldogs piled on eight goals to none in the third quarter.

Richardson, contracted for another two seasons, has drawn sharp criticism this year after his team failed to live up to expectations of a return to finals.

But Lethlean is adamant the coach won't pay for the dire premiership campaign with his job.

"We're going to support him, not look to blame him, and get the best people around him," Lethlean told 3AW radio.

"My view and the club's view is that 'Richo' is taking us forward and in order for him to take us forward we have to make him the best coach he can be.

"That requires new voices in the coaching areas to support and guide the program and we need our players to dig in and be more competitive and improve our list as well.

"That's our focus … We're not looking to scapegoat Richo. We think he's the right guy."

Changes have already begun at the club, with assistant coaches Simon McPhee, Rohan Welsh and Lindsay Gilbee told they will not be offered new contracts.

Former Adelaide player James Gallagher has also been appointed to the role of list manager vacated by Tony Elshaug earlier this year.

While Lethlean pledged more support for Richardson, he put the heat on St Kilda's underperforming players.

"It's not all about the coaching. The players need to take responsibility," he said.

"They need to work harder and take a look at themselves and understand why it is that they can have great patches in games and really poor ones.

"The leadership needs to look at itself too and how it impacts those moments.

"We've got to show on-field leadership to turn things around when things aren't going well."