Mohamed Salah struck again to ensure an underpowered Liverpool maintained their perfect early-season record in a 1-0 win over Brighton & Hove Albion at Anfield, climbing to the top of the Premier League.

Salah, the league's top-scorer last year, scored the first-half winner to give Liverpool nine points from three matches after Manchester City's spotless start to their title defence was halted by a 1-1 draw at newcomers Wolverhampton Wanderers. 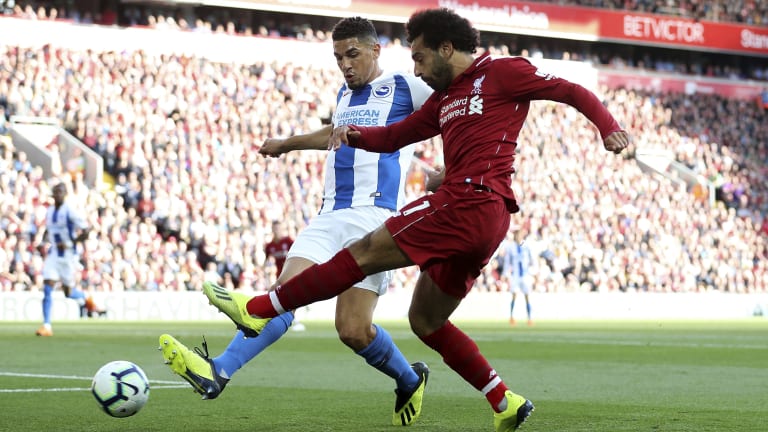 On a day when Arsenal earned their first win under Unai Emery, a 3-1 victory over West Ham United, the two title favourites, while far from their best, both dominated their matches but with very different outcomes.

City, who won their first two games of the season in fine style, again largely controlled affairs against Championship winners Wolves at Molineux, but had to come from behind to earn a point against Nuno Espirito Santo's impressive side.

Wolves had gone ahead fortuitously after the break with Willy Boly's diving header actually going in off his arm only for Aymeric Laporte to then equalise with a header, his first goal for City.

The champions hit the woodwork three times, once through Raheem Sterling, whose thunderbolt was tipped brilliantly on to the woodwork by Rui Patricio, and twice from Sergio Aguero, whose free-kick struck the crossbar in the dying seconds.

Manager Pep Guardiola felt his side had been let down by fragile defending but reckoned it was still a good point against the newcomers, who demonstrated why they could thrive in the top flight.

In the day's late game, though, Salah demonstrated the clinical edge City had earlier lacked with his slide-rule, left-foot finish handing the edge to Liverpool.

It earned a lacklustre Liverpool a two-point lead over unbeaten Manchester City and Bournemouth, although Chelsea, Watford and Tottenham Hotspur all have chances to join them on nine points in matches to be played on Sunday and Monday.

Arsenal prevailed after two defeats under Emery, but only after Marko Arnautovic's first-half goal for West Ham prompted brief thoughts that the home side might lose their first three league matches of the season for the first time since 1954-55.

Arsenal, though, responded quickly with a goal from Nacho Monreal, before a second-half own goal from Issa Diop and a Danny Welbeck clincher in injury time left the Hammers still searching for a first point under new boss Manuel Pellegrini.

Emery, reckoning that it was an important win for the fans, dismissed rumours of a row with Mesut Ozil, saying the midfielder was not on duty because of illness. 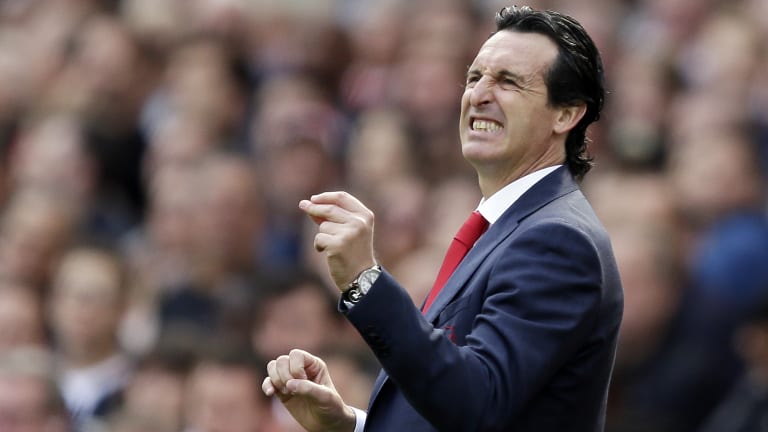 "No problem with the player. It isn't true, that information," Emery told reporters. "I don't know who started it but if you ask me, the doctor, or the club, he was sick."

It was the worst start by a West Ham manager since Avram Grant lost his opening four league games in 2010-11.

Bournemouth and Everton maintained their unbeaten starts to the season in a dramatic match at Dean Court in which both sides ended with 10 men.

Everton's new Brazilian striker Richarlison was dismissed for a headbutt aimed at Adam Smith just before the break while Smith himself was sent off for a second-half foul on Theo Walcott.

The home side then fought back after Walcott and Michael Keane had put Everton two up, with goals in the last 15 minutes from Josh King, from the penalty spot, and Nathan Ake.

Southampton's difficult start continued with Harry Maguire's stoppage-time winner seeing Leicester City earn a 2-1 comeback win, a victory that will have brought much pleasure to visiting manager Claude Puel on his return to his former club.