Australian Sally Fitzgibbons has all but bowed out of the WSL world title race after she was eliminated from the Rip Curl Pro Portugal quarter-finals by Tatiana Weston-Webb.

The world No.3 was outmuscled by the Hawaiian-born Brazilian 13.67 to 9.14 in four-to-five foot peaks on Saturday at world-class Peniche beachbreak Supertubos. 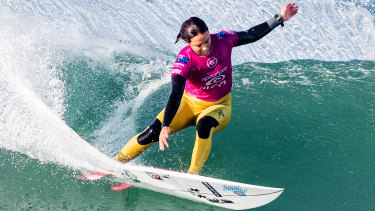 To claim the title Fitzgibbons would need to win the final event of the season at Honolua Bay in Hawaii and local Carissa Moore and Americans Lakey Peterson and Caroline Marks would all need to finish lower than 14th place.

Given that the trio are the form surfers at this stage of the season, Fitzgibbons' mission seems all but impossible.

Fitzgibbons was on the backfoot off the buzzer, inexplicably allowing Weston-Webb to take the first wave despite being in a better position.

The Brazilian was dominant, paddling for everything from nippy insiders to meaty closeouts, and a rattled Fitzgibbons finished with her best score a paltry 4.37.

Reigning world champion Steph Gilmore and fellow Australian Nikki Van Dyke also exited in the quarter-finals with the former going down to Marks and the latter losing to Peterson.

The women's race was blown wide open later when second-placed Peterson beat Moore 13.23 to 11.50 in the semi-finals, before herself being beaten by Marks 13.73 to 6.27 in the decider.

The 17-year-old American claimed her first event win of her career and has a chance of claiming the world title in her first year on the Championship Tour.

Just 5190 points separate Marks and Moore, with Peterson between them, and 10,000 points awarded to the winner at Honolua Bay.

The men's draw also held some surprises as Brazilian Italo Ferreira beat South African Jordy Smith 18.43 to 6.17 in a stunning aerial dogfight to put himself in the yellow jersey going into the season finale at Pipeline.

Ferreira opened his scoring by landing a double-rotation frontside air, which the judges awarded with a perfect 10, and followed it up with two full rotation airs on his next two waves, the best of which put his score on 8.43.

The Brazilian jumped into first place on the leaderboard, overtaking Smith who fell to third and reigning world champion Gabriel Medina who dropped to second.

Earlier on Saturday, Ferreira also knocked the last Australian out of the event by beating Jack Freestone 18.40 to 16.87 in another aerial battle.