Sam Burgess has declared to his teammates he will be fit for the start of South Sydney's finals campaign next weekend.

"He'll definitely play,'' hooker Damien Cook said. "I spoke to him on Friday and he said he'll be fine. 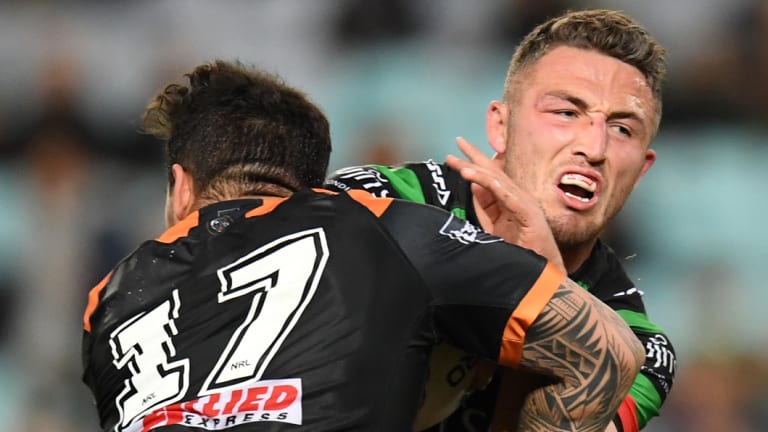 No worries: Sam Burgess hits it up against the Tigers before leaving the field with a hamstring twinge.

"Ask anyone at this time of season and nobody is 100 per cent. All teams are battered and bruised.

"But everyone is excited for it. And to have Sam in the team, he leads from the front, and even though he didn't play his normal 80 minutes the other night, he still put up some good numbers.

"Because we were leading the game, we were able to rest the 'Ferrari'.''

The tough Englishman heard a ''pop'' in his left hamstring but scans cleared him of injury.

Cook, who happily referred to himself as a trusty ''Toyota Camry'', was also feeling refreshed the past fortnight after shaking off the Origin hangover.

It will be his first September campaign since 2015, when he was at the Bulldogs. Cook was actually an outside chance to play in the 2014 grand final for Canterbury –  against Souths – only for Des Hasler to opt for Moses Mbye to replace the injured Mick Ennis.

"You start to feel the load after Origin, but Paul Devlin and the high-performance staff at our club have been really good managing the loads,'' he said.

"The last two games, even though the Raiders result didn't go our way, the body has felt sharp and I'm ready to go.''

Souths are expected to play the Sydney Roosters, who contained Cook to just 58 metres in round 22, or Cameron Smith and the Melbourne Storm.

Souths players were told to switch off for the weekend and worry about who they play come Monday.

Souths will have an extra 24 hours recovery over the Storm and 48 hours more than the Roosters.

Cook was not worried about the Roosters keeping him quiet a second time, whether it be next weekend or deeper into September.

"We went through that game, and I asked our attacking coach, Dave Furner, if there were any opportunities I may have missed,'' Cook said.

"But they just got the better of us. They controlled us well. We didn't play well as a team and went away from our style of play a few times. We also made too many errors.

"As much as I love my running game, when it's not there I need to make sure the other parts of my game are on, and I felt they have been the past couple of weeks.''

Souths dropped three straight games before they burst back to life on Thursday night with a 51-10 spanking of the Wests Tigers.

Burgess hobbled from the field with 25 minutes left on the clock, and his teammates posted four tries in nine minutes late in the game.