The mayor of San Francisco endorsed a call by civic groups on Monday for Major League Baseball to impose a serious penalty on the chief executive of the San Francisco Giants for a public altercation with his wife that was caught on video this month.

A coalition of women’s groups posted an open letter online Monday that called on Commissioner Rob Manfred to commit to “firm and appropriate action in disciplining” the executive, Larry Baer.

The letter said Mr. Baer “cannot be allowed to resume his high-profile role without significant consequences and accountability.”

The mayor, London N. Breed, said in a statement that she agreed that “Major League Baseball needs to send a message that any and all acts of violence against women is unacceptable.”

“Every little girl, every woman should be able to attend a Giants game with a clear sense of the organization’s values,” Ms. Breed said. “I share in the call to action by the women who have written the commissioner calling for greater accountability.”

The video clip, which was first posted by TMZ Sports, appeared to show Mr. Baer and his wife, Pam, arguing in a public plaza. Ms. Baer was sitting in a chair, and her husband was standing next to her.

Mr. Baer was shown lunging for something in his wife’s hand and then forcefully grabbing her, setting off a struggle that included her falling to the ground and screaming, “Oh my God!”

After the video of the episode, which occurred on March 1, became public, Mr. and Ms. Baer released statements that day denying that a physical altercation had taken place. 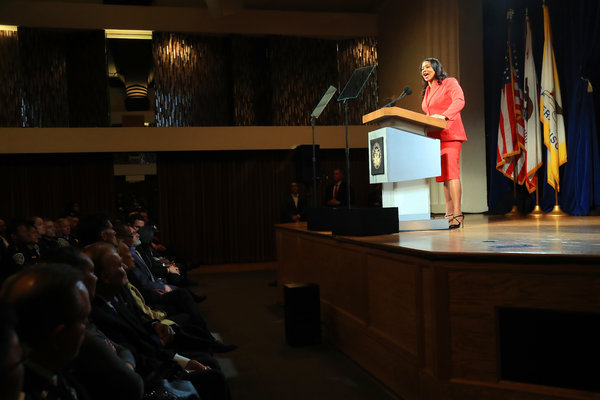 “Regrettably today we had a heated argument in public over a family matter,” the couple said in a statement. “We are deeply embarrassed by the situation and have resolved the issue.”

Ms. Baer later released a statement that said she fell accidentally when her chair “began to tip.”

“Due to an injury I sustained in my foot three days ago, I lost my balance,” she said. “I did not sustain any injury based on what happened today. Larry and I always have been and still are happily married.”

The San Francisco Police Department said Monday that it had investigated the episode and submitted its findings to the office of District Attorney George Gascón. Max Szabo, a spokesman for Mr. Gascón’s office, confirmed that the matter was under review.

A spokesman for Major League Baseball did not immediately respond to a request for comment on Monday. But after the video became public, the league said it was aware of the episode and would "immediately begin to gather the facts.”

A spokesman for the Giants said Monday that Mr. Baer was unavailable for comment. In a statement, the team said it appreciated “the sentiments and perspectives expressed” by the mayor and the civic groups that wrote the open letter.

“We have worked closely with the mayor and with many of the women who authored the letter and we deeply respect them and their work in the community,” the statement said. “We take this matter very seriously and we appreciate their concerns. Because it is currently under review, we have no further comment at this time.”

The open letter was signed by a half-dozen local groups and several civic leaders, including the president of the San Francisco Commission on the Status of Women, a past president of the organization and a member of the board of directors of Bay Area Rapid Transit.

The letter did not specify how its signatories would like to see Mr. Baer punished, but it did provide a list of suggestions, including a strong public statement from the league and the requirement that Mr. Baer undergo treatment, pay a "substantial financial penalty” or face a “significant suspension” from activities involving the Giants or the league.

“While Mr. Baer has expressed regret for his behavior, we believe this incident represents more than an embarrassing private quarrel that spilled into public view,” the letter said. “It is a test of how seriously Major League Baseball views its responsibility to hold its leaders, as it does with its players, to the highest standards of personal conduct.”