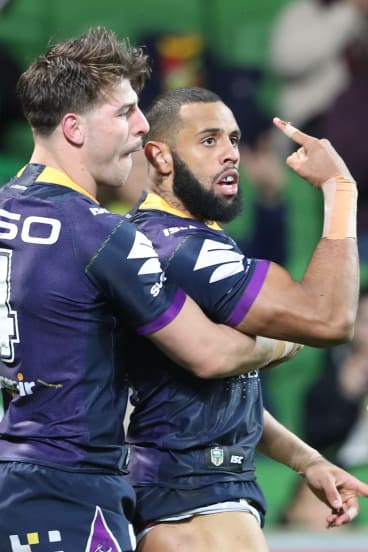 Melbourne Storm winger Josh Addo-Carr described it as “scary” how much improvement was left in his team’s attack.

On Saturday night the Storm showed how right he was by demolishing the Canberra Raiders at a wet AAMI Park.

If the rest of the NRL aren't scared yet, perhaps they should be as the margin could have been higher but for Storm coach Craig Bellamy opting to rest fullback Billy Slater and hooker Cameron Smith in the closing stages.

Melbourne's try-scoring list showed how broad their attack is, scoring on both wings and having prop Nelson Asofa-Solomona and backrower Felise Kaufusi on the sheet.

Recently returned prop Jesse Bromwich was back to his powerful best with 154 all-run metres in a little over 45 minutes on the field. He will be ready for a bigger load by finals time.

The first-placed Storm have a top-of-the-table showdown with the Rabbitohs at ANZ Stadium on Friday night and will touch down in Sydney full of confidence.

No one in the NRL has won back-to-back premierships since the 1990s but with five games to go Craig Bellamy's side showed they are right on track to buck that trend.

“We had a fair bit of the footy throughout the game but I was real happy with our defence,” Bellamy said.

“It was a defensive game last week and to back that again tonight was a really good and to score a few points along the way was nice as well.

“Last week we struggled to score points but sometimes that comes down to how the game goes, tonight some of our construction of tries was really good.

“We will review it and hopefully we can keep that up or even get a little bit better.” 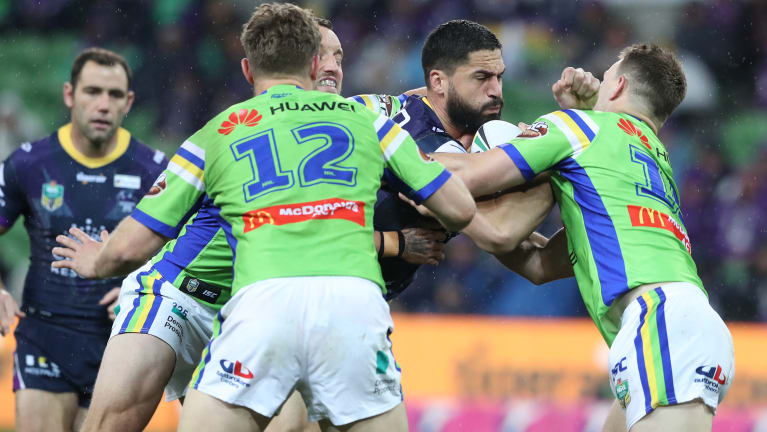 Canberra had a tough week leading up to the game with coach Ricky Stuart revealing post game that utility back Michael Oldfield injured his knee last week and will miss the rest of the season as it's a six-week injury.

The Raiders struggled in the opening minutes to find the line between defending aggressively and breaking the rules as they conceded the first five penalties of the game.

“With the changes we have had, I had a couple of blokes out of position, a guy I’ve had playing front row was at centre so I knew we would have to be very, very good and have a lot of things go our way if we were going to be a chance.”

On the early penalties, Stuart was blunt: "Too many penalties and too many errors," he said.

Those extra possessions saw Cameron Smith kick a penalty goal and the Storm score two tries as Billy Slater set up Kaufusi before Cameron Munster made a classy solo run, dummying to his left and stepping between multiple defenders.

Munster was named player of the match by the Storm's old boys post game winning the John Ribot Medal.

But the Raiders did find their groove midway through the half and strung together a large slice of possession by forcing the Storm into defending repeat sets. On the half hour Josh Hodgson executed a clinical play near the line to thread an outside pass to backrower Sia Soliola who scored.

Not to be outdone, the Storm responded to close out the half with two more tries. Jahrome Hughes made a diving pass to Suliasi Vunivalu who scored in the right corner, then some quick passing to the left saw Munster set up Curtis Scott on half-time as the home side led 24-4.

Just minutes into the second half Melbourne went further ahead following a tidy try from Addo-Carr but again the Raiders showed some fight as Joey Leilua scored next to the post, cutting the lead to 30-10 with an hour gone.

Towering prop Nelson Asofa-Solomona responded with a forceful run on 62 minutes and on the kick-off Munster broke the line at halfway and put through a grubber kick which found Addo-Carr who bolted before passing off for Scott to score.