There are a few photos hanging with pride at famed rugby league nursery St Dominic's College in Sydney's west, each to signify graduates who have represented Australia at their chosen sport.

Greg Alexander has a spot, Brad Fittler another. And already the nail is being lined up for Nathan Cleary. Premature? Maybe. But who is to argue he won't get there one day? 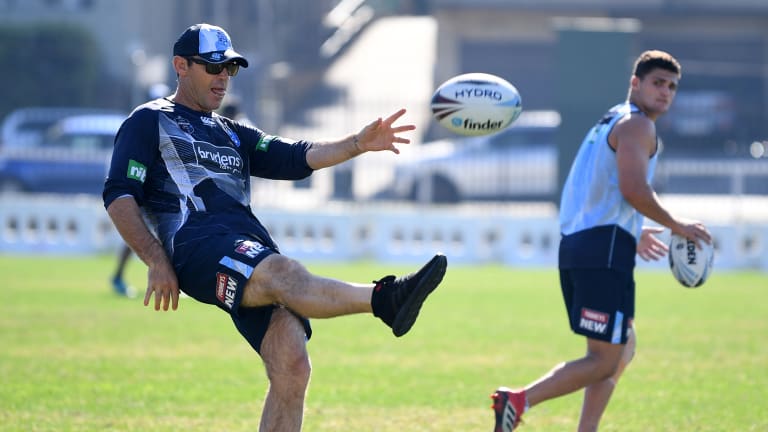 Churning out NRL-calibre players and coaches is nothing new for a school which trumpets Tim Sheens, Des Hasler, Luke Rooney and Dallin Watene-Zelezniak as former students, but its influence on the fresh-faced Blues is undeniable.

Its coach, selection adviser and on-field general have all emerged from its halls and playing fields, which have moulded the minds of a new look NSW brains trust.

"It's an amazing achievement," St Dominic's' physical development co-ordinator David Mackinnon said. "I know the staff here are very proud of that. We take pride in not only developing them as rugby league players but as good people as well."

Before he plucked Cleary from Penrith and made him the poster boy of his first baby Blues side, Fittler stumbled upon his NSW halfback at a schoolboy training session.

Every now and again, Fittler will drop into his alma mater to help with a bit of coaching. They reckon you count the time of his stay in hours, not minutes. A few years ago he lobbed at St Dominic's and immediately recognised a face, even if he wasn't expecting it.

He watched him and said, 'geez, he's got something'

"It was funny when 'Freddy' came to training," Mackinnon recalled. "Initially, he didn't know Nathan went to the school. He turned up ready to coach some of the boys and he just pointed at Nathan straight away and said, 'that must be Ivan's young bloke'.

"He watched him and said, 'geez, he's got something'."

Fittler had one message back then for the kid who will now lead the state at the MCG in rugby league's most intense arena: just talk more.

"He had a chat with him and said the main thing he needs to work on is talking with the boys a bit more and his communication with the team," Mackinnon added.

"[Cleary was] a quiet-natured kid and from year 10, where he hardly spoke a word, to year 12, he got a lot more confident, particularly on the field with his communication. That was some advice he took from Freddy and ran with it."

For his part, Cleary didn't have to do a double take when Fittler arrived at St Dominic's. He knew he had played with his dad Ivan in their Roosters days, but couldn't have known he would be lining up running his team in the Origin arena only a couple of years into his NRL career.

"It was pretty cool," Cleary said. "I’ve known Freddy since I was a little kid … he played with my dad. I didn’t see him for a while and he came into school and all the boys were rapt that he was there.

"It was pretty cool to work alongside him and then a couple of years later he’s my Origin coach. It’s pretty crazy. The boys were all in shock to have someone like Freddy come out to the school and work with us. It’s a credit to himself."

Just a couple of weeks ago, the Clearys returned to St Dominic's for a parent-teacher interview for Nathan's younger brother Jett. Just like they stressed with Nathan, school is a priority over football stardom. 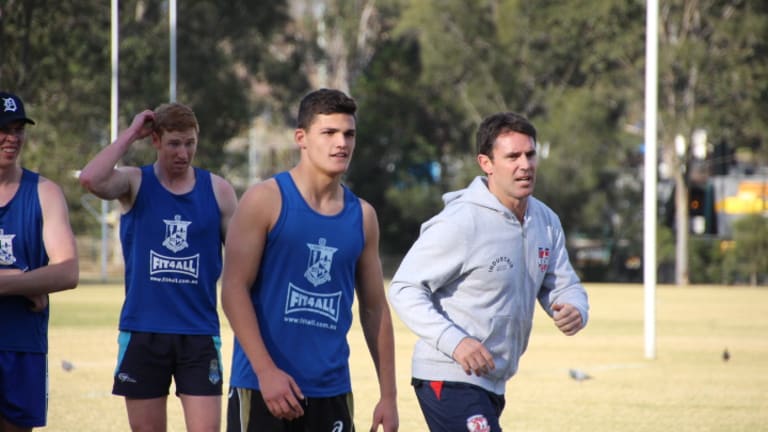 Fittler was just as bright with his head in the books, if not on a slightly faster trajectory to first grade.

"Brad was a real enigma," his old teacher Chris Hobbs said. "He was a brilliant sportsman and could turn his hand to anything. He would play everything on offer, but he was a very, very bright student. He always made sure he did what he had to do.

"He made sure he was achieving at levels that would open up options. [But] once he went into grade sides and had guys like [Peter] Tunks and [Peter] Kelly in his ear, they were saying, 'you don't need to do that'.

"I can tell you now he's an exceptional man. Even now when I ring him about things he always makes time."

Which is seemingly all it will take until Cleary's image hangs on the wall alongside his NSW coach and adviser.