Adam Scott has offered a frank assessment of his struggle for form as he faces genuine major championship uncertainty for the first time in his stellar career. 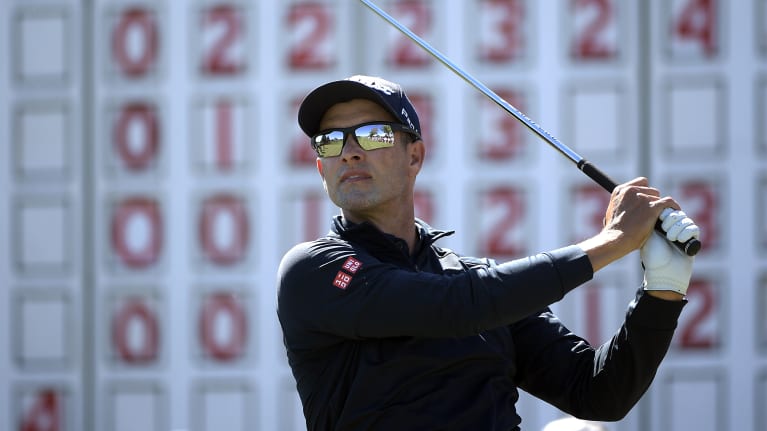 Consistent: Having played in every major since the 2001 British Open, Scott (67) sits behind only Sergio Garcia (75) for most consecutive starts.

Having dropped to world No.71 without a win in two years and a top 10 result in almost 12 months, Scott faces a month-long battle to qualify for the US Open which begins at this week's Players Championship at TPC Sawgrass.

But in trademark fashion, the Queenslander took ownership of his predicament which threatens to end his phenomenal active streak at the majors.

Having played in every major since the 2001 British Open, Scott (67) sits behind only Sergio Garcia (75) for most consecutive starts.

Missing out would be a difficult pill to swallow for the former world No.1.

He has never struggled for exemptions into the four big events during a career highlighted by 13 US PGA Tour victories, including the 2013 Masters.

"Obviously, it's not the situation I want to find myself in, but if I look at the past 12 months, I'm not surprised," 2004 Players winner Scott said at TPC Sawgrass on Wednesday.

Scott's achilles heel has been on the greens, ranking a lowly 193rd on the US Tour for strokes gained in putting.

"My putting has been erratic; it's been poor overall but with good and bad (form) in there," he said.

"When your confidence isn't there and you're fighting to get it back, (those mistakes) are shattering."

Long considered golf's best ball striker, Scott remains positive about his chances of qualifying for the US Open, which will be held at New York's iconic Shinnecock Hills course.

"I've put the time in. I've worked hard on my game, so it's about just letting it happen," Scott said.

"I still feel I can have a good year, because I feel like things are coming more under my control and I'm seeing good signs."

The 37-year-old hasn't even contemplated teeing up at sectional qualifying for the US Open, instead backing himself to sneak inside the world's top 60 golfers who qualify on the May 21 and June 11 deadlines.

"I'm not sure; I honestly haven't really thought about (sectional)," Scott said.

"I'm optimistic and I think I'll have a couple good weeks and get myself in."

Fellow Australian Marc Leishman backed Scott to return to the form which saw him win back-to-back US Tour events in 2016.

"Oh, he will definitely be back," Leishman said.

"You have peaks and valleys in your career and unfortunately he's struggling a bit.

"Last year, Jason (Day) had a tough year, but now he has won twice in 2018 and I think Scotty will do the same thing.

"I wouldn't be too worried about Scotty."