SEATTLE — In the last moments of this tense, tight game, as his team huddled to take a final snap and secure not just a win over the Kansas City Chiefs but a surprising spot in the playoffs, Pete Carroll prowled up-and-down the Seattle Seahawks’ sideline, shouting, hugging, high-fiving and pumping his right fist defiantly in the cold, wet air.

Even for a coach known for buoyant energy, the display of sheer elation put a fine point on how utterly special a victory this was for Carroll and his team.

Remember that very little was expected of the current-version Seattle Seahawks. Many even predicted them to be among pro football’s bottom feeders. This was a team that missed the playoffs last season for the first time since 2011, then underwent a deliberate overhaul that tossed aside its best-known defensive stars, then began the season with a pair of anemic losses that seemed at the time to be the starting blocks for a year of losing and misery.

Given that background, it made perfect sense that the 67-year-old Carroll — along with every member of a Seattle team stacked with rookies and second-year players who next month will be in the postseason for the first time — was prouder than usual at the close of Sunday’s 38-31 win.

“There is an emotion to it that is deep and it’s because there wasn’t many people that thought we could do this,” Carroll said. “Most everybody thought we didn’t have a chance” at the playoffs. 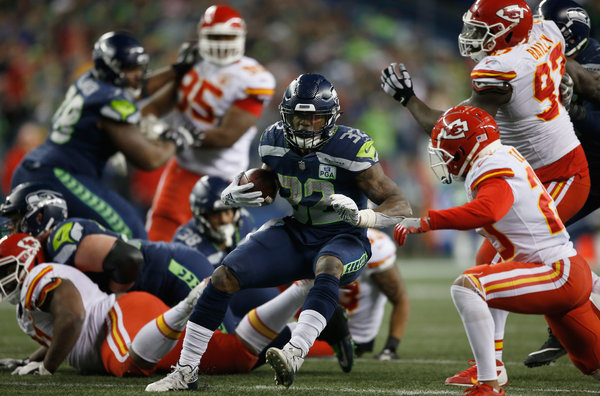 For Seattle, Sunday evening was a night to celebrate perseverance. The team took quite a while to pull the covers from its 0-2 start. It had a .500 record at midseason, and only dim, distant playoff hopes.

Carroll and his small passel of veteran leaders — quarterback Russell Wilson, wide receiver Doug Baldwin and linebacker Bobby Wagner to name three — hung together when they could have folded.

Then, somehow, something clicked.

In the locker room Sunday night, Carroll chalked up the turn in this season’s fortunes to a true and solid discovery.

“We know who we are,” Carroll said. “We know what we are trying to create each week. We know how to do it. When you have that connection with who you are, you become very powerful. I love that that’s where we arrived, because it was a long two years of not being able to get back to it. We were always trying. We always had it in mind.

“We just couldn’t get it right.”

What Carroll was speaking to in his familiar New Age patois was the fact that the Seahawks have struggled to reclaim their identity since the inglorious end to Super Bowl XLIX in February 2015, when a short Wilson pass near the goal line was intercepted to seal victory for the New England Patriots.

For years, Seattle appeared dogged by the shadow of that ugly loss, and without a sense of something deeply positive to hold on to. Divides among the team formed, and the defense grew old, injured, discontent. The offense was an equal mess, epitomized by a running game so bad that Wilson’s total of 586 rushing yards last season was at least double that of any of his running backs.

During the most recent off-season, though, Carroll and the team’s general manager, John Schneider, oversaw a remarkable change. Virtually everyone was deemed expendable. Stars like Richard Sherman and Michael Bennett: gone. Tight end Jimmy Graham: gone too. Adding to the upheaval, the veterans Kam Chancellor and Cliff Avril retired with injuries.

As this roller coaster ride of a season has worn on — through big wins over Minnesota, Carolina and Dallas; through tough losses to the Los Angeles Rams; even through the unexpected defeat last week to the lowly San Francisco 49ers — Seattle’s understanding of what leads to success has done nothing but solidify.

The Seahawks entered Sunday’s game against the Chiefs as the winners of four of their past five games. Remarkably, they also had become the league’s best running team, hewing closely to a playing a style more reminiscent of the grinding, 1970s N.F.L. than a team from the modern, pass-obsessed era typified this year by the Chiefs and their young, electric quarterback, Patrick Mahomes.

Still, Kansas City (11-4) played catch-up nearly all game long, an unenviable position while up against these Seahawks. Seattle took its time. It didn’t cough up turnovers. The offensive line kept opening holes. Chris Carson, the team’s churning, second-year running back, kept plowing powerfully forward. When Carson didn’t have the ball, Wilson either scooted off for his own long runs or launched arcing, pinpoint passes, three for touchdowns of his own.

The 69,000 fans inside CenturyLink Stadium rocked and roared and swayed deep into the Seattle night, feeding off an energetic coach and his irrepressible team, heading toward the playoffs with unexpected confidence.