A Rugby Australia board member has revealed the dramatic battle to have the Wallaroos wear the Commonwealth Coat of Arms.

On the eve of the Sydney women's club final between Warringah and Sydney University, RA board member Ann Sherry spoke of her horror when she realised in the lead-up to the 2013 Women's World Cup that the national women's XVs team did not wear the kangaroo and emu on their Test match jerseys.

"I looked at the jersey and immediately saw it [wasn't there] so I asked, 'Why isn't the Coat of Arms on the jersey?'," Sherry said. 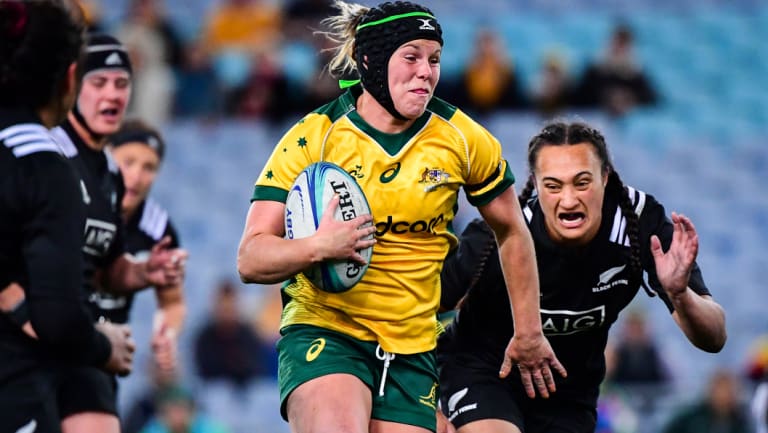 Worn with pride: Emily Chancellor in the Wallaroos jersey during Australia’s clash with the Black Ferns in August.

"Everyone looked at me blankly and someone scurried out of the room to find out. It was one of those things, nobody had thought about it."

Sherry was the first woman to sit on the board of the then-Australian Rugby Union (now called Rugby Australia) and had been in the role for less than a year when the issue came to light. 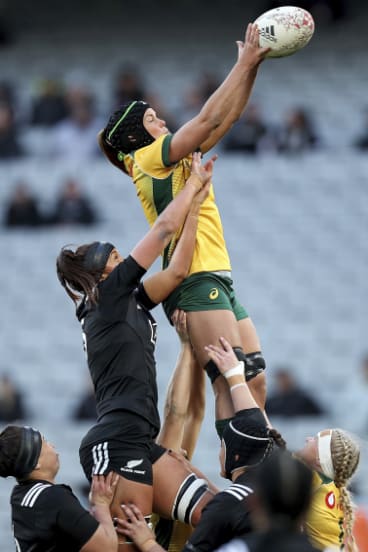 Then-ARU boss John O'Neill had helped secure a future for women's sevens rugby with the addition of the sport to the summer Olympics schedule and women's XVs enjoyed the steadfast support of advocates such as Kerry Chikarovski, but Sherry said the jerseys pulled her up immediately.

"The women were so forgotten. Even the Australian Schoolboys had the Coat of Arms and the Wallaroos didn't. It that classic oversight issue, nobody had thought about it but to me it was glaring," she said.

It was little more than a week before the Australian women left for France. Using the Commonwealth Coat of Arms required permission from the Department of Prime Minister and Cabinet and even when that was secured, the ARU proposed an iron-on solution.

"I said, 'No, I don't think so'," Sherry recalled. "It would have made them look like second-class citizens. Just the symbolism of an iron-on. It would have been better than nothing but it was not right and you've got to stand for something. Sport stands for a lot but individually we've all got to stand for something. For me, I was sure that they would not be treated like second-class citizens."

So the Wallaroos trooped off to France as a fully fledged representative team. Five years on, the story made eyes bulge when Sherry told it at a fundraising lunch for the team in Sydney this week.

Emily Chancellor, an Australian flanker who will start for Uni alongside some of her Test teammates at Woollahra Oval on Saturday morning, said she could not believe how far the game had come in a short time.

"From my first year in the squad in 2015 just having one training camp and no Test matches, to a three-match series against New Zealand, Canada and England before the [2017] World Cup, to this year having two Tests and to hear there’s possibly going to be five next year in a non-World Cup year, it’s a really great opportunity for us to develop our team," Chancellor said.

Chancellor converted from netball to rugby at around the same time Sherry was flirting with sewing on the Coat of Arms herself. Now Chancellor flits between formats depending on the time of year, this year turning out in the Aon Uni 7s, her Sydney Uni strip and the Australian jersey – kangaroo and emu intact – for two Tests against New Zealand.

Australia has bid to host the 2021 Women's World Cup and Rugby Australia has put an experienced administrator, Jilly Collins, in charge of its Women's Rugby program to ensure all formats of the women's game go from strength to strength.