Minutes after the Australians had trudged from the field at Manuka Oval on Monday afternoon, grinning from ear to ear after claiming their first series win in over a year, Pat Cummins went over to coach Justin Langer.

The record books will show that Australia finished with three wins, two losses and a draw, but a couple of thumping victories to finish a see-sawing summer had Langer breathing a sigh of relief, having just over a week ago conceded that the thought of losing to Sri Lanka was playing heavily on his mind. 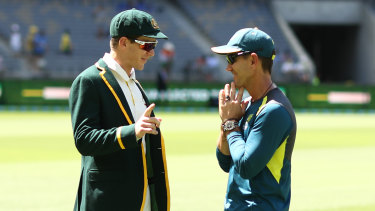 Justin Langer and Tim Paine have a chat. Credit:Getty Images

“From that point of view, it's a positive summer,” Langer said. “It's a good series win. [There were] some really good things to come out of this series and the whole summer. It's more fun winning than losing.”

The counter argument is that Sri Lanka were a seriously average team, debilitated by injury and off-field dramas, which stood little to no chance of claiming a maiden Test win on Australian soil.

While that turned out to be the case, Langer rejected the suggestion Sri Lanka were a B-grade team and said his men could only beat who they were asked to. Test cricket, to Langer, is immensely tough, no matter the opposition.

“It's the same pressure,” Langer said. “We've got a really young group of blokes besides Usman [Khawaja] and Nathan Lyon. Trust me, it doesn't matter who they're playing against, they feel the pressure of playing Test cricket.

“That's why it was so nice to see some of the young guys perform well in this series. They've got a couple of good fast bowlers. I had [pressure] as a player, now I've got it as a coach and you can only play who you've got in front of you.”

There is a sense that performances from the Sri Lanka series will count for little when selectors get serious later in the year and pick their best XI for the first Ashes Test.

By then, there will have been four more Sheffield Shield games, plus a final, to go with a 50-over World Cup to get a gauge of white-ball form and an Australia A tour in the lead-up to the Edgbaston Test.

Fifty-fifty calls may go to the way of players who put good performances on the board in the Sri Lanka series but it is hard to imagine selectors picking players who aren’t in good form no matter what they did some six months ago.

Langer, who scored 23 Tests hundreds himself, emphasised just how thrilled he was to see Australia break their century drought in Canberra. Joe Burns (180), Travis Head (161), Kurtis Patterson (114 not out) and Khawaja (101 not out) salvaged pride after a number of players squandered chances to go on and make three figures.

“We had a great partnership in Brisbane and then we had a massive partnership here and four guys were rewarded,” Langer said. “We all know that none of our guys had scored a hundred until this match and to finish off the summer with a hundred that's really pleasing. The best way to learn to score hundreds is score hundreds in Test cricket.”

Langer’s highlight across the six Tests may surprise a few people, for it is not an individual knock or wicket that takes the cake in his opinion.

Instead, he believes Khawaja’s catch in Adelaide to dismiss Virat Kohli – diving away to his left in the gully – was simply brilliant.

“That catch is literally the highlight of my summer,” Langer said. “Because he'd worked so hard to get fit to play, so hard to get himself fielding better and running between the wickets better.