Darren Nicholls will be seen but unlikely heard when he makes his long-awaited NRL debut at the ripe old age of 29 for St George Illawarra.

The man wearing the Dragons No.7 on Thursday night in Melbourne speaks with a raspy Darren Lockyer-like voice and will rely on Gareth Widdop to bark most of the orders. 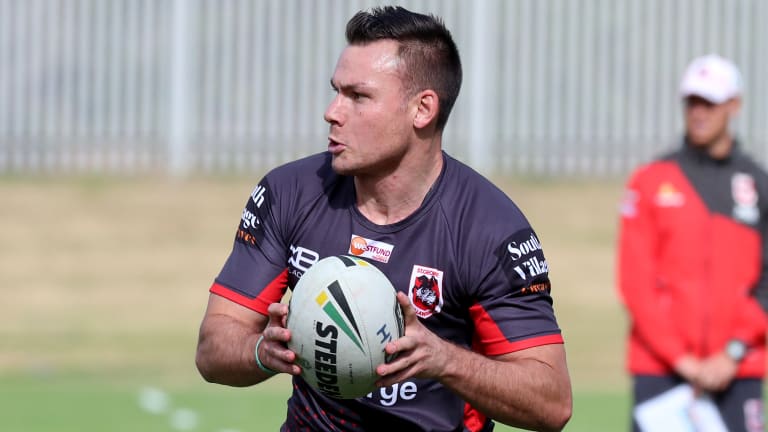 Croaky: Darren Nicholls will have to rely on Gareth Widdop to bark the orders against Melbourne.

A throat injury suffered while making a tackle in reserve grade earlier this year left Nicholls with a strained voice, something that can pose a problem for a player in such an important position.

Day surgery improved his voice a little, but like his NRL debut, Nicholls is prepared to play the waiting game while the nerves in his throat recover.

If somebody said I'd cop this throat to play NRL, I'd cop it three times over.

The Dragons will do it tough without five of their Origin stars, including regular halfback Ben Hunt, but Nicholls will be giving his all after completing a long, long apprenticeship at six different clubs.

"I'm no chance for 'X Factor' now," Nicholls quipped to Fairfax Media about his husky voice. "If somebody said I'd cop this throat to play NRL, I'd cop it three times over. I got a stray elbow as I was going to make a tackle, and the vocal chord got a bit messed up.

"We were playing against Wyong at WIN Stadium and we were defending our line, I came in to assist a tackle, but the bloke who had the ball spun and his elbow hit my throat. 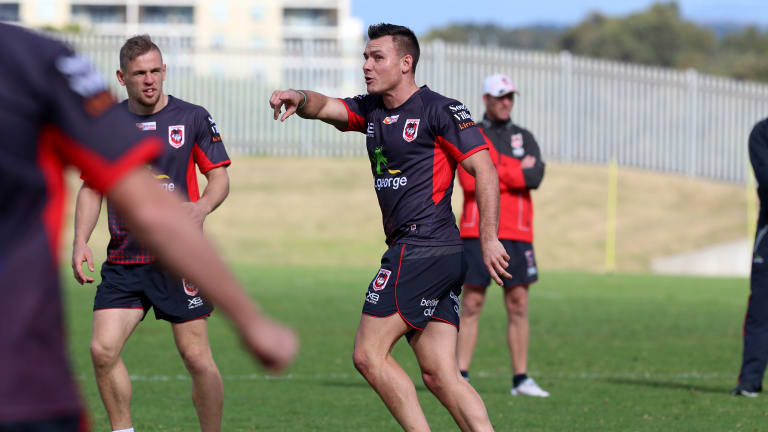 Seen, not heard: Nicholls gets his chance in the NRL and will overcome his throat troubles.

"It was painful but I didn't realise [how bad it was] until a couple of minutes later when the throat started to swell. I went to bark orders and people just looked at me because nothing was coming out.

"I went to the specialist a couple of days later and there was some haematoma in my throat and the right vocal cord was disabled.''

Nicholls expects his voice to improve but never fully recover. He said the first few games when he returned were tough because of his voice, and it was strangely easier to scream.

When Dragons coach Paul McGregor informed Nicholls last week he was a chance to play first grade, provided Hunt was retained by the Maroons, he tried hard to contain his emotions.

"I thought, 'I've been close before, I don't want to get too excited','' Nicholls said.

"We were waiting on the Queensland announcement, and as soon as he [Hunt] was named, 'Mary' confirmed I would play. I couldn't wipe the smile off my face.''

A Balmain junior, Nicholls played in France, returned for Wyong, landed his first-time contract with the Broncos – where he played with Hunt – was picked up by Souths, returned to Brisbane before he won last year's reserve grade with the star-studded Panthers.

McGregor said it was a just reward for a bloke who had never given up and continued to work hard.

"He's a genuine, genuine halfback, he has a good kicking game, defensively he's improved out of sight this year, and there's no better person who gets this reward than 'Dezie' tomorrow,'' McGregor said.

Debuts do not come much tougher than the Storm in Melbourne. Nathan Cleary was another halfback who played his first NRL game down south, albeit when 11 years younger than Nicholls.

St George Illawarra are on top of the ladder but will be without Hunt and NSW quartet Tyson Frizell, Paul Vaughan, Jack de Belin and Tariq Sims. A loss by 16 points or more will see them slip to second behind South Sydney who have the bye.

The Storm will also lose Billy Slater, Cameron Munster, Will Chambers, Tim Glasby and Josh Addo-Carr. Cameron Smith will be in action, something that was not lost on the Dragons players in the hours after he announced his retirement from representative football a few months ago.