Excitement is building for Ireland's historic three-Test tour of Australia, with senior Wallabies spreading the word around the states and the Sydney Test fast approaching sell-out status.

Less than 800 tickets remain for the third Test between the potential series decider at Allianz Stadium on June 23 and, with Australia's losing streak broken against New Zealand sides, it is expected the match will sell out soon. 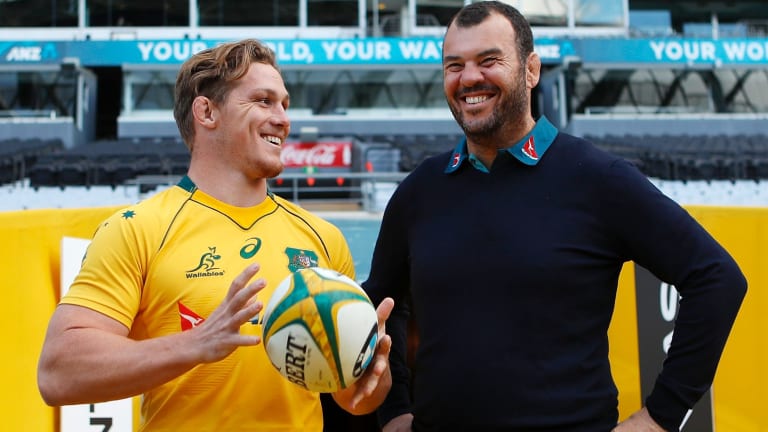 Pow-wow: Michael Cheika hauled in his 18 most senior Wallabies for a catch-up before the June series against Ireland.

More than 40,000 are expected for the opening Test at Suncorp Stadium in Brisbane on June 9 and a relieved Rugby Australia is reporting that sales have picked up for the second Test at Melbourne's AAMI Park.

The news came as the mood in Australian rugby brightened immeasurably after the Waratahs' hoodoo-smashing win against the Highlanders on Saturday night.

NSW Rugby said 12,308 turned up to watch the Waratahs 41-12 bonus point victory, a figure not a patch on the 2014/15 seasons but not a terrible result given there was a Swans game on at the Cricket Ground next door. If they can beat the Chiefs and Reds away over the next fortnight and the Ireland series lives up to its big-time billing, the crowds could start trickling back for the back end of the regular season and a finals campaign.

The Wallabies are keeping a lid on the hype leading into next month, with a squad announcement in Brisbane next week but little fanfare outside that.

However, Test prop Sekope Kepu revealed he was among the 18 senior Wallabies summoned for a leadership meeting at Sanctuary Cove earlier this month.

With a short preparation leading into the first Test, Michael Cheika called in the group for one day before sending them back to deliver the messages to their Super Rugby teams.

The meeting came on top of the rotational visits the Wallabies assistants have made to the states this season. Kepu said it was an "awesome" initiative, which also gave him the chance to meet the new forwards coach, Simon Raiwalui.

"He's been texting a few of the boys, reminding us of the things we spoke about up there and reminding us to push ourselves and be the best that we can be in our team environments and that can only be better for the Super Rugby teams," Kepu said.  "It's quite exciting to be honest."

Facing a likely long ban, Nabura is returning to New Zealand to prepare his case. It will be heard by a SANZAAR foul play review committee but can be taken further is he does not plead guilty or accept any penalty it offers.