Injury has depleted the Canberra Raiders' halves depth and Aidan Sezer says it's up to him and Sam Williams to step up to fill the void.

Part of that will be directing a trimmed down Green Machine forward pack, with Siliva Havili revealing they've already started implementing a new, more mobile game plan for the 2019 NRL season. 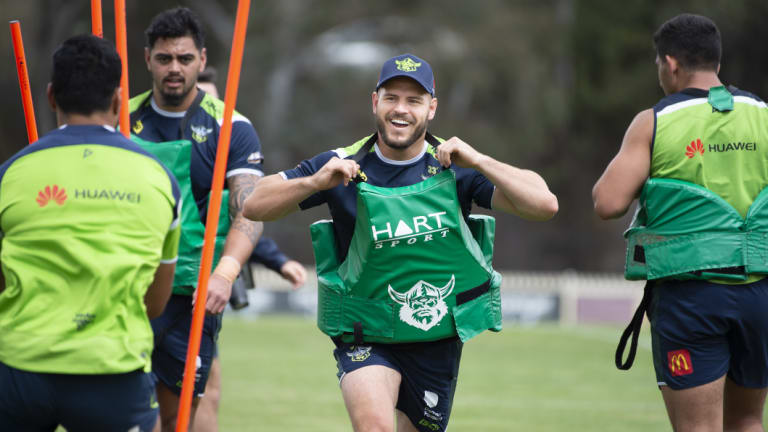 Raiders half Aidan Sezer says himself and Sam Williams have to step up.Credit:Sitthixay Ditthavong

Hingano would've spent this pre-season challenging Sezer and Williams for a spot in next year's starting side, but his injury playing for Tonga against Australia last month has ruled him out until about round five.

It means the Raiders only have inexperienced back-ups in Paul Roache and Brendan O'Hagan in the wings.

"[Hingano's] a promising player and he's got a big future ahead of him," Sezer said.

"He's only young still, that's probably the positive to come out of his injuries, but hopefully he can get his shoulder right and get back on the paddock as quick as he can.

"There isn't much depth in the halves and we're [Williams and I] two experienced players now so we need to step up. Hopefully lead at training and transition that on to the field."

The loss of Junior  Paulo (Parramatta) and Shannon Boyd (Gold Coast) means the Green Machine 2019 edition will be a trimmed down version of this season's team.

Havili will spend his pre-season making himself a versatile member of that unit.

He's already shown he can mix being a back-up hooker to England international Josh Hodgson in with playing as a ball-playing lock in the middle as well.

While the NRL has ruled out reducing the number of interchanges for next year, the 25-year-old revealed the Raiders had already changed their game plan to have a more mobile pack.

"A different pack this season. We've lost a bit of size with Junes and Boydy gone, but the coaches know what they're doing with the way we want to play," Havili said.

"There's a new tactic we're going in with next year, just with the way we play in the middle, a bit more mobile, a bit faster middles in there. That's what we're working on."

They're also working on their defence as a priority, with Havili saying the plan was to have that sorted before their internationals return in January.

Getting their defensive systems in place before they return was the goal.

While they've boasted one of the best attacks in the NRL, defence has been an issue for the Raiders for a few seasons.

"We're just preparing ourselves for what we can be better at. We lacked a lot in defence last year so our main focus this year is all about our defence," Havili said.

"If we get a head start with the boys here, the international boys come back in January and see that there's a big emphasis on defence they can jump on board too."

Austin's departure, combined with Hingano's injury, is why the Raiders are in the market to bolster their halves depth.

They've been linked to New Zealand Warriors halfback Shaun Johnson, but he's unlikely to end up in Canberra.

"It's been different, it's been quieter in the dressing sheds, not too much banter getting around these days," Sezer said.

"I wish him the best at Warrington and I'm sure he'll perform well there."