The AFL women’s competition has a problem. Two rounds into the third season of the AFLW and there is an alarming disparity in strength between the league’s two conferences. 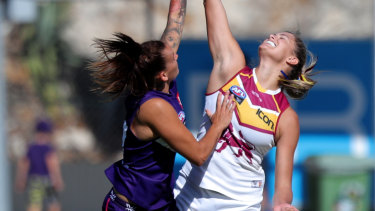 Disparity: The Dockers and their fellow Conference A sides are outperforming the Conference B Lions.Credit:AAP

Six cross-conference matches have been played, and Conference A teams have beaten Conference B opposition in all of them.

It doesn’t take too deep an inspection to see how this is an issue, with an increasing likelihood that mediocre Conference B teams will take finals spots ahead of better Conference A sides.

The decision to implement conferences was controversial when announced. Many players had wanted to ensure each team played every other once, however the AFL decided against expanding the home-and-away season beyond seven rounds. 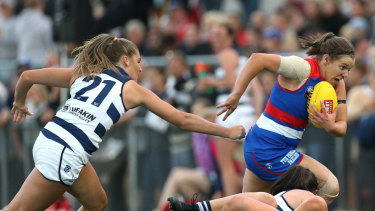 The Bulldogs are in Conference A, and comfortably beat Conference B’s Geelong on Saturday night.Credit:AAP

It was ultimately decided to split the competition into two pools of five, with teams to play the others in their conference, as well as three crossover matches against teams from the other conference. In essence, this means each club misses out on playing two others, unless they square off in the finals.

The top side from each conference will play the second-placed team from the other conference in the preliminary finals, with the winners of those matches advancing to the decider.

The composition of the conferences were based on last year’s ladder positions.

That was all well and good in theory, but there were two issues that could have been addressed better.

It is easy to say in hindsight, but why weren’t the conferences shaped to maximise equalisation? The Bulldogs, Giants, Crows and Blues in one pool, with the Lions, Demons, Magpies and Dockers in the other. That would have been similar to the AFL’s men’s finals series, where 1st plays 4th, 2nd plays 3rd, 5th plays 8th and 6th plays 7th in the first week of finals.

The disparity was exacerbated further by the fact North Melbourne – widely expected to outperform fellow new team Geelong by dint of an aggressive recruiting spree – were added to the already seemingly stronger pool.

There is an acceptance at AFL House that things don't look great at present, but it has also been pointed out that the season is still young, and things can change. For instance last year Carlton made a 2-0 start to the season but didn't win another game.

There are also factors outside the league's control. Fremantle have probably exceeded expectations this year, while the Giants are have started more slowly than tipped. In any case the two best teams should ultimately contest the grand final. It is the preliminary finals that could be compromised.

Conference B sides have a chance to hit back this weekend, with Collingwood travelling west to take on the vastly improved Dockers, the Cats heading to Adelaide for a date with the Crows, and the Lions at home to Melbourne. If the Pies, Geelong and Brisbane all win, things won't seem as dire. But if the Dockers, Crows and Dees get up, what is already a glaring gap will enter chasmic territory.