The fact Cronulla have won a big finals match in the past without inspirational leader Paul Gallen and trusty deputy Wade Graham has them believing they can produce another September boilover.

The Sharks suffered a giant blow with Paul Gallen officially ruled out Thursday night with a shoulder injury.

Gallen looked in good spirits on Thursday as he departed Sydney with his Sharks teammates, but the round-the-clock treatment was sadly ended up being all in vain. 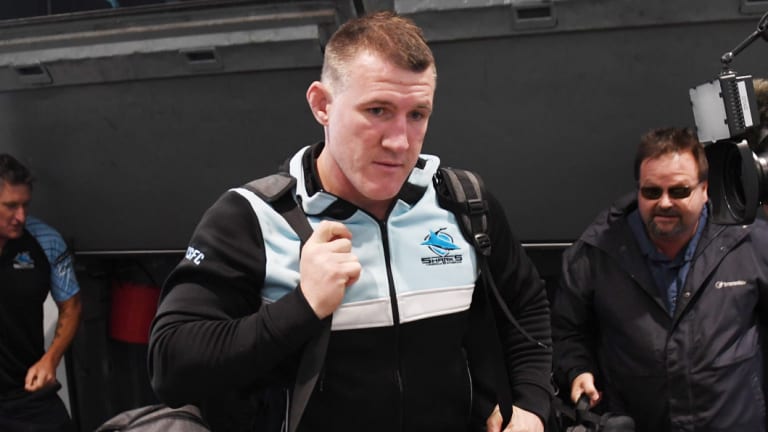 The 37-year-old was originally going to be given until an hour before kick-off to make the final call himself.

But Sharks medical staff reassessed Gallen once he arrived down south, and decided to make the early call rather than risk him breaking down in the middle of AAMI Park against the Storm.

"While the improvement in the condition of his shoulder had been considerable over the past few days, the Friday kick-off to the preliminary final will come too soon for our skipper,'' the Sharks said.

"Should the Sharks beat the Storm and win their way through to the NRL Grand Final, medical staff are optimistic Gallen will be cleared to play.''

Luke Lewis – not Andrew Fifita – will lead Cronulla against the Storm in what will be another fiery encounter.

Cronulla coach Shane Flanagan knew deep down Gallen was in strife after he failed to return to the field against Penrith last Friday. Arguably the second-toughest player in the game behind Souths Sam Burgess when it comes to pain thresholds, Gallen missed the final 30 minutes of their win over the Panthers.

Premiers Melbourne, who have already enjoyed the luxury of a week off, welcome the return of Will Chambers, Ryan Hoffman and Nelson Asofa-Solomona, and will no doubt enjoy being spared stopping Cronulla's old warhorse.

Gallen's withdrawal is also a blow for Sydney fans who had held out hope for an all-Sydney decider.

Flanagan watched his Sharks upset Canberra in the nation's capital in 2016 after Gallen was ruled out with a back injury and Graham knocked out in the seventh minute. They went on to win the premiership that season.

And with their andy record against the Storm, including down south, Cronbulla are far from fdone, despite drifting to $3.40 with bookies.

"But we've done it, in 2016 we lost Gal and lost Wade against Canberra.

"It's a different opposition this week but it can be done.''

Joseph Paulo will be brought into the team, said Flanagan, while the decision to elevate Lewis to lead the team ahead of Andrew Fifita was not overly difficult in the end.

"Andrew has a leadership role in the team. He was made captain earlier in the year but 'Lewie', Gal and Wade were all out at the time," Flanagan said.

"Hopefully Lewie gets 80 minutes and if he doesn't Andrew will take over.

"All the forwards need to stand up and Andrew will be the leader of the forward pack.''

Josh Dugan, meanwhile, trained strongly, with Flanagan now needing to decide where the international back will play if he returns at all.

If Dugan (shoulder) plays he is likely to replace one of the wingers.

"We'll give him until tomorrow as well. In the back of my mind, and this is Gal's comments as well, we need 17 super-fit players ready to go. We can't take any one in who is 85 per or 90 per cent – we need them all 100 per cent ready to go against Melbourne."

Melbourne coach Craig Bellamy took aim at Cronulla on match eve, slamming them as "holier than thou" after being upset at Flanagan's pledge that the Sharks were “just not going to put up with any of their crap”.

Flanagan was caught by surprise by Bellamy's blast, saying "the message must have got translated on the plane a bit differently when it got down there".

"We respect Melbourne more than any other team in the competition," Flanagan said.

The Toronto-bound Paulo has plenty of experience in the NRL but never played a September game.