The national body's chief also said the policy that meant the test result was kept secret, and left Australian swimming open to global ridicule, should be reviewed. 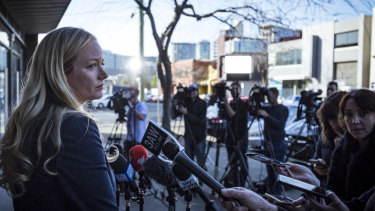 "I do want to say that while an Australian athlete returning an adverse result is both bitterly disappointing and embarrassing to our team, our sport and our country, it does not in any way change the zero-tolerance view that Swimming Australia has, and our continuing fight for a clean sport," Russell said.

Russell said she accepted that the policy could legitimately be viewed as frustrating, but that Jack had been planning to reveal her positive test after her teammates had competed at the world championships.

"We must not speak publicly … we have some very strict confidentiality agreements in place," Russell said.

"I think that's a conversation that we'd be interested in having [changing the policy] at a later stage. Particularly I think it makes it very tough for national sporting organisations to be transparent."

Russell also mentioned several times that Jack was entitled to a process.

Russell rejected a suggestion that Horton had been left with "egg on his face" after his public stance against drugs in sport on the podium last week.

"No, I think Mack has made a stand on something he truly believes in, and I think we actually have the same stance, we absolutely do not want drugs in our sport," Russell said.

"We're in a really difficult position where we're not able to inform our team, inform anybody else of the particulars of this matter. So we were in no position to let our team know at any stage up until we were able to tell them yesterday."

Asked specifically why Horton hadn't shunned teammate Thomas Fraser-Holmes, who was suspended for 12 months after missing three drugs tests – Russell said that was a question for Horton.

Russell said Jack was being well-supported by her family and would continue to receive support from SA.

Russell also said that timeframe on Jack's B-Sample could still be months away, according to ASADA.

Questioned whether the governing body had considered encouraging Jack to speak out earlier given the position she'd left them in , Russell said: "It's really not our call for us to advise Shayna on that, that is really a matter for her lawyer and her team."