Sheffield United moved to the top of the Championship on Saturday with a 1-0 win over struggling Hull City, overhauling Marcelo Bielsa's Leeds United who stuttered to a 1-1 draw at home to Brentford.

Defender Pontus Jansson had headed a late equaliser for Leeds in the day's early match but the slip-up offered a chance to the leaders' nearest pursuers, Middlesbrough and Sheffield United, to cash in. 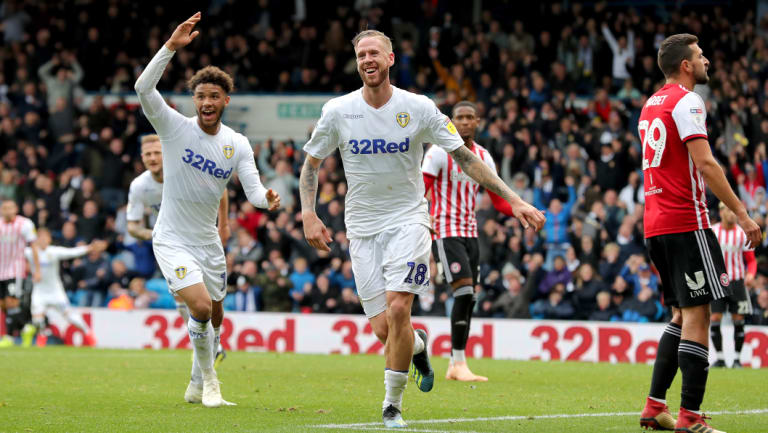 Boro missed their opportunity, losing 2-0 to Nottingham Forest at the Riverside, but the Blades made no mistake, wrapping up victory over Hull, who are now bottom of the table, with a 70th minute David McGoldrick penalty.

A fourth straight victory took Chris Wilder's side to 25 points, one clear of West Bromwich Albion, who came from an early goal down to score four second-half goals, including a double from Dwight Gayle, and hammer Reading 4-1.

In the process, the Baggies moved on to 24 points, one clear of Leeds, who have slipped to third, and two ahead of Middlesbrough. Forest moved into fifth after second-half goals from Joe Lolley and Lewis Grabban earned their win.

In an absorbing top-of-the-table clash earlier at Elland Road, Brentford's point at Leeds left them in sixth spot.

Leeds were rewarded for their late pressure after Neal Maupay had scored his 10th league goal of the season from the penalty spot to put Brentford in sight of victory.

Frenchman Maupay became the first striker in any of the four English leagues to get into double figures this season when he tucked away the 62nd-minute spot kick after Bees striker Ollie Watkins had been brought down by home keeper Bailey Peacock-Farrell.

Leeds, who have lost just one league game this season, hit back strongly and deserved their leveller when Swedish defender Jansson headed in from a free-kick in the dying minutes.

Still the drama was not over with Lewis Baker heading just wide in stoppage time for Leeds before his teammate Luke Ayling was sent off in the 94th minute for a second yellow card.