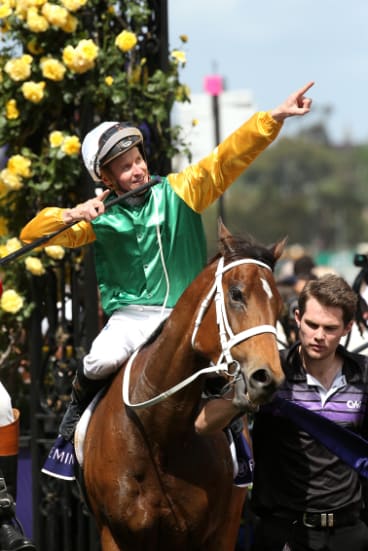 Bolted in: James McDonald enjoys his win on Shillelagh.Credit:AAP

Shillelagh has repeated her effort from 12 months ago by winning another group 1 mile on Derby Day.

This time the seven-year-old mare shot up on the inside under jockey James McDonald to blow away her rivals in the Empire Rose Stakes, a race for fillies and mares.

In 2017, it was the Kennedy Miles that she claimed when she beat perennial runner-up Tom Melbourne to record her first group 1 win.

Trainer Chris Waller said Shillelagh had been balloted out of the Empire Rose Stakes in 2017, but had no problem qualifying this season.

He knew when he saw her finish fourth in both the Epsom and Toorak Handicap that she was well placed.

Waller said he was keen to run the mare over 2000 metres if he could find a suitable race and he did not rule out a trip to Perth for the summer carnival.

With Danehill on the dam Trocair's side the push to stretch her out makes sense. 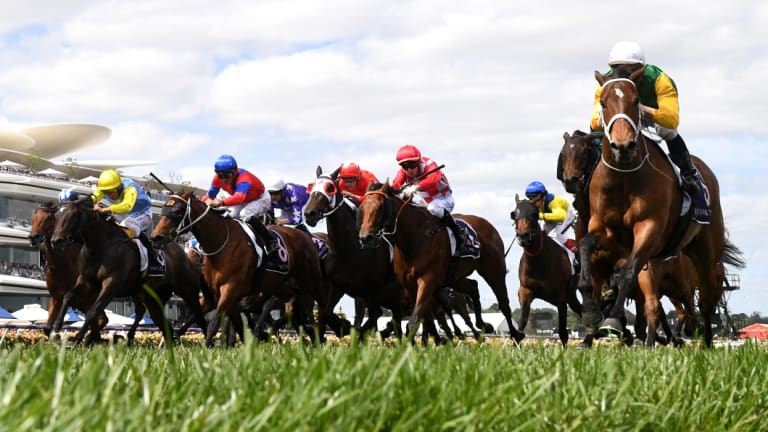 Shillelagh (right) storms to the line in the Empire Rose.Credit:AAP

An emotional Waller said it was great to win another group 1 for the owners, Chris and Susanna Grace. The two Chrises – Waller and Grace – grew up about an hour away from each other in New Zealand.

Grace has been involved in thoroughbred racing in New Zealand most of his life and owned the 2014 Wellington Cup winner Graphic.

Unfortunately for Shillelagh though she is not even the best seven-year-old mare in the stable, with Waller saying in jest that she's not as good as Winx when asked where Shillelagh sat among the best milers in the country.

But sitting below Winx's is no knock. Waller still has a huge opinion of the horse.

Bring Me Roses was an impressive runner-up with the rising four-year-old showing she could measure up as a group 1 winner as she matures.

Her jockey Damien Oliver said the winner was ‘‘just a bit too good’’ but she fought hard to finish second while Ben Thompson, the rider of third-placed filly Fundamentalist, told Racing.com the three-year-old was close to winning.

"She is such a gutsy filly as she had to do it from barrier 14. She was there a long way," Thompson said.

Fundamentalist has now been placed in nine of her 12 starts, with her only failures coming in Sydney.