Twenty20 sensation D'Arcy Short has been given the opportunity to cement a World Cup spot after being named in Australia's one-day squad for next month's tour of England.

The hard-hitting Short, who rose to prominence in the Big Bash League last summer and won an Indian Premier League contract, was named in a 15-man squad for the five-match series in England, beginning June 13. 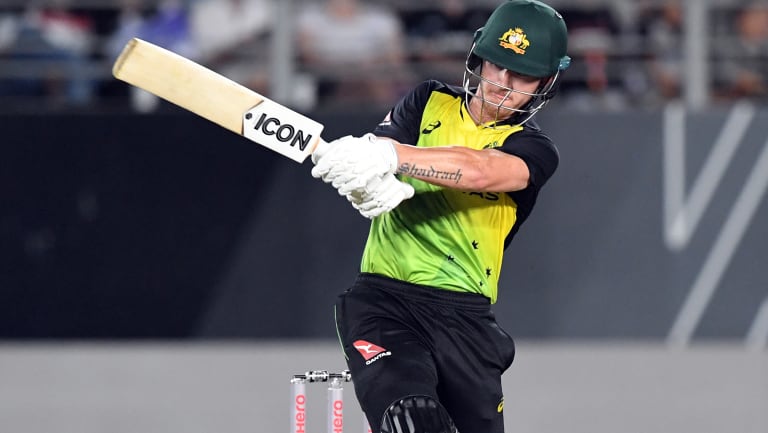 D’Arcy Short has been named in the ODI squad.

Selection chairman Trevor Hohns said Short provided an "all-round package" in a year when the focus on the 50-over format intensifies.

“D’Arcy is relatively new to one-day cricket but impressed us with his form in T20 cricket last season," he said.

“He brings an all-round package to the side, with strong fielding and bowling skills and we believe he will combine very well with Aaron (Finch) at the top of the order.”

Having been elected Test captain when Steve Smith was suspended for his role in the ball-tampering scandal in South Africa, Tim Paine will also captain the one-day international side in England. Victorian Aaron Finch will be his deputy.

“Tim is a strong leader and will captain the side for this series, supported by Aaron," Hohns said.

“A decision on a permanent one-day captain will be made in due course."

This is a new-look squad, for batting kingpin David Warner is also suspended, while Mitchell Starc, Pat Cummins and Mitch Marsh are injured.

Nathan Lyon returns to the ODI team for the first time since the tour of Sri Lanka in 2016, and will share slow-bowling duties with Ashton Agar.

“Nathan is our No.1 off-spinner and has excelled with the red ball, however he is not new to white ball cricket and deserves his chance to push for World Cup selection," Hohns said.

“England potentially have a number of left-handers in their side and we look forward to seeing what he can produce with the white ball in English conditions.”

South Australian gloveman-batsman Alex Carey was also included in the side, having debuted for Australia against England this year.

“Alex is a very smart one-day player who can also bat anywhere in the order. With Tim in the side Alex will be the back-up wicketkeeper but we believe his game is strong enough to play as a batter only," Hohns said.

Team physiotherapist David Beakley said Australia hoped to have Starc and Cummins back for the Test series against Pakistan in the United Arab Emirates in October.

“Mitchell is going to undertake a prolonged rehabilitation period for his tibial bone stress injury and we are aiming for a return to play for the Pakistan Test series in the UAE," he said.

“Pat is still recovering from a lumbar bone stress injury, the good news is that it has not progressed to a fracture but he still requires a period of rehabilitation with an aim for him to return to play for the Pakistan Test series along with Starc.”

Australia will also play one T20 in England before a short tri-series in Zimbabwe, also featuring Pakistan.

Finch was named captain of the T20 squad, with Carey his deputy. Queensland’s Jack Wildermuth and Mitchell Swepson were named in the squad for the first time.