Super Rugby coaches have called for Rugby Australia to implement a proper planning model to avoid another player availability debacle if the game's governing body wants to implement a centralisation strategy.

Rugby Australia is reportedly keen to push ahead with a model similar to the one used in New Zealand to ensure all Super Rugby franchises are working towards a common goal of improving the Wallabies. 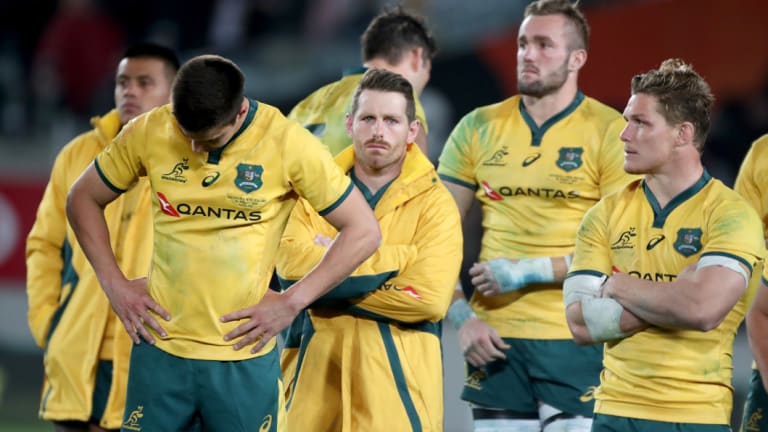 Should Wallabies players be rested during the Super Rugby season next year?

That model is set to include managing national player workloads during the Super Rugby season to ensure they do no suffer burnout, particularly in the build up to the World Cup next year.

A country versus club debate erupted in May when the Wallabies tried to force the ACT Brumbies and Melbourne Rebels to rest players before the mid-year series against Ireland.

The request was met with resistance because of Rugby Australia's lack of planning after asking the Brumbies to rest David Pocock, Scott Sio and Allan Alaalatoa just days before a crucial home game.

The Rebels agreed to give halfback Will Genia an extra week to recover from a knee injury in the same week rather than rushing him back, while the NSW Waratahs and Queensland Reds are allowed to use all of their Wallabies representatives.

There has been a push for greater collaboration between the franchises and Wallabies in the past 12 months, with Test assistant coaches regularly visiting Super Rugby training sessions.

The concept of resting players is not new to international rugby, particularly in New Zealand and Ireland, but it's still a touchy subject in Australia.

"Whatever the direction in and around resting players or Wallabies camps, I think you'll find [the Super Rugby teams] will be supportive of them. It just needs to be planned well in advance so we can limit the impact on the Super Rugby program.

"If we're having discussions now around what's going to happen in January or February, or even in May, then you can plan for that knowing that it's going to be the case.

"If that occurs, I can't see there being too many issues. We're more than happy to look at whatever the Wallabies come up with if we're planning well in advance.

"What happened this year during the season … [planning in advance] wasn't the case. We just need to learn from that."

The Wallabies lost two of their three Tests against Ireland in June and were beaten in the opening two Bledisloe Cup games against New Zealand last month.

Wallabies coach Michael Cheika is still weighing up his schedule to prepare for the World Cup next year. The Wallabies will likely have just 11 Tests left before the World Cup starts in Japan in 12 months.

Cheika asked Australia's Super Rugby coaches to start their Super Rugby season a week earlier this year to give him an extended preparation before playing Ireland.

The request was declined, resulting in the Brumbies and Rebels being asked to rest players from Super Rugby matches.

"I think if on some level everyone in Australian rugby closes the wagons around each other, rather than around ourselves, I think we've got a chance of going better," said Rebels coach Dave Wessels.

"Our end goal for all of the [Super Rugby] franchises is to see the Wallabies do well. I think if we can support that, ultimately, the benefits and confidence that comes out of that flows through to the franchise level.

"I guess we have to make some tough decisions along the way that might not be good for [individual teams] along the way, but it will benefit it us in the long term to get those results."

New Zealand Rugby and the five New Zealand franchises agreed to a deal this year to rest All Blacks players from two regular season Super Rugby matches this year.

The impact on New Zealand Super Rugby sides is minimised by the country's revolving door of talent and depth on rosters. But Australian teams would take a much more significant hit given player depth concerns.

The Rebels could be bolstered in the coming weeks if Quade Cooper decides to move to Melbourne after being exiled from the Reds squad.

"To be honest, all of us have been better [at collaboration and planning] over the past 12 months and the Wallabies have been a lot more engaged," Wessels said.

"Everything is definitely heading in the right direction and I feel really positive about it. It's just these things don't happen in five minutes, it will take some time to really get to the point where everybody is totally happy."