The Canberra Raiders are preparing to take on the competition leaders but Siliva Havili says their toughest opponents won't be donning a Red V – they will be in lime green.

The Raiders hooker believes Canberra's own mental barriers are all that stand in their way of upsetting the high-flying St. George Illawarra Dragons at Glen Willow Stadium in Mudgee on Sunday. 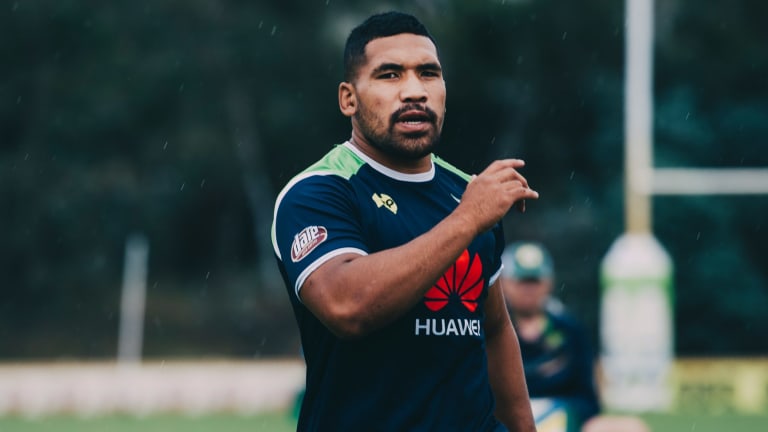 Siliva Havili says the Raiders have been their own worst enemy. Photo: Jamila Toderas

Havili says the Green Machine's inability to strike against an undermanned Cronulla outfit last week "got into our heads" and the Raiders fell in a heap with a spot in the top eight on the line.

He is confident the Raiders will be able to return to their attacking best following what Jarrod Croker dubbed a "miraculous turnaround" for star five-eighth Blake Austin, and that will help them crack the competition leaders.

"At the end of the day we lost to ourselves [against the Sharks]," Havili said.

"That’s a quick fix and hopefully we can move forward into [this] week with a bit more fluency in our attack. Behind our defence I’m sure we’ll score points, I’m sure we’ll build pressure.

"We need to give ourselves a chance and start from the first set. In the second half [last week] we wanted to put them in the corner but we gave a penalty away and it started snowballing from there.

"I reckon our defensive efforts were pretty good, we scrambled well and covered pretty well. The flipside of the attack, their defence got into our heads and frustrated us a bit.

Raiders coach Ricky Stuart admits Canberra have shot themselves in the foot four times this season after collapsing to a growing collection of last-gasp defeats.

Rugby league great Paul Vautin says an 80-minute performance is all that stands between Canberra and the upper echelon of NRL teams.

Close losses effectively doused their finals hopes last year and Vautin believes they can turn things around if they stop taking their foot off the accelerator.

"Canberra can beat any team on their day, they are one of my favourite teams to watch because of the way they play, but sometimes they just lose focus and forget the job at hand," Vautin said.

"To spend the last 15 minutes on Cronulla's line and not get the job done, they only need one try and it sucked for all the Canberra fans. I’m sure Ricky has plans but the team seems to lose focus and don't look like they know what they're doing sometimes.

"If they can play like they do for the other 65-70 minutes, they can beat anyone because they’re one of the most exciting teams to watch. It just seems like they clam up and shit themselves at the end of games.

"They can be so much better."