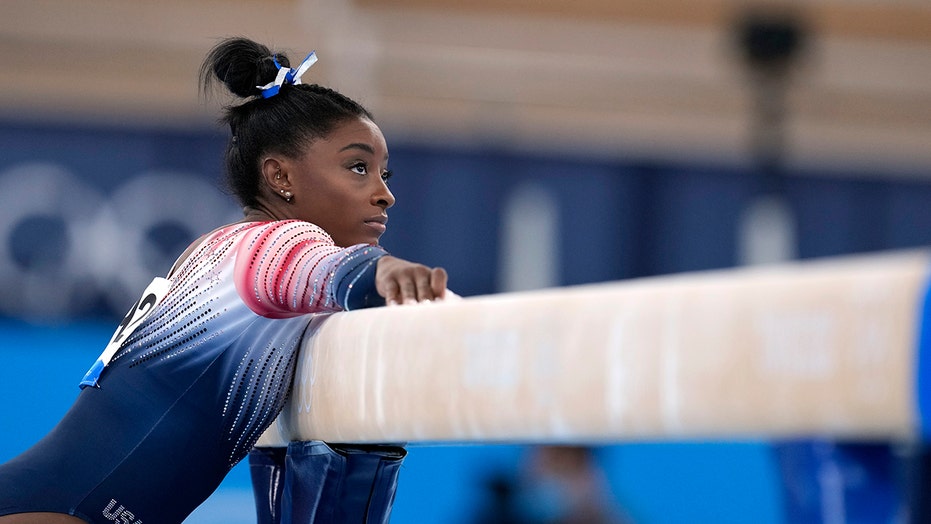 Simone Biles will leave the Tokyo Olympics without a gold medal, but will still have a piece of U.S. Olympic history.

Biles won a bronze medal in the event. She scored a 14.000 and was the third gymnast to compete. China finished 1-2 in the balance beam with Guan Chenchen getting gold and Tang Xijing winning silver. Guan had a 14.633 and Tang had a 14.233.

Biles now has seven Olympic medals, which is tied with Shanon Miller for the most by an American gymnast.

It was Biles’ first event since the all-around team final last week. Biles withdrew from the event after her vault attempt and subsequently pulled out of the individual all-around and two other apparatus events before committing to the balance beam final in the final women’s gymnastics event of the Olympics.

Biles received cheers from her gymnastics teammates as she was on the balance beam. She had one connection issue in her attempt but never slipped and never faltered.

She finished her performance with a double pike, managing to beat the “twisties” she and so many other gymnasts had talked about earlier in the week.

Biles won a silver in the team all-around last week.

Biles’ teammate Suni Lee failed to medal after losing her balance on the beam.

Last week, Biles responded to some of the criticism in an Instagram Q&A. She explained she was getting the “twisties” on the vault and floor events of the competitions and said she’s suffered through them before, and they are “petrifying.”

She answered 10 questions on her performance before withdrawing from the events before addressing the “know it alls” and the criticism she received for dropping out.

“I didn’t have a bad performance and quit. I’ve had plenty of bad performances throughout my career and finished the competition. I simply got so lost my safety was at risk as well as a team medal. Therefore, the girls stepped up and killed the rest of the competition and won silver. QUEENS!!!

“Hence why we have four team members because all of us can compete in team meet. Not just me,” she wrote.

Every former Olympic gymnast who broke down Biles’ vault was amazed on how Biles was even able to land. Biles said she was even lucky to land the trick.

I also have no idea how I landed on my feet on that vault because if you look at the pictures and my eyes you see how confused I am as to where I am in the air. Thankfully, I landed safe enough but I also don’t think some of you realize I was supposed to do a 2.5 and I only completed 1.5 twists before it looks like I got shot out of the air. Almost there but not quite … still 0.5 twist to go,” she said.

Biles added she started experiencing the “twisties” in competition.

“No this was not happening before I left USA. It randomly started happening after prelims competition the VERY next morning. By that time NO an alternate was not allowed to be placed in my position for all your ‘know it alls.’ We have four on a team for a reason. I chose to not continue team competition in jeopardizing losing a medal (of any color) for the girls/US. Also, for my own safety and health.

“For anyone saying I quit, I didn’t quit. My mind and body are simply not in sync. I don’t think you realize how dangerous this is on a hard/competition surface. Nor do I have to explain why I put health first. Physical health is mental health.”