Size no problem for hungry Andy Muirhead after Brumbies recall

ACT Brumbies winger Andy Muirhead has vowed to do the tough stuff against the Melbourne Rebels to stake his claim to be in the starting XV for the rest of the Super Rugby season.

The fleet-footed flyer has been called into the Brumbies side to replace Chance Peni, who has been suspended for give games after facing the SANZAAR judiciary last week. 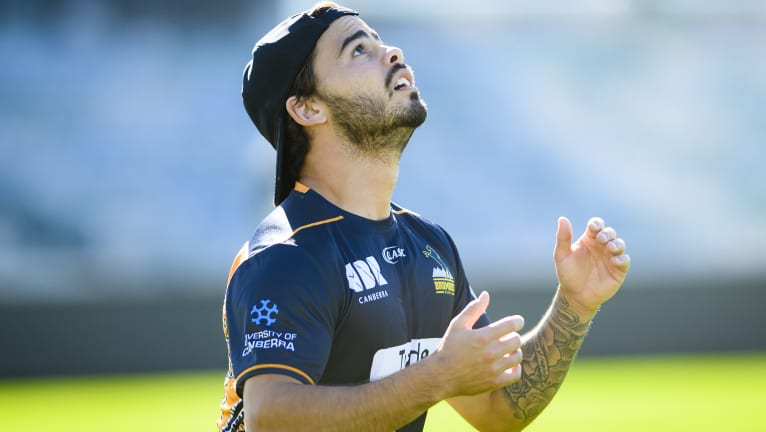 Andy Muirhead is determined to take his chance in the Brumbies’ starting side.

It opens the door for Muirhead to launch his career almost exactly 12 months after he was plucked from Canberra's club rugby competition to make an unexpected Brumbies debut.

"To be honest, I didn't know how much I would play this year," Muirhead said.

"I'm hoping by the end of the year I can say I've played a lot more. A lot has happened in the last 12 months … I'm just excited and grateful to be where I am at the moment.

"I'm pretty excited to put my hand up and try to cement a spot. If there's an opportunity, I'll jump at it. I don't want to miss opportunities because I'm lazy.

"…I sort of picture myself as someone who does the dirty work. I like to put my head down and get through it."

The Brumbies will be hoping Muirhead adds spark to a back line which has fired in bits and pieces so far this season.

The 84 kilogram back breaks the mould of the modern day wingers, who are built more like forwards. Semisi Tupou, the 19-year-old making his debut opposite Muirhead, already has a 10 kilogram advantage in the battle.

Size is probably the reason Muirhead had to walk a long path to Canberra, but the 24-year-old former delivery man is unfazed and determined to take his chance.

"I've always been the skinnier outside back. I'm not too sure if that's why I haven't got a chance elsewhere … I'm just not someone who holds weight," Muirhead said.

"I was a lot slower and my joints were hurting, so I realised it didn't work for me and I was happy to drop weight again. I don't think being light is going to hold me back."

The Brumbies have made four changes to their starting side to play against the Rebels, with Muirhead, Christian Lealiifano, Rob Valetini and Lachlan McCaffrey returning for the match on Saturday night.

Valetini and McCaffrey will add starch to the back row, but the Brumbies are also trying to cope with the loss of David Pocock (calf) and Isi Naisarani (ankle).

The Brumbies have struggled to build any momentum this year and have won just three of their nine games this season, leaving them languishing near the bottom of the Australian conference.

But beating the Rebels could be the win they need to help resurrect their year and close the gap on the Australian leaders.

Australian rugby has copped plenty of criticism this year for its long losing streak against New Zealand teams, but Brumbies coach Dan McKellar said the widespread condemnation was "over the top".

"I was really proud of our effort, the last chance we had against a New Zealand side.

"They're (New Zealand teams) certainly shutting out and winning those moments in games that are proving to be important, but I'm sick of talking about it."