Imagine being a fly on the wall as banned Australian captain Steve Smith sat in the SCG cafe on Wednesday and dissected the one-day batting line-up with pace spearheads Mitchell Starc and Pat Cummins.

Smith has not missed a minute of cricket as he serves his 12-month ban, and could not help himself turn the topic of discussion with his good mates to the poor 50-over batting form. 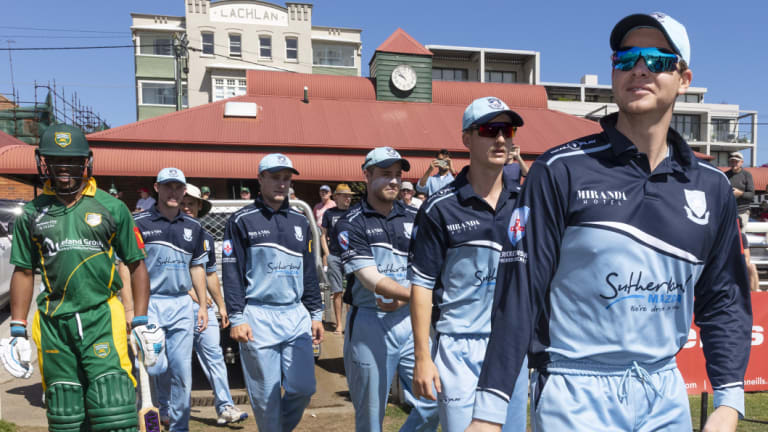 Starc also revealed he had been cut loose by his Indian Premier League contract with Kolkata – via a text message from the owners – and was unlikely to nominate for the December IPL auction ahead of a busy six months in the UK, including the World Cup and Ashes.

Smith will waltz straight back into the World Cup and England series, along with David Warner, once their bans expire at the end of March.

There has been talk in cricket circles those bans could be reviewed now Cricket Australia chairman David Peever has been torpedoed. However, any possible reduction would only pave the way for Smith and Warner to potentially return to Shield cricket, not the international scene.

Starc could not fault the spirits of Smith, who trained with the Blues ahead of their Shield match against Queensland in Canberra on Friday.

"He was training today and from all reports he's been around a bit,'' Starc said.

"Pat and I just had lunch with him as well. He's got a smile on his face. He said he's in career-best bowling form. We might see him bowl a lot more in grade cricket and when he comes back in a few months' time as well. 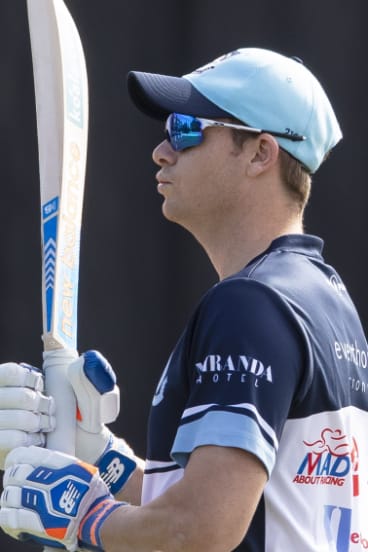 Getting his eye in: Steve Smith warms up before facing the bowling at Coogee Oval.Credit:AAP

"He's talking about having to get back and get himself a bit fitter as well. It's good to see him around with bat and ball in hand.

"He's talked about his grade cricket coming up and he's playing in the UAE [T20] League at the back end of December. There wasn't heaps about the immediate future. There was a little bit of talk about World Cup time and some line-ups there as well. It's just hanging out with 'Smithy' and good to keep him company around here at the cricket.''

Shaun Marsh tonked the only ton during the three one-dayers against South Africa, while Marcus Stoinis chimed in with a worthy 63 in Hobart. There were plenty of starts in Adelaide, which followed a dreadful display in Perth.

Settling on the batting line-up for the first Test next month is also proving a headache.

Starc said it was a shame Smith had to ply his trade in the Middle East while exiled, rather than being given the green light to play over the summer in the Big Bash League.

As for Starc, who remains one of the most devastating Twenty20 bowlers on the planet – Kolkata stumped up nearly $2 million at last year's auction for his services – he was happy to miss the T20 internationals for Australia in order to tune-up for the Indian Test series via Shield cricket.

The last time Starc, Cummins and Josh hazlewood pulled on the baggy blue, they thumped Western Australia by 171 runs, with the lanky left-armer jagging two historic hat-tricks to end both innings.

Starc knows the bowlers need to balance their workloads, and while the Indian series awaits, the 28-year-old also has one eye on the World Cup as well as the Ashes. After being cut by Kolkata, Starc is likely to freshen up for the marathon Pommy campaign and avoid the IPL altogether.

"I got a text message two days ago from the owners of Kolkata saying I've been released from my contract, so at the moment I'll be home in April,'' Starc said.

"I didn't go last year with my tibia injury and it was a great opportunity to freshen up the body and let everything heal by itself.

"That little period of time has paid off for the body. If I don't play IPL next year it's a good opportunity to freshen up for a massive six months of cricket in the UK as well.''