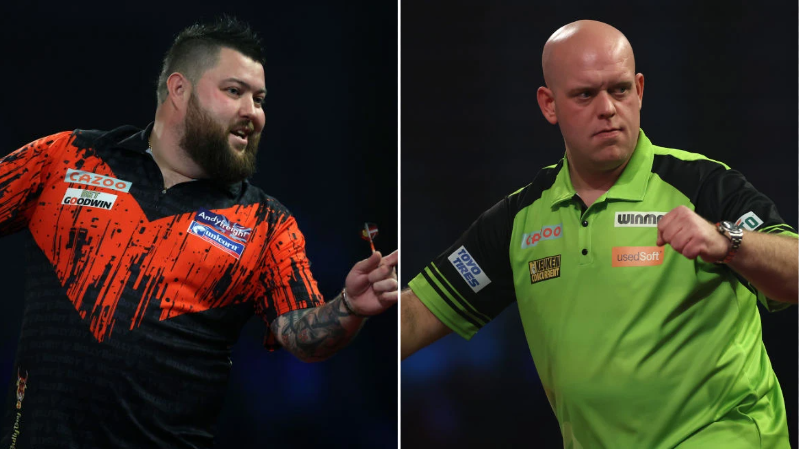 Michael van Gerwen told Michael Smith that they make up the World Darts Championship final that everyone wants to see, although the Dutchman thinks the Englishman is lying when he says he wants to face him.

Van Gerwen and Smith meet for the second time in a World Championship final on Tuesday night after both turned in superb performances in their semi-finals on Monday.

Undoubtedly Van Gerwen was the best player of 2022, with Smith arguably second to him after picking up his first major title at the Grand Slam.

Certainly they have been the two best players at Alexandra Palace over the last three weeks and MVG said to Smith before their semi-finals that another meeting between them would be the dream final.

‘I was in earlier in the practice room, Michael came over to me and said, “This is the final we all want,” me and him. I said the same thing to him,’ Smith said after beating Clemens.

‘I think everyone wants to see me and Michael. I’m over the moon that I’m a back-to-back finalist here, my third one and the only thing that’s going through my head now is lifting the big one.’

Smith is into his third world final in five years but is still looking for his first win, having lost to MVG in 2019 and Peter Wright last year.

‘If I did win it, I’d feel sorry for my liver. No, it would win everything to me,’ he said.

‘I’ll keep fighting, keep competing. If it does work out the way I want it to, like I just said, I feel sorry for some part of my body.’

Speaking before Van Gerwen’s semi-final, he added: ‘I want to play Michael, I want revenge for 2019.’

MVG is not so sure that Smith would relish playing him, given the immense form he has been showing at this tournament, and for many months now.

‘That’s not true, that’s not true as well,’ he said of Smith’s claim. ‘If I was in his position I know who I’d want to play.

‘Me and Michael know each other really well, we have such great battles against each other, for darts it will be a stunning final.’

Speaking on stage after beating Van den Bergh, Van Gerwen made his prediction for the final: ‘He is not going to stop me – nobody will stop me. I feel good, comfortable, I am playing some good darts and the crowd deserve a final like this.’