Eighteen days after Emiliano Sala’s disappearance over the English Channel, the human tragedy is approaching a point of resolution. The wreckage of the Piper Malibu plane piloted by David Ibbotson has been located on the sea bed, and Sala's body has been recovered from the wreckage, as confirmed by UK police on Friday.

While the anguish of the two men’s families endures, the uncertainty at their fate is assuaged. One senses, though, that the soccer morality tale lurking behind this terrible incident is only just beginning. 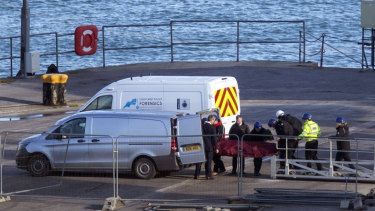 The body recovered from the wreckage has been formally identified as player Emiliano Sala.Credit:PA

It is a warning against giving soccer too much credit for exercises in vicarious grieving. Neil Warnock, who has been an eloquent, unifying voice for Cardiff through a profoundly difficult period, argues that the outpouring over Sala presents the sport at its best. He has pointedly thanked Nantes for their compassionate response in the immediate aftermath.

But this is the same Nantes who, as a body bag is lifted from the waters of the Channel, have deemed it an appropriate moment to knock on Cardiff’s door, wondering where their cash is.

The game’s gesture politics are routinely overstated. Simple details of commemoration, such as whether or not FIFA will meddle in England players’ liberty to wear the poppy, somehow assume vital significance in national debate. Arsenal were widely lauded for deciding to add Sala’s name to the Cardiff team-sheet. It was, to be sure, a poignant touch, but an easy one to exaggerate.

Nantes also displayed plenty of elegant touches in their mourning of Sala, emphasising how they felt like they had lost a family member. It took all of another week for the club, waving the financial paperwork in Cardiff’s direction, to show their true colours. 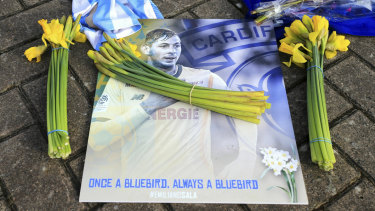 Tributes have flowed for Emiliano Sala at Cardiff City and Nantes.Credit:PA

Frankly, it is an affront to Sala’s bereft mother, father, brother and sister for any club to talk of him as family. The itinerant pattern of his career indicates that he was, in the final analysis, just a commodity to be traded. At Bordeaux, he was loaned out successively to Orleans, Niort and Caen.

His first extended stay in the French top flight, with Nantes, also came to an abrupt end as soon as the price was right. Once a club such as Cardiff are ready to spend £15 million on a player with a fairly limited track record, the only real winners are the intermediaries. Sala himself becomes just another pawn on the chessboard.

‘‘Chattel’’ is another word that has been used, such is Nantes’ conspicuous greed. This is perhaps a little extreme: Sala stood to earn £55,000 ($100,000) a week at Cardiff, which would be few people’s idea of indentured servitude.

What is undeniable is that the terms of reference have moved on with indecent haste. Before there has been even a cursory discussion about recompense for Sala’s family, Nantes are demanding to know where their piece of the pie is. 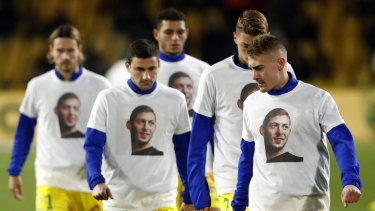 Nantes players wore T-shirts with Emiliano Sala on them before their first match after the crash.Credit:AP

Would that they had devoted such attention to establishing the whereabouts of his plane beneath the waves, instead of leaving funding for the search efforts to the goodwill of players and fans.

So many disturbing questions remain unanswered about the Sala case. Who owned the plane? Was it mechanically sound? What caused it to crash? Were there shortcuts taken in the rush to unveil him at Cardiff?

Very far down the list is the issue of whether Nantes will be suitably compensated. But as ever, money is the first subject on soccer’s lips.

Back in November, a reasonable price for Sala was to be considered to be around £10 million ($18 million). But Nantes owner Waldemar Kita, showing more than a modicum of eccentricity, more than doubled it. Into that gap rushed a coterie of agents sensing a precious opportunity. The negotiations then were as dismally grasping as they are now.

Today, there appears scarcely a thought for Sala’s relatives, whose last hope of seeing him alive has been extinguished. There is merely an impatience to see the requisite cheques signed off.

Next, with sad inevitability, will come the legal battles, as all involved parties dance around the issue of financial responsibility. And still people believe in this notion of the soccer family, of a game coming triumphantly together in extremis.

‘‘The football family comes together at times like these,’’ says the head of Cardiff’s supporters’ trust.

It is a naive view. For behind the prayers and the vigils, the scarves and the No.9 shirts, lies a web of boundless cynicism. For all the talk of class and respect, soccer can, as Nantes’ latest actions prove, be a quite startlingly classless enterprise.