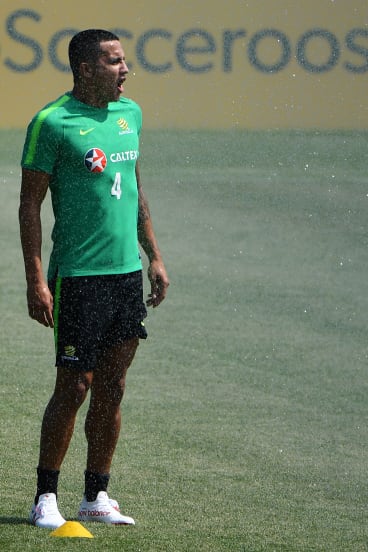 The waiting game: Socceroos legend Tim Cahill is yet to enter the game at this World Cup.

There’s a very good chance that if Tim Cahill plays against Peru, he scores. And given his penchant for the dramatic and defining it would probably be the goal that takes the Socceroos to their first round of 16 World Cup clash since 2006 (should Australia beat Peru and France beat Denmark). He could make me and a lot of others look very silly.

But there’s also a chance that the same goal could be scored by Jamie Maclaren, Tomi Juric, Mat Leckie or Robbie Kruse – it’s just the Australian public and Bert van Marwijk need to give them the freedom to do it. To his credit, van Marwijk has so far done that, but most Socceroos-watchers haven’t. Leckie is very good in the air too, you know.

If Cahill scores that goal he will become one of a handful of players to score at four World Cups. That puts him in the same statistical conversation as Pele (Brazil), Miroslav Klose (Germany) and Uwe Seeler (West Germany). A tremendous achievement. But tactically, with Cahill in the team, history tells us the Socceroos will play in a way that places all their bets on crossing the ball to the 38-year-old. After all, you might say his forehead has brought Australia more joy and riches than all the iron ore mined from the Pilbara. He rarely provides assists. Essentially all he is good for is heading in crosses from open play or set pieces.

Against a Peru defence who struggled with the aerial threat of Olivier Giroud in the last game that could be dangerous, but limiting ourselves in how we play – Cahill isn’t great when the ball is on the floor or while defending – could be a trap just as much as it could be a silver bullet. Leckie is good in the air too.

Notwithstanding that Cahill limits the Socceroos tactically, there’s also an argument there would be significant psychological advantage into the future by throwing the Socceroos into such an enormous game without the bloke we always call upon in do-or-die moments. It’s about merit. It would mean the world to this current crop of Socceroos if they were able to progress from the group stage without having to rely on Cahill. So much of what this squad has done – including winning the Asian Cup in 2015 – is viewed through the prism of, and compared to the Golden Generation, who performed so thrillingly at the 2006 World Cup.

That was 12 years ago, and still, through Cahill remaining in the squad and his presence in the consciousness of the wider Australian public, the Golden Generation’s legacy hangs over the heads of current Socceroos, many soccer-loving children on that night at Stadium Australia in 2005 and for those unforgettable matches at Kaiserslauten, Munich, Stuttgart and Kaiserslauten again in 2006.

This all might sound more like an argument of the heart than the head. The head says Cahill is Australia’s greatest goal scorer, with more of those goals on the world stage than anyone else this country has produced. But the head also says that Cahill is 38 and he couldn’t get a game for Melbourne City in the A-League. He then moved to Millwall in the English Championship, a better standard than the A-League but possibly a step down from World Cup soccer, and managed zero starts, zero goals and 63 minutes in 10 appearances. 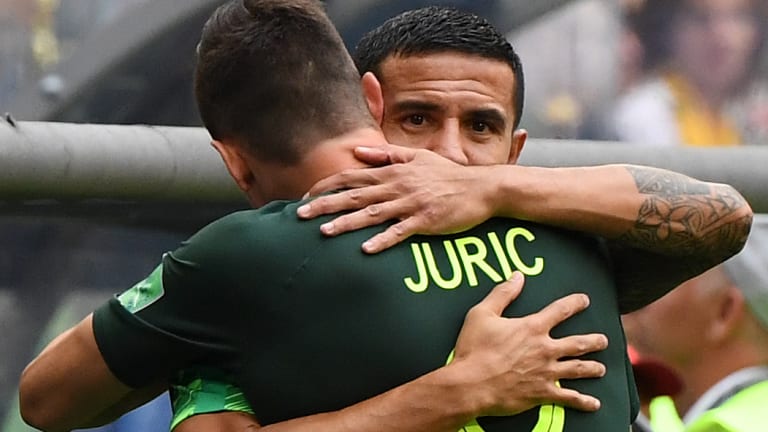 Cahill gives Tom Juric as his teammate enters the game against Denmark.

Cahill’s last 11 Socceroos goals have come against Tajikistan, Kyrgyzstan, Bangladesh, Jordan, United Arab Emirates and Syria in World Cup qualifiers. The goals against the UAE and Syria (in a two-legged do-or-die play-off) were important, but they’re hardly top quality opposition. Former coach Ange Postecoglou only played Cahill for 66 minutes across the two legs of our final World Cup play-off against Honduras, and Cahill didn’t score. It’s more telling that Bert van Marwijk, an outsider, hasn’t played him in this World Cup and used him sparingly in his four warm up matches before the World Cup, and not at all during the tournament.

Much has been made of van Marwijk not playing Cahill in Australia’s two games so far in Russia. Many feel he could have been a great help to a team chasing wins. But the person more hard done by is midfielder Massimo Luongo, although there hasn’t been widespread outcry for his lack of game time.