Al Ain: Jackson Irvine says the Socceroos will be ready to demonstrate their flexibility in the final third if Syria comes out with a "dangerous" attacking mentality as anticipated in their Asian Cup showdown.

Syria must beat Australia in Al Ain to guarantee a spot in the tournament's round of 16, having played out a 0-0 draw with Palestine before suffering a 2-0 defeat to Jordan in their two group B fixtures so far. 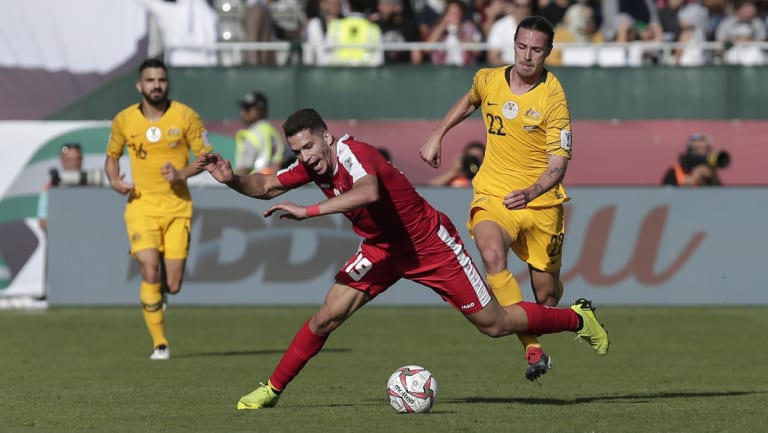 Expecting the unexpected: Jackson Irvine says the Socceroos will have an answer for whatever Syria throws at them.Credit:AP

They can still go through to the next stage even if they lose, provided they finish among the four best third-placed teams in the tournament – but the expectation is they will come out with all guns blazing, which may well play into Australia's hands.

The Socceroos have played against stacked defences in their two matches and attacked accordingly. All three of Australia's goals in the 3-0 win over Palestine were generated from crosses from wide areas.

But the prospect of a more eager Syria could give them the opportunity to play more centrally and go through a stretched defence rather than work around it.

"We're not sure obviously how they're going to approach the game but we're prepared for all these scenarios," Irvine said.

"If they do choose to come out early doors and press us high, that maybe does suit us playing a different way to create chances and attack in a different way.

"If we start the game in the same way we started the last game – positive, front-foot, picking the right moments to try and penetrate and play forward passes – then if we can get that early goal that will draw them out even further knowing they need a result. Hopefully that can open the game up even more for us to play some free-flowing, attacking football."

Irvine did not play in the World Cup qualification play-off against Syria in October 2017, but he watched both legs from the bench and knows enough about their current circumstances to be wary.

"Sometimes a change of manager tends to bring a positive reaction a lot of the time," Irvine said. "I think the biggest thing is they have a clear understanding knowing they have to win the game and that kind of makes the reins come off.

"Sometimes teams like that can be even more dangerous when they've got nothing to lose and they can play with that complete freedom to go on and try and win the game."

Irvine is in line for another start in what could be a remodelled Socceroos midfield against Syria.

Skipper Mark Milligan is likely to get the nod in defence over Matthew Jurman to cover for the suspended Trent Sainsbury, with Massimo Luongo the obvious candidate to play in midfield alongside Irvine.

"Whatever situation they throw at us, we have the experience and the individuals and as a squad to be able to deal with those threats," Irvine said.

"Whatever position [Milligan] plays, I'm sure he'll play a key role in managing the game … [he's] so vastly experienced, so much leadership skills, communication. He's a joy to play alongside in that sense."

But he may have to be content with an appearance off the bench, given how difficult it would be to drop Jamie Maclaren, Awer Mabil or Chris Ikonomidis after all three combined well against Palestine.