Finally, after two-and-a-half years, it will be a trimmed down Sia Soliola running out for the Canberra Raiders next season.

With the Green Machine about to hit the training track and ramp up their pre-season, Soliola will be looking to drop a few kilos by the end of November. 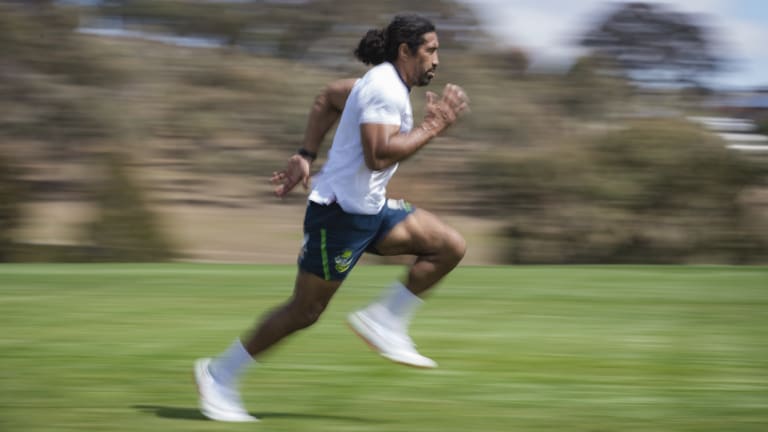 Those kegs come in the form off lopping off his luscious locks when he cuts his and his son Alesana's hair to raise money for Canberra charity Kulture Break on November 22.

He's an ambassador for the Foundation for Angelman Syndrome Therapeutics and helps feed the homeless at the Canberra City Uniting Church early morning centre, but he opted to raise money for Kulture Break because he wanted to work with a Canberra charity.

"I've done it with my first born, Israel, and I raised a bit of money over there in England and I thought I'd do the same here with this haircut," Soliola said.

"It's a group that really looks after all our disadvantaged and disabled kids … it's going to be a shave for change.

"It has [been a while]. His hair hasn't grown as quickly as what Israel's did, but we're going to give it a crack."

With the Raiders returning to start pre-season on Thursday, Soliola should have a head start on his teammates from a strength perspective as he's been taking part in #100withmontz.

Former New Zealand Warriors forward Monty Betham is doing 100 push-ups for 100 days to encourage people to get active and Soliola has come on board – as has former Raider Ruben Wiki.

"It's a little bit of fun and promoting well-being. It's come from Monty Betham and Ruben's jumped on board," Soliola said.

"I've tried to put it off, but classic Ruben he just said, 'Hurry up and do it'."

Soliola has come into the Raiders pre-season focussed, with a number of close losses still burning the versatile prop.

Canberra have missed the finals the last two seasons, finishing 10th both years, and are looking to return to the NRL finals in 2019.

That push began with testing last week before they ramp up pre-season towards Christmas.

Most of their squad started on Thursday, with the exception of the five internationals currently playing in England – Jordan Rapana, Joe Tapine, Josh Hodgson, Elliott Whitehead and John Bateman – English recruit Ryan Sutton, who will start on Friday, and the injured Ata Hingano (shoulder).

"A few of those close results still hurt so I'm looking to just get into it and just try and rectify and resolve a few things that were probably missing from last season," Soliola said.

"Yeah for sure [it motivates you]. As you get on you start to realise that this period it's a great chance for us as a group to really reflect on what we've done and what we need to do – individually and as a group.

"There's things we need to improve on and that's an exciting thing about pre-season. Everyone thinks about the tough slog and all the weather, but it's a great opportunity for young guys as well to really put their hand up and make a stand."

Raiders captain Jarrod Croker said defence would again be the focus during the pre-season in their bid to force their way back into the top eight.

They finished second in the NRL for points scored in the regular season, behind South Sydney, but were fifth for points conceded.

Throw in the fact they lost eight games by six points or less and a bit more defensive starch could prove the difference in playing finals again.

"It gets said every year, but defence is going to be a massive focus. It has to be for us," Croker said.

"We've got a lot to work on defensively. We obviously score points, I think we finished in the top three or four for points scored last year.

"We haven't lost any of that we just need to work on our defence."