If not for a pimple, Kurt Goldman would have won his first group 1 on Derby Day last year. On the hardest day of the year, in perhaps one of the hardest races of the year. Yet he walks through the famous Flemington arches 12 months on with the same horse in the same race wondering if this is the time.

"Obviously you'd cop running second in a group 1 every day of the week, especially with a mare as it adds so much value to their page as well," Goldman said after his stable star Eckstein was nosed out by Shoals in the Empire Rose Stakes in 2017. "But it's deflating. 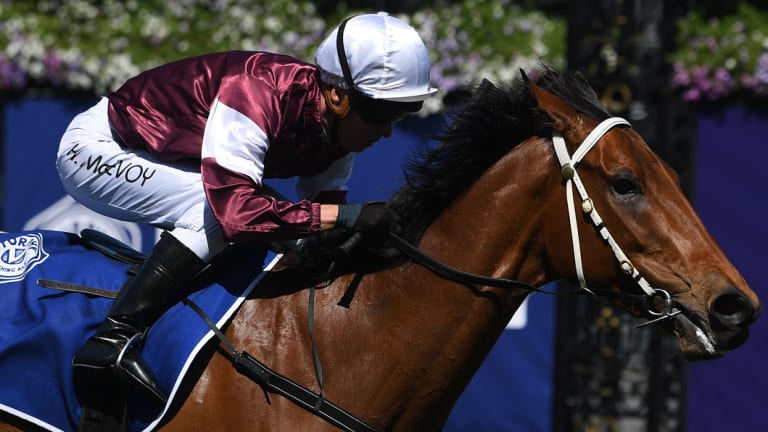 "We didn't go out and celebrate because we ran second, it was a sombre sort of experience. There's a lot of work that goes into these races, it's months of planning. When you get so close and don't win it's a bit deflating and luck is going to come into it this year."

Eckstein is not quite as shunned by bookmakers this year – she was a $16 chance with BetEasy on Friday – and won't be afforded such a wide run as she was in 2017.

But Goulburn-based Goldman fears a repeat of when a three-year-old filly carrying just 50kg bobbed their way to victory last year. This time, Oohood, Seabrook, Amphitrite and Fundamentalist will lead the three-year-old charge against the older mares.

"There was talk up until a few years ago the fillies couldn't win the race, but they've won the last two editions," Goldman said. "The horses I'd be most worried about this year would be the three-year-olds.

"The preparation [of Eckstein] has been without hiccups and everything I've wanted to achieve we've been able to do. Is she going better? I wouldn't say she's going any better, the only thing I would say is 12 months on she's probably running like a horse which definitely wants a mile.

"Last year there was a bit of a question mark over whether she wanted a mile. The only thing this year is she's a little bit more season and racing like she wants further which is a big positive."

Kerrin McEvoy was on board when Eckstein won a listed race at Flemington two starts ago, ending a winless run which stretched more than a year.

Goldman's due a change of luck after the agonising Empire Rose defeat last year having gone down in a photo finish behind Invincibella in the $1 million Magic Millions mares race earlier this year.

"It would mean a lot [to win Goldman's first group 1]," McEvoy said. "He's a gentleman and he's committed to his trade and loves his job. He loves Eckstein, I know that.

"He's tailored her campaign around this race and it will be fantastic to get the job done for him. She's in good order, it's a competitive race but we've drawn a nice marble to get a good energy saving run and hopefully we're strong at the finish. Off last year's run she can be a good chance."

Darren Weir's filly Amphitrite, to be ridden by lightweight jockey Dean Yendall as he shoots for a third straight Empire Rose win, was the $4.80 favourite with BetEasy on Friday.