OAKLAND, Calif. — Stephen Curry curled around Draymond Green into open space, comfortably separated himself from Portland’s Seth Curry and sank a 3-pointer from the left wing to stake the Golden State Warriors to an early 10-point lead.

In the first conference finals game in N.B.A. history to feature two brothers, there was only one thing left for Stephen to do on his trot back to the other end: He directed the sort of mischievous gaze he has been known to flash at opponents’ benches up into the stands instead — right at his father, Dell Curry, and mother, Sonya Curry.

“Why is Steph looking up here?” Sonya said to her seatmates in Row 8 of Section 101 at Oracle Arena, breaking into a big smile in response to her son’s showmanship.

Sonya didn’t get the full explanation until after the Warriors completed a 116-94 rout of the Trail Blazers on Tuesday night in Game 1 of the Western Conference finals. Deep down, though, she knew. Stephen was actively seeking her attention.

As Stephen later clarified on his walk to the postgame interview room: “I saw her up there cheering. I usually look up there, but it caught me off guard because I saw her Blazers jersey. She obviously didn’t know what I was saying, but I was yelling, ‘Who you with?’ after that shot.”

The answer, of course, is that Dell and Sonya were with both the Warriors and the Blazers on this first-of-its-kind evening — at least that was the plan. Immense pride tinged with a fear of the unknown was the prevailing emotion for the Currys as they uneasily tried to work out on the fly how to root for two teams at once with so much at stake for their sons.

Deciding what to wear to watch Stephen, 31, and Seth, 28, square off one series away from the N.B.A. finals, knowing fans worldwide were waiting to see, proved to be one of the easier hurdles. Michelle Brink, one of Sonya’s closest friends and a Portland resident, furnished the parents with half-and-half jerseys from both teams stitched together. 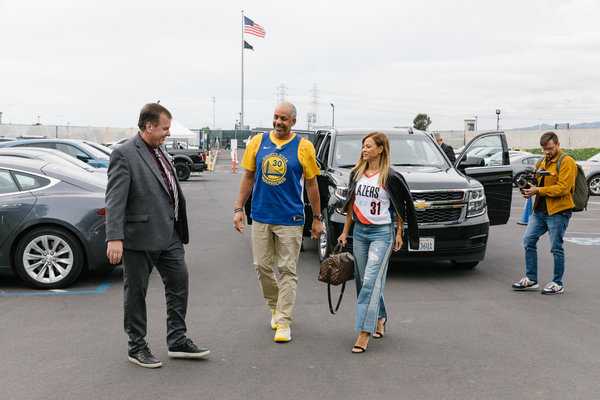 Sonya’s jersey had a Portland front adorned with Seth’s No. 31 and a Golden State back featuring Stephen’s No. 30. Dell’s was the inverse. Stephen and Seth autographed their side on each.

Everything else, though? It was new territory for the quartet sitting together: Dell; Sonya; Stephen’s wife, Ayesha Curry; and the boys’ sister, Sydel Curry-Lee, 24, who is married to Golden State guard Damion Lee. (Callie Rivers, Seth’s fiancée and the daughter of Los Angeles Clippers Coach Doc Rivers, was seated in a different location but is expected to sit with Dell and Sonya when the series shifts to Portland for Game 3.)

“I normally don’t get nervous at all,” Dell said on the half-hour drive to the arena. “Playing 16 years in the league, I thought all my nerves were gone. But this has changed that. I’m nervous.”

The Game Before the Game

Hours before the game, as the uneasiness was starting to set in, 54-year-old Dell was introduced to a new game. Sonya decided that a lunchtime round of rock-paper-scissors at Curry-Lee’s house in nearby Hayward, rather than a simple coin toss, was the fairest means to decide which hybrid jersey each parent would wear, since they both had two.

Only one problem. “That was the first time I ever played rock-paper-scissors,” Dell said.

After a false start or two, Sonya went rock. Dell opted for scissors. Curry-Lee then flipped a coin she prepared by taping a W on one side for Warriors and a P on the other side for Portland. When the coin landed on P, Sonya “won” the right to wear the jersey featuring the Blazers on the front.

Yet it wasn’t until the second half of the actual game that the mood in the Currys’ row began to noticeably lighten. The family members spent the first half working through all sorts of emotions and imagined restrictions, especially once Seth checked in for the final 2 minutes 55 seconds of the first quarter and frequently guarded his brother.

Dell noted that it was the first time in their sons’ basketball lives that he and Sonya could not go “all-in for both kids,” who never played in a competitive game against each other until both were in the N.B.A. Sonya wondered aloud how strained the postgame conversations might be when “you can’t critique the other team because then you’re critiquing one of your sons.” Curry-Lee described the dynamic as “the whole world is watching and critiquing about who we’re favoring.”

“We love the game, too,” Sonya said. “We like being spectators. When I go to a game, I like to get into the game. But now I’m like, ‘How do I get into the game when I’m trying to cheer for both teams?’”

Celebrations were thus on the muted side while Stephen was taking advantage of Portland’s spotty pick-and-roll defense to amass 19 of his game-high 36 points before intermission. Seth missed all three shots he attempted in the opening half in nearly eight minutes off the bench, as he continued to try to establish himself in the Blazers’ rotation after losing the entire 2017-18 season to a stress reaction in his left leg.

Seth and Stephen are only the seventh set of brothers to meet in the N.B.A. playoffs. This is also the first time Seth, in his sixth season as a pro, has reached the postseason, while Stephen, in his 10th season with the Warriors, is chasing his fourth championship in five years.

“I think they agree with me that the idea of it was amazing — and it is amazing,” Curry-Lee, a former college volleyball player, said of her parents. “It’s a blessing that Stephen and Seth are on the court against each other like this. But then once it gets here, you have to deal with the other feelings that come with it.”

Sitting near the Currys, especially for a game like this, means getting used to photographers suddenly appearing and posting up in the aisle next to Dell’s end seat to snap pictures of the family.

Warriors Coach Steve Kerr referred to the Currys as “the royal family of the N.B.A.” this week. Mike and Ellen Wallau, of Palo Alto, Calif., have been sitting in Row 7 of Section 101 for 23 years and marvel at their Oracle neighbors’ patience given all the attention they generate. “They’re the nicest people you’d ever meet,” Mike Wallau said.

Dell may be a broadcaster with the Charlotte Hornets in retirement, but he watches his sons’ games quietly — almost silently. What you notice most with Sonya, beyond her more vocal encouragement, is how often her sons seek to make eye contact with her during live play.

During pregame introductions, Sonya turned toward the Blazers’ bench and clapped in that direction, then tapped her heart and pointed to the sky when she and Stephen spotted each other. In the game’s first timeout, halfway through the opening quarter, before Seth had even entered the game, he strolled to midcourt and looked up at his mother to offer a firm “I’m here” head nod.

Stephen said: “Any time my family is in the building — my wife, dad, mom, sister — it’s just the kind of interaction that we have.”

When Seth rattled in a 3-pointer from the corner with 1:32 to play in the third quarter to briefly draw the Blazers within 8 points at 75-67, Sonya and Curry-Lee rose in sync to shout their approval. It was Seth’s only conversion on a 1-for-7 shooting night, but by that point much of the occasion’s earlier tension had faded.

The three Curry women had a good laugh at themselves when a multiple-choice quiz on the video board overhead during a third-quarter timeout posed the question: How many 3-pointers did Stephen Curry make this season? The choices were 263, 298, 327 and (the correct answer) 354. None of them guessed right.

Golden State pulled away in the fourth quarter with ball movement and fancy playmaking reminiscent of 2015, when it won the first championship in this run. Stephen finished with nine 3-pointers to tie his single-game playoff career high. Seth managed just 3 points in 19 minutes but had already won his parents’ admiration by getting here after last season’s injury.

“One of our sons won’t be happy with what happens, but I don’t know what they feel like,” said Dell, noting that his various teams never advanced past the second round of the N.B.A. playoffs.

Sonya said: “It was wonderful. I got to see my oldest son do what he does and be himself. I got to see my younger son in his first playoffs, going for a championship and filling his role. I feel like he did great.”

Asked how she coped, Sonya added, “I did better than I thought I would.”

Seth was predictably hard on himself afterward — “I wish I played better,” he said — but he managed a smile as he walked away from a big family huddle postgame in the bowels of Oracle. Stephen, meanwhile, said that he had an idea how “nerve-racking” it was for his parents “to get settled into what this series is going to mean,” yet he insisted they were not alone.

“A different light goes off,” Stephen Curry said, “when you see your brother across from you.”