Sorry, Ernie: Broxham will have to deny first coach for third title 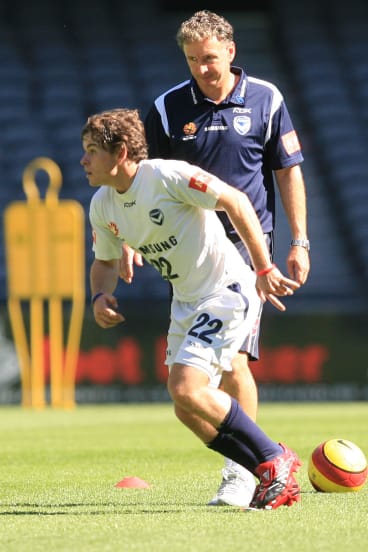 Then-Victory coach Ernie Merrick keeps a close eye on a young Leigh Broxham at training in 2007.

Leigh Broxham was the kid given his professional break by Ernie Merrick, the teenage kit man and boot boy who used to help make up the numbers in training sessions in Victory's first couple of seasons before being elevated to the squad list in the 2006-07 campaign.

Merrick used to joke that Broxham, with that puppy-like enthusiasm that youngsters given such a chance so often display, needed to be taught to toughen up. Thus he was the only player in the squad then-Victory skipper Kevin Muscat was allowed to kick and rough up during training sessions.

The Scotsman is now in charge of Newcastle Jets, Muscat is now the coach of their grand final rivals Victory – and Broxham has not looked back.

The diminutive midfielder/defender has played 263 A-League games for the Melboune side, and with Asian Champions League contests and FFA Cup fixtures the tally passes 300.

So when he says he has never played in a game like the club's semi-final triumph over Sydney – a win that has propelled Broxham to his fifth grand final in 11 seasons – it's wise to take the 30-year-old at his word.

''I’ve been around and I haven’t played in a game like it. I’ve played in extra time games and penalties but I think the way we conceded in the last second of regular time and then winning towards the end of extra time," Broxham said.

"It was something I haven’t experienced before. It was a lot of emotions because you win a game [but] you’ve got another game to play. We enjoyed the night for a few hours after and then we had to shift our focus pretty quickly.''

When a team experiences such highs and lows, ecstasies and despairs that Victory did in Sydney, there is every chance that they might be flat next time out, strung out by the emotional overload of their previous game.

Broxham acknowledges it's a possibility, but says that players must rise to the challenge.

''I think you’re a professional footballer and you’ve got to be able to deal with it and I felt we dealt with it. For Terry to do what he did and the boys to get up after that 30 minutes again it shows the character.'' 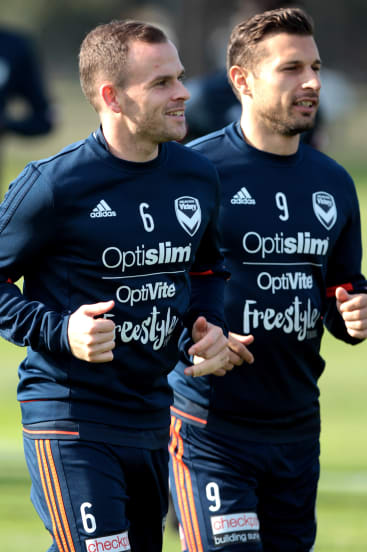 So, he was asked, was it his most memorable game?

''It's got to be up there. I’ve had some personal highlights along the way," Broxham said.

"But I think as a team it’s got to be up there in one of the craziest and most entertaining games I’ve ever played in.''

Broxham says Terry Antonis has come off the cloud he has been on since Saturday night's dramatic finale, after his wonderful solo effort atoned for what looked like being a catastrophic own-goal in the dying seconds gifted Sydney an equaliser and took the game into extra time.

''Terry is a a great bloke in the change room so I couldn’t be happier for him the way it went. He loves football and he’s very passionate, which you saw after and before.

"He’s good, I've just seen him now and he’s back to his jovial self."

Victory lost heavily against Newcastle earlier this season – a 4-1 defeat when Mark Milligan, the club's then-midfield leader, was sent off early in the match.

Broxham says little heed should be paid to that November encounter. Victory has also had the better of the Jets, winning 2-1 at AAMI Park the following month, although the Jets won the third meeting at McDonald Jones Stadium 2-0 in March.

''It doesn’t play on your mind. I think you assess it to make sure where we can get better and things that they do and they do well. We take learnings from other games and we’ll look over that over the next couple of days and move forward and make sure we’re ready and know how we can beat them.

"The stadium’s boutique, it’s perfect and I think it’ll be an amazing atmosphere and as a player it’s something you want to play in.''

Broxham says there will be little sentimentality about facing Merrick, his early mentor in the game.

"Ernie gave me my start in football, so I am forever grateful for that, but that's it. That's where it stops for me. 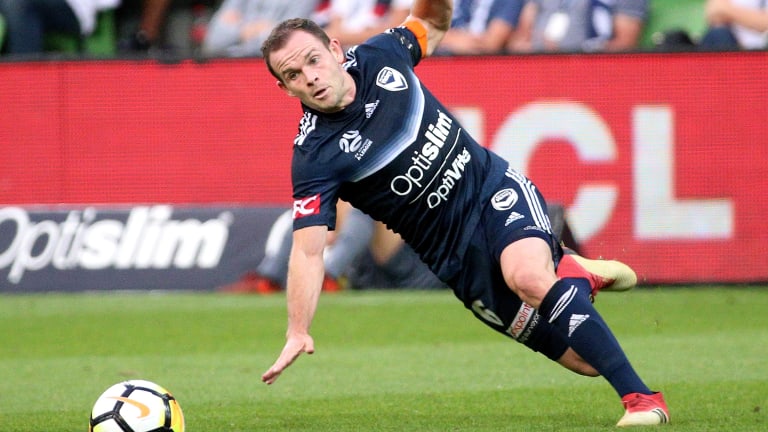 Broxham is out of contract at season's end but wants to play on and stay with Victory, his only club in a career that spans over a decade, but if they deem his time has passed he does want to prolong his career.

''We are in the process of working something out. I am happy here, I have had a lot of memories here … but football is a funny thing and you never know where you are going to end up all the time," he said.

''Players that have come and gone this year show you that. It would be a nice thing to do [retiring as a one-club player], but lets see what happens.''