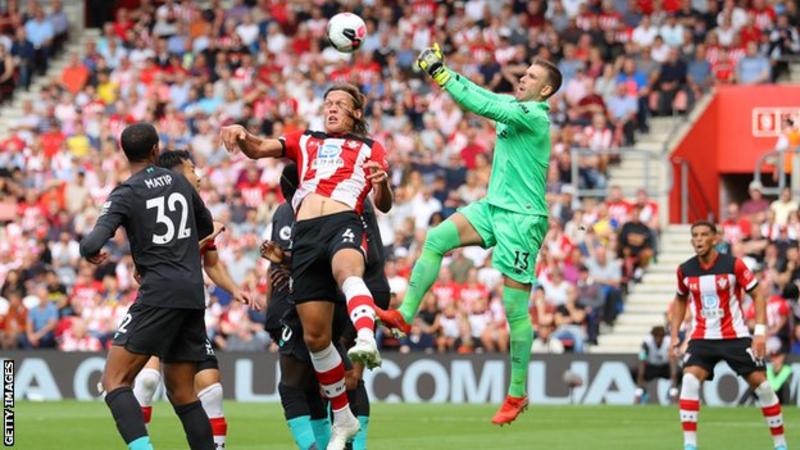 With the European champions leading 2-0, Liverpool’s number two keeper – starting in place of the injured Alisson – cleared the ball against the shin of substitute Danny Ings to gift the Saints striker a goal against his former club.

Sadio Mane had given Liverpool the lead at the end of the first-half with a delicious arrowed finish from the edge of the penalty area after Saints had gone close on three occasions.

Adrian, who was passed fit despite an ankle injury in a collision with a pitch invader following the Uefa Super Cup win over Chelsea, had kept out Maya Yoshida’s header while Che Adams then spurned two chances to equalise.

Mane turned provider to set up Roberto Firmino to double Liverpool’s advantage with a clever finish and that proved to be crucial given Adrian’s mistake in the closing stages.

Adrian’s error could have been even more costly for the Reds because in a dramatic finale Ings wasted a great chance to equalise inside the six-yard area.

With Alisson ruled out “for the next few weeks” with a calf injury he picked up in the season-opening win against Norwich City, new signing Adrian has found himself immediately thrust into the first team.

On Wednesday, the Spaniard kept out Tammy Abraham’s penalty to secure victory over Chelsea in the Super Cup.

But against Southampton, his glaring error put the recent recruit into the spotlight for the wrong reasons – and it was not Adrian’s first mistake of the afternoon.

On the plus side, Adrian then reacted smartly to make one of the saves of the game as he kept out Yoshida’s close-range header.

Alisson’s presence – alongside that of van Dijk – brought a calmness to the Liverpool defence last season and since the Brazil keeper’s injury, Jurgen Klopp’s side have looked vulnerable at the back.

Norwich scored at Anfield, Chelsea got two in the Super Cup – and could have had more – while on numerous occasions there was alarm in the Reds’ defence against Southampton, who were wasteful in punishing the visitors.

Positives for Saints in defeat

Having suffered a 3-0 defeat at Burnley on the opening weekend of the season, Southampton needed to respond in front of their own fans.

Although his side remain without a point, Ralph Hasenhuttl’s side gave the European champions a stern test that bodes well for next week’s trip to Brighton.

Adams caused problems with his pace while Ward-Prowse worked tirelessly in midfield.

Southampton have not kept a clean sheet in the Premier League for nine games and that search for an impregnable defence continued against Liverpool – but it required a strike of the highest quality by Mane to break the deadlock.

Firmino’s goal, in contrast, was a disaster as far as Saints were concerned after they conceded possession at a throw-in and were punished by the Brazil striker.

Adrian’s error gave Southampton hope of salvaging something from a game in which they more than matched last season’s Premier League runners-up for large parts.

So while Saints have not won a Premier League match since 13 April, they will be confident they can end that run sooner rather than later after this spirited performance. 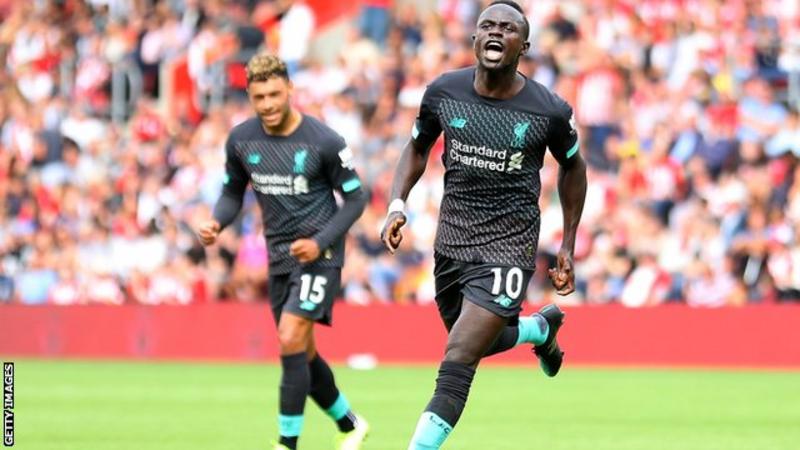 Southampton have a full week to prepare for their trip to Brighton next Saturday (15:00 BST) while Liverpool are also in action on the same day when they welcome Arsenal to Anfield (17:30).

Attempt blocked. Danny Ings (Southampton) right footed shot from the left side of the six yard box is blocked. Assisted by James Ward-Prowse with a cross.

Delay over. They are ready to continue.

Delay in match because of an injury Moussa Djenepo (Southampton).

Moussa Djenepo (Southampton) is shown the yellow card for a bad foul.

Alex Oxlade-Chamberlain (Liverpool) wins a free kick in the defensive half.

Attempt missed. Nathan Redmond (Southampton) right footed shot from outside the box is too high following a corner.

Trent Alexander-Arnold (Liverpool) is shown the yellow card for a bad foul.

Moussa Djenepo (Southampton) wins a free kick in the attacking half.

Attempt saved. Andrew Robertson (Liverpool) left footed shot from the left side of the box is saved in the bottom left corner. Assisted by Sadio Mané.

Attempt saved. Sadio Mané (Liverpool) header from the centre of the box is saved in the bottom left corner. Assisted by Trent Alexander-Arnold.

Roberto Firmino (Liverpool) wins a free kick in the attacking half.

Attempt saved. Pierre-Emile Højbjerg (Southampton) right footed shot from outside the box is saved in the top left corner.

Georginio Wijnaldum (Liverpool) wins a free kick in the defensive half.

Attempt missed. Danny Ings (Southampton) left footed shot from outside the box is just a bit too high. Assisted by Nathan Redmond.

Attempt missed. Roberto Firmino (Liverpool) right footed shot from the centre of the box is close, but misses to the right. Assisted by Sadio Mané.

Attempt missed. James Milner (Liverpool) right footed shot from outside the box is too high. Assisted by Trent Alexander-Arnold.

Georginio Wijnaldum (Liverpool) wins a free kick in the attacking half.