Melbourne City’s American striker Jasmyne Spencer scored a hat-trick to propel her side to their first win of the W-League season, as they beat Sydney FC 3-1 in the grand final rematch.

Spencer played the perfect striker’s game at AAMI Park on Friday night, scoring in the 13th, 48th and and 60th minutes to complete her hat-trick and help atone for her team’s poor showing in their round one loss to Canberra last week. 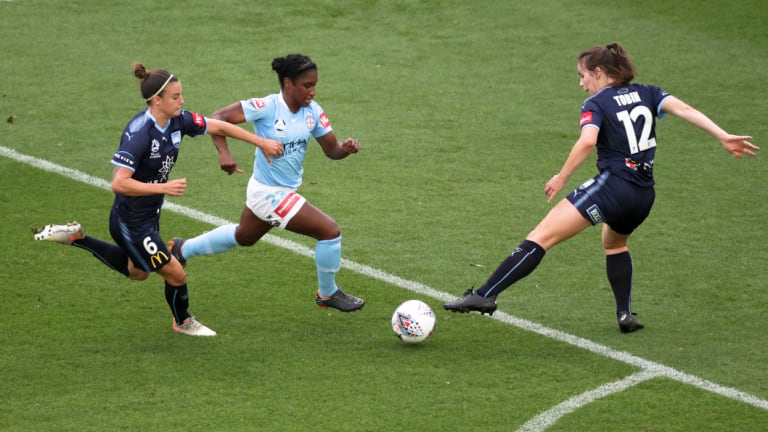 Jasmyne Spencer gave Sydney FC all sorts of worries throughout the game.Credit:AAP

Matildas coach Alen Stajcic was in the stands to run his eye over a strong Matildas contingent stepping out for both sides, ahead of the national team’s matches against Chile next week.

City’s starting XI was bolstered by the return of midfielder Yukari Kinga and the addition of Matildas’ star Elise Kellond-Knight, who returned from overseas club duties during the week. Both were brilliant. Matildas Steph Cately (knee), Kyah Simon (Achilles) and Tameka Butt (yet to arrive) remain unavailable for City. 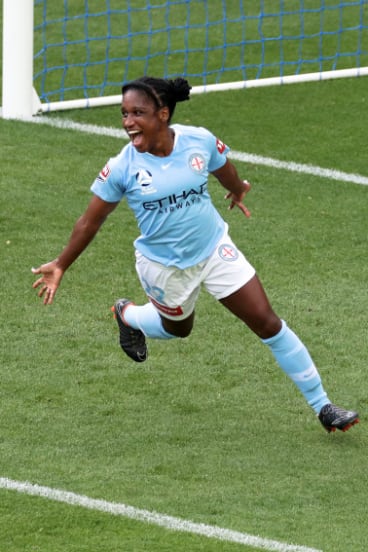 For Sydney, youngster Amy Sayer made her debut after signing from Canberra in the off-season. Sydney are still without Matildas duo Alanna Kennedy (foot) and Amy Harrison (knee).

After a slow start City kicked the game into life via the diminutive yet irrepressible Spencer, who ran slalom through the Sydney defence and finished accurately to score a beautiful goal. Chloe Logarzo gave the ball away in midfield, which allowed Tyla Jay Vlajnic to pass to Spencer to score.

However Sydney hit back eight minutes later, against the run of play, when Savannah McCaskill unlocked the City defence with a well weighted pass. Lisa De Vanna was on the end of the pass and her shot was saved by Lydia Williams, however the rebound was smashed home by Sayer.

De Vanna started the second half looking ominous and her run down the wing and cross to Sayer should have resulted in a goal, but her teammate couldn’t connect.

Less than a minute later Spencer passed to Vlajnic out wide, who quickly fed the ball to Helen Caceras. She knocked the ball inside the box and Spencer, who had followed her pass, met Caceras’ ball and smacked it into the net. 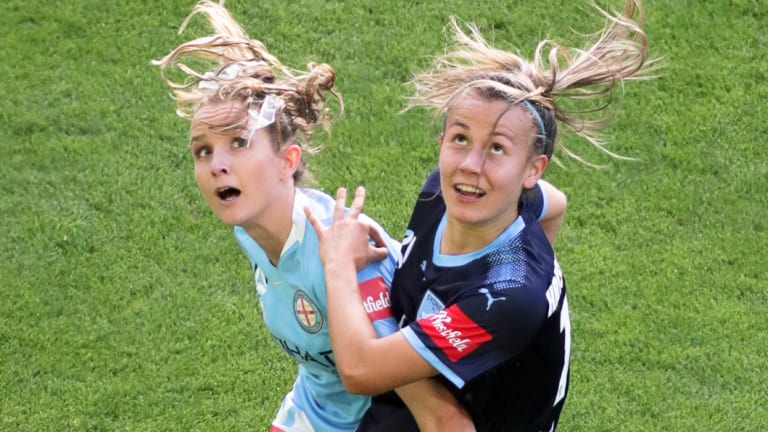 Sydney pushed again through Caitlin Foord but before she could play a teammate through on goal she was dispossessed by a superb Caceras tackle.

The ball then made its way to Rhali Dobson who played a perfect through ball to Spencer, who completed her treble.

City’s Chelsea Blissett was handed a straight red card in the 76th minute for bringing down McCaskill while through on goal, and pepper the goals as they did, Sydney could not overturn the lead.