Robbie Farah opened his eyes yesterday morning and he immediately thought of Leichhardt Oval. When he walked into the home dressing-room, the gear stewards and attendants had tears in their eyes. “I had to hold back the tears, too,” Farah said.

He burst out of the tunnel and walked towards the jam-packed Wayne Pearce Hill, which was bathed in sunshine and black and gold. This beautiful old ground has an allowed capacity of 17,000 people. The crowd figure posted late in the day was just under that. 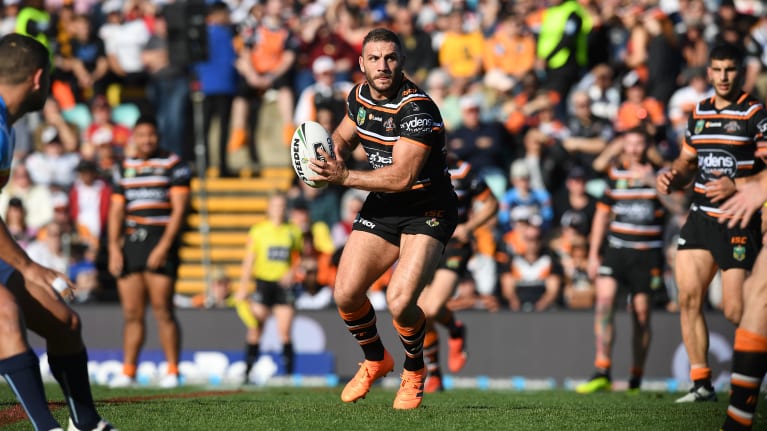 No happy ending: Robbie Farah shapes to pass on his return to Leichhardt Oval.

As Farah came towards them, a loud cheer went up. Two years ago, Farah had solemnly drunk beers sitting alone on the scoreboard after he played what he thought would be his last for his beloved club.

But now he was back, baby. He was down off the scoreboard and back to help the Wests Tigers scream into the play-offs, starting with the Gold Coast Titans.

Farah rubbed one hand on the ground, crossed himself and looked to the sky. Righto. Let’s do this …

Unfortunately, all of this beautiful subplot doesn’t mean a single thing if you don’t hold onto the ball. The Tigers struggled to do that all afternoon. They lost 30-12. They’ve now lost eight of their last 10 and sit in 10th spot on the ladder on 14 points, six adrift of the Broncos in 8th.

“It didn’t go to script,” Farah said. “It was a game we threw away. We looked good at times, created a lot of half chances. We’ve just got to learn that instead of pushing that pass to take the tackle and get them on the last play. We let them off the hook. Another day, we run in seven or eight tries. That’s something we have to learn from very quickly because our season is on the line.

“When you place yourself under that much pressure like we did, I think fatigue set in. Off the top of my head, I don’t know what our completion rate was, but it was nowhere near where it needed to be. It would have even 50 or 60 per cent. That probably took its toll at the back end of the game.”

Good guess. The Tigers’ completion rate was 59 per cent. You can’t win footy matches, let alone qualify for the finals, dropping that much ball.

“There was a big crowd and a big occasion today and it must’ve got to us,” Tigers coach Ivan Cleary said. “You’d think as some point we’d be able to correct it throughout the game. That second half we just couldn’t. Any possession we had we usually gave it back and usually in an encouraging position where we’d made a half-break. The errors weren’t even forced … we forced our own errors, not them.”

Early on, the Tigers looked like they were going to go on the Sunday afternoon killing spree many had predicted.

Farah gave them the punch out of dummy half they have been sorely missing for weeks. Bulldogs recruit Moses Mbye, who along with Farah was snapped up before the June 30 deadline, was easily finding gaps in the Titans defence. And his former teammate at Belmore, Josh Reynolds, was finishing them off, racing 40 metres to score the Tigers’ second try.

But the good was nullified by the bad. The Titans pack was all over the Tigers’. While Titans coach Garth Brennan thought halfback Ash Taylor’s performance was “patchy”, the young playmaker showed enough composure down the stretch of the second half when it mattered.

And still — still! — the Tigers had some hope with seven minutes left to go. They were down 24-12 when Taylor went to go down a short side and kick long on the last tackle. Farah anticipated it, stuck out a leg and managed to get the ball. He motored downfield, only to be stopped by desperate defence.

“I thought it was going to get there but then I realised I was 34 years old and probably not as quick as I used to be,” Farah said. “I looked around for a bit of support but I must be pretty quick because the guys couldn’t keep up with me.”

Instead, from the ensuing play, Reynolds put in a nothing kick and the play fizzled out. That’s when the Leichhardt faithful got up and walked out.

The smart money is on 28 points being enough to get into the final eight. That means they need to win six of their last eight games to get there. They play the Dragons and Souths twice in that time.

“We can’t worry about all those results,” Farah said. “If we win six or seven of our last eight, it is tough but you never say never. I’ve been brought back here to do a job and to help us win games and I couldn’t do that today. While all the external things were nice, we’re here to win footy games.”